FIFA 19 Passing Tutorial | How to Master Every Pass - Dexerto
FIFA

FIFA 19 Passing Tutorial | How to Master Every Pass

Passing in FIFA 19 provides users with different ways to build up their attack. Mastering more complex passes really can take your game to the next level. In this FIFA 19 passing tutorial, we will detail all twelve passing techniques that can be used in the game.

Having a wide range of passes enables players to use passes best suited to the situation. This can be a threaded through ball instead of a normal through ball if the gap between both defenders is small. This allows users to create more goal scoring opportunities.

FIFA 19 passing can provide difficulty for some players if not executed correctly. This is mainly due to complex passes needing to be very accurate in order to find your teammates. It will be better to use complex passes with assisted settings turned on. 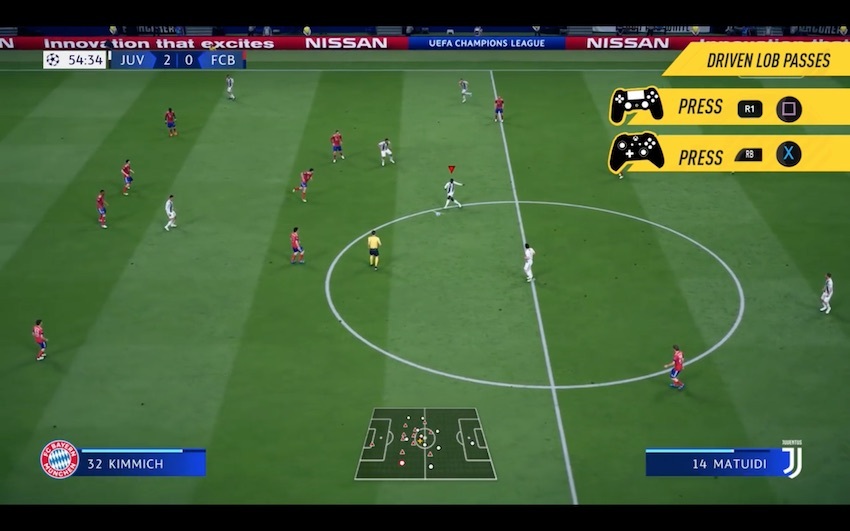 Being able to pass the ball well enables players to keep possession of the ball. Throughout a game, this is key, as your opponent’s stamina will decrease which will present more goal scoring opportunities towards the end of a game.

Users do have the option of manual or assisted passing which can be adjusted in the settings. Mastering passing in FIFA 19 using manual settings can provide better, more accurate passes, although it is more difficult. In the video below, each one of these twelve passing techniques is performed.

More: FIFA 19 Corner Kick Tutorial | How to Score from Corners

The controls for ground passes are A (Xbox) and X (PS). This is the most common form of passing and should be used when the passer and receiver are close together. The power bar requires no more than one bar for this.

One Touch Passes in FIFA 19

The controls for one touch passes are A (Xbox) and X (PS). This is best used in the final third of the pitch in order to break down your opponent’s defence. The power bar doesn’t actually require anything here as all that’s needed is a press of the pass button before you receive the ball. This is known as the Tiki-taka.

One Two Ground Passes in FIFA 19

The controls for one two ground passes are LB + A (Xbox) and L1 + X (PS). Once your player passes the ball, he will make a forward run. This is best used in the final third to get in behind your opponent’s defence.

The controls for Driven Passes are RB + A (Xbox) and R1 + X (PS). These are best used when the passer is further away from the receiver. Driven passes are very hard to intercept and are very useful for crosses when you need to get the ball to your player quickly.

The controls for this are LT + A (Xbox) and L2 + X (PS). This enables your player to perform backward passes (backheel passes) which are hidden from your opponents.

The controls for this are X (Xbox) and square (PS). This requires around 3 bars of power and is best used around your defence to switch the play.

The controls for this are RB + X (Xbox) and R1 + square (PS). This is regarded as the best type of pass in FIFA 19 and is very quick. These are best used for quick counter attacks to reach your wingers quickly.

The controls for this are LB + X (Xbox) and L1 + square (PS). These passes are quite slow but may be useful to switch the play in defence.

The controls for this are LT + X (Xbox) and L2 + square (PS). These are best used when the distance between players is short and requires around one bar of power.

Through Ball Passes in FIFA 19

The controls for this are Y (Xbox) and triangle (PS). This requires around two to three bars of power and is best used in the final third when there is space in front of the receiver to run onto the ball.

Threaded Through Ball Passes in FIFA 19

The controls for this are RB + Y (Xbox) and R1 + triangle (PS). This provides a quicker, long through ball that is very hard to intercept. This requires around three and a half bars of power.

Lobbed Through Ball Passes in FIFA 19

The controls for this are LB + Y (Xbox) and L1 + triangle (PS). This requires around three bars of power and should be used if you think that a regular through pass would be intercepted.

Knowing each of these passes and when to use them will improve your game. Passing in FIFA 19, using these twelve techniques, can be practiced in less important game modes. Once you have mastered these, you can then take them into the FUT Champions Weekend League and achieve high ranks.

Let us know the passes you’ve had most success with in this FIFA 19 passing Tutorial. Get in touch with us via Twitter.