Jeffree Star Jenna Marbles Mixer Ninja Shane Dawson Twitch What's Brewing
This week has been chock full of drama on all levels. From YouTube OG Jenna Marbles leaving the platform indefinitely to Mixer announcing its surprise shutdown, it seems like the entertainment world is turning upside down — and we’ve got all the tea you need to stay updated.

YouTubers Jeffree Star and Shane Dawson are in hot water with fans.

Who’s involved? YouTube documentarian Shane Dawson and makeup mogul Jeffree Star, both longtime content creators on the platform with a history of being called out for their older videos.

What’s the tea? This story actually began in May 2019, after James Charles was publicly called out by former mentor Tati ‘GlamLifeGuru’ Westbrook for allegedly using his fame to manipulate the sexuality of straight men.

A year later, both Dawson and Jeffree Star are coming under fire for the scandal, with Dawson publishing a statement via Twitter explaining that he’d known about Tati’s viral ‘Bye Sister’ video beforehand and hadn’t warned Charles (although he claimed the two had talked it out afterwards). Both he and Star are currently facing backlash for their involvement in the matter — especially considering James admitted he’d had thoughts of self-harm due to the drama. 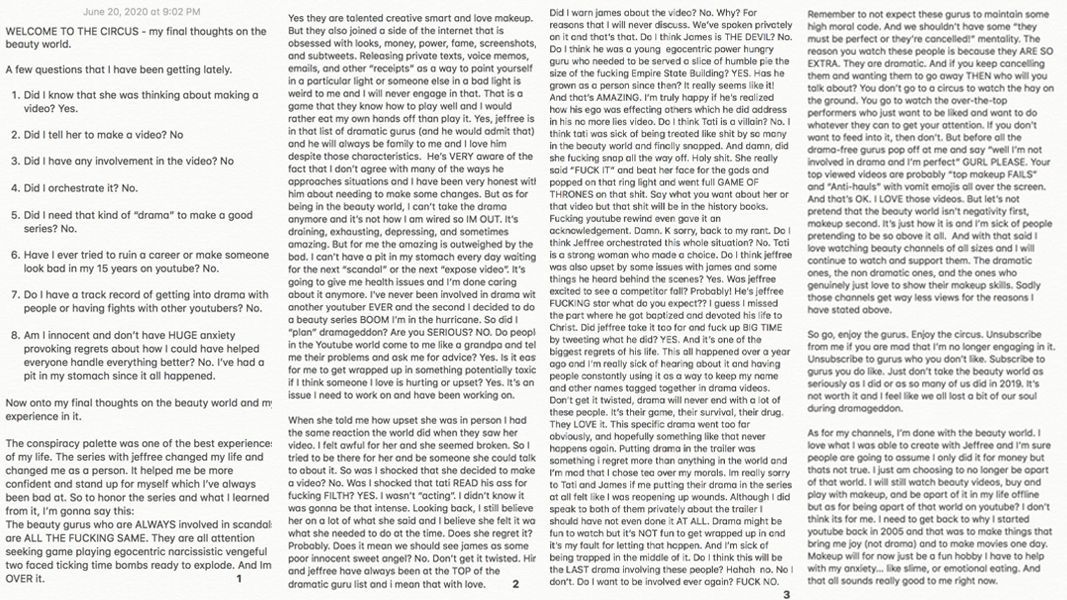 Star later published several now-deleted Tweets on the subject, and Tati teased yet another video exposing the entire ordeal, leaving fans waiting for the beauty guru to blow the entire case wide open.

Shane also released a twenty-minute-long video on June 26 dissecting his past content, where he apologized to James Charles for his comments in his now-deleted Notes post and promised viewers a “better” version of himself in future videos.

Twitch gets hit with a $25 million lawsuit over… female streamers?

Twitch is facing a $25 million lawsuit from a possible troll over “sexually suggestive” female streamers on the site.

Say what? You heard that right… Earlier this week, Twitch was hit with a whopping $25 million suit, with plaintiff Erik Estavillo blaming the platform for its “sexually suggestive” content and asking that a long list of female streamers be permanently banned, including such names as Pokimane, Alinity, and Amouranth, among others.

Why is he suing? Estavillo claimed he suffers from medical problems that render the internet as his only source of entertainment (including OCD and sex addiction), arguing that “Twitch has extremely exacerbated his condition by displaying many sexually suggestive women streamers through Twitch’s twisted programming net code, making it nearly impossible for the plaintiff to use Twitch without being exposed to such sexual content.”

Plaintiff Erik Estavillo is suing Twitch for $25 million. Here is just a part of his lawsuit toward the streaming company.

How did that turn out? Well… it seems that Estavillo has also sued other companies beforehand over similarly ridiculous complaints, so there’s no telling if he’s serious about the lawsuit or is just a massive troll.

Mixer shuts down after racism allegations

Streaming platform Mixer unexpectedly shut down following accusations of racist behavior from a former employee at the company.

What’s the tea? In possibly one of the most shocking developments of the week, Mixer, a popular competitor to Twitch, announced its unexpected shutdown on Monday, June 21, leaving a slew of streamers and employees shocked. The platform is now merging with social media giant Facebook Gaming.

Why did it happen? While it’s unclear why the decision was made, this development followed allegations of racist behavior against the company by a former employee on Twitter the day prior, who claimed that his employer had made racist comments (one of which included a metaphor calling content creators her ‘slaves’).

What about the streamers? Despite many broadcasters being left without a platform, streaming stars Ninja and Shroud apparently came out on top: Sources reported that Ninja forced Mixer to buy him out at $30 million rather than switching to Facebook Gaming, with Shroud getting a $10 million deal, as first announced by esports insider Rod ‘Slasher’ Breslau.

OG YouTuber Jenna Marbles announced that she’s taking an indefinite hiatus from creating content on her main channel after privating several of her old videos.

Who’s Jenna Marbles? For those out of the loop, Jenna Marbles is one of YouTube’s most popular OG creators, having started her journey on the site in 2010 with a wide variety of content from parodies to wild experiments. Now, Marbles is best known for creating peaceful videos with her menagerie of greyhound pups.

Why’s she leaving YouTube? On Thursday, June 25, Marbles came forward with an 11-minute-long video explaining why she’d privated her older content, addressing several videos that viewers had found offensive. These uploads included her parody of rapper Nicki Minaj, a rap verse where she appeared to mock Asian languages and a “slut-shaming” rant, among other videos.

Expressing fervent remorse for these older videos, Marbles then revealed she would be stepping back indefinitely from her channel, leaving fans and critics alike shocked at the news. While many are angered that controversial YouTubers like Jeffree Star and Shane Dawson remain on the site, others feel that Marbles made the right move.

What’s your take on the situation? Do you think Jenna Marbles made the right decision to step back, or do you feel that callouts against social media stars have gone too far?

Dr… who? Dr Disrespect is a massive name on Twitch, boasting over 4.5m followers on the platform for his humorous on-stream character as the “Two-Time Blockbuster video games champion.” He is hailed for his humorous “violence, speed and momentum” catchphrase and over-the-top special effects.

What’s the tea? Viewers the world over were shocked to find that the Doc had received a ban from Twitch on June 26, with no reason given at the time of his suspension. Sources later claimed that the two-time’s ban was a permanent one, as reported by esports insider Rod ‘Slasher’ Breslau via Twitter.

While sources are still unsure as to the reason for his ban at the time of writing, this isn’t the first time the Doc has been banned from Twitch, as he was also suspended in summer 2019 after streaming in multiple bathrooms at E3. His wife also spoke out a few hours after the news broke, thanking his fans – the Champions Club – for their “love” and “kindness.”

From huge streaming platforms shutting down to top content creators being called out for involvement in past drama, this week has been a hurricane of news left and right. What are your thoughts on this week’s tea? Let us know on Twitter @DexertoTrending and comment what you think the biggest story of this week was!