Twitch streamer Immortal’s dog Arthas is quickly becoming the most popular canine on the platform with another viral incident, this time involving a banana.

During a late December broadcast, Immortal was trying to eat a banana when his dog started sniffing the fruit.

“Bro, what do you want now?” the streamer asked his companion. “Do you want my banana? Stop it, bro.”

Despite the entertainer’s wishes, Arthas continued to go after the banana, crawling all over his owner, licking the peeled fruit before eventually finding room to take a huge bite.

“You want me to pet you all the time! Now, you eat my food as well, dude,” the upset streamer laughed. “You ate my banana. Can I eat my banana one time alone, dude? Like, can you please stop?”

Right on queue, the dog continued to dig in and scooped up the rest of the banana right out of his owner’s hands. 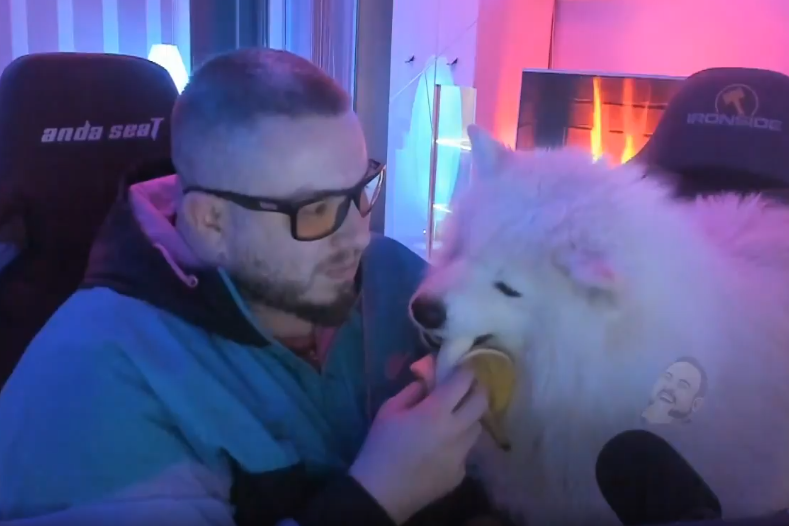 After surrendering the last bit, the defeated Immortal shrugged. “I don’t know what to say, man. I mean… you don’t have any manners,” he scolded his dog.

“I’m not dealing with you anymore,” he said as he picked up yet another banana and was stunned to see how much his dog enjoyed the treat. “You actually like it.”

Arthas made a name for himself earlier in December of 2019 after he demanded to be petted non-stop by Immortal while he was trying to stream.

Even after showing the dog affection, his four-legged friend continued to want more, leading to an adorable back and forth where Immortal eventually gave in to his cute friend’s demands.

For anyone who enjoys watching streams for animals, Arthas may very well be the most popular on the platform if he continues with the hilarious interactions with his owner.