YouTuber and Podcast host Adam22 accused rapper and record producer Russ of sending “3 big ass dudes” to attack him, and Russ has now admitted he was responsible, in a flurry of tweets between the pair.

It all started when Adam22 sent out a tweet recalling a story from six months ago, when he was attacked by unknown assailants, which he only found out were sent by Russ when the rapper “bragged about it”.

“Russ sent 3 big ass dudes to my store to jump me like 6 months ago. They waited around all day til I went to get a manicure and I was alone. Dude punched me once and ran. I didn’t even know who it was from until Russ bragged about it on AK’s stream. That ain’t tough @russdiemon.” 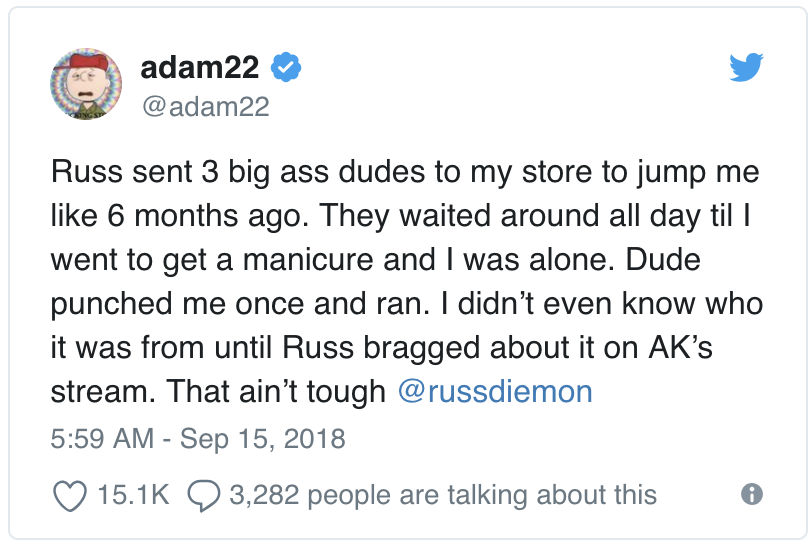 He then claimed that Russ had been provoked by a single tweet, which put the question to Adam22’s followers, “what would you rather your child get into: Xanax or Russ” – Xanax won the vote. 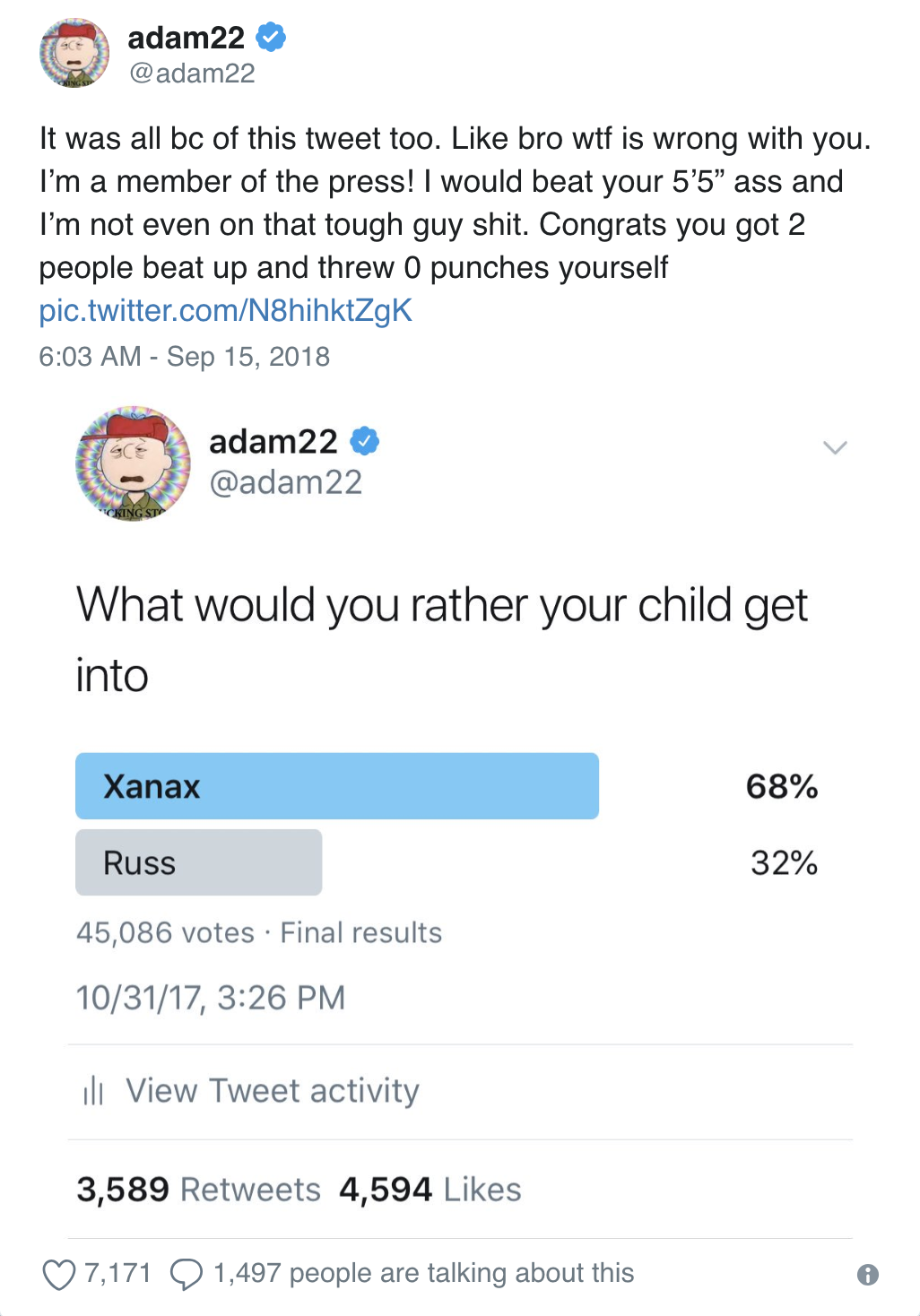 At this point, Russ then responded on Twitter, claiming that it wasn’t just this single tweet that provoked him to send people after Adam22, but rather for “constantly spewing negativity towards” him.

“Nahh it was cuz ALL your tweets aka a grown ass almost 40 year old man constantly talkin shit to someone who he’s never met or talked to, till now lol if you think there’s no consequences or reciprocation of energy for constantly spewing negativity towards someone them.” 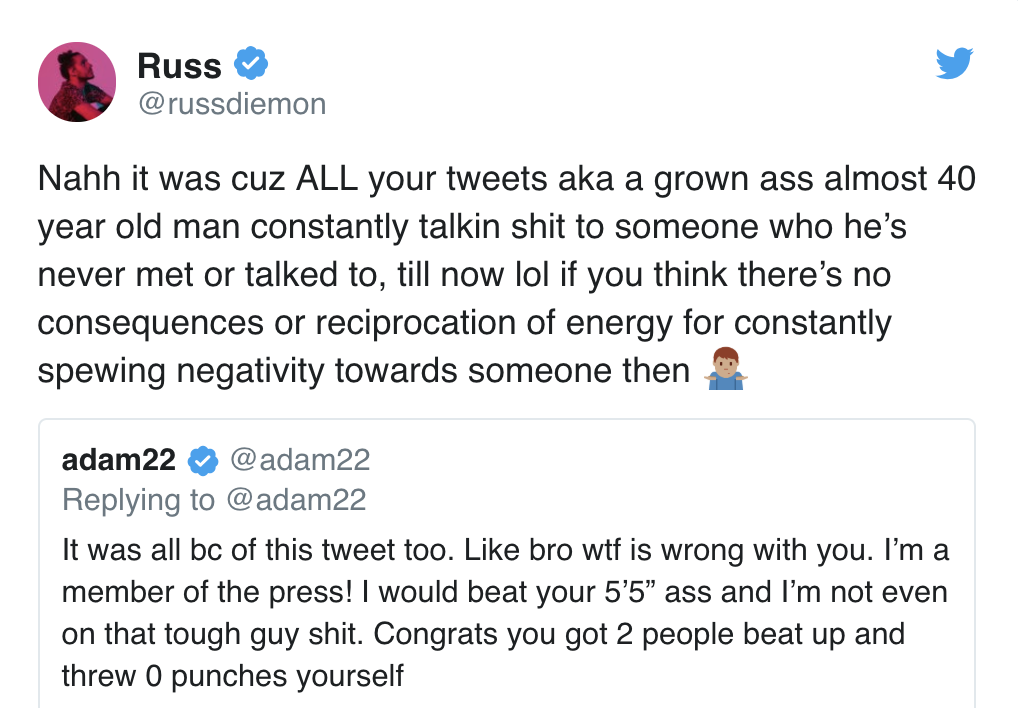 The back and forth continued, as Adam22 said even Russ’ fans “will admit he handled it like a pussy”.

“Your tweets are just as shitty as your raps. You are the Donald Trump of rap, attacks on the press should not be tolerated and based on the response I’m seeing even your fans agree you’re a bitch for this one.” 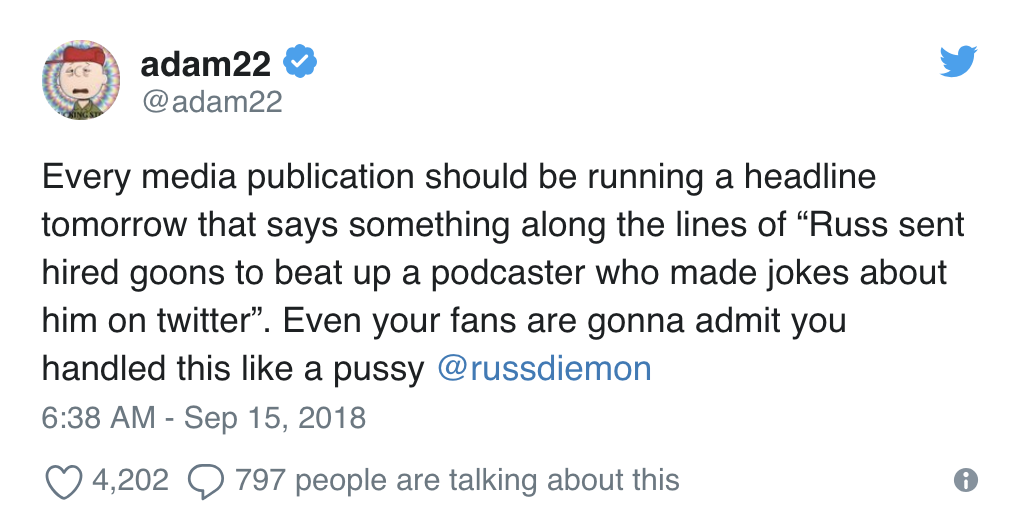 Russ then said he was tired of being the “punching bag of the rap game”, and that he eventually snapped – “everyone has a breaking point”.

“I been the punching bag of the rap game for the past year & a half. I have more to lose than 99% of the industry who has talked shit bout me so I handle things accordingly. Nothing wrong with standing up 4 yourself when uve constantly been antagonized. Everyone has a breaking point” 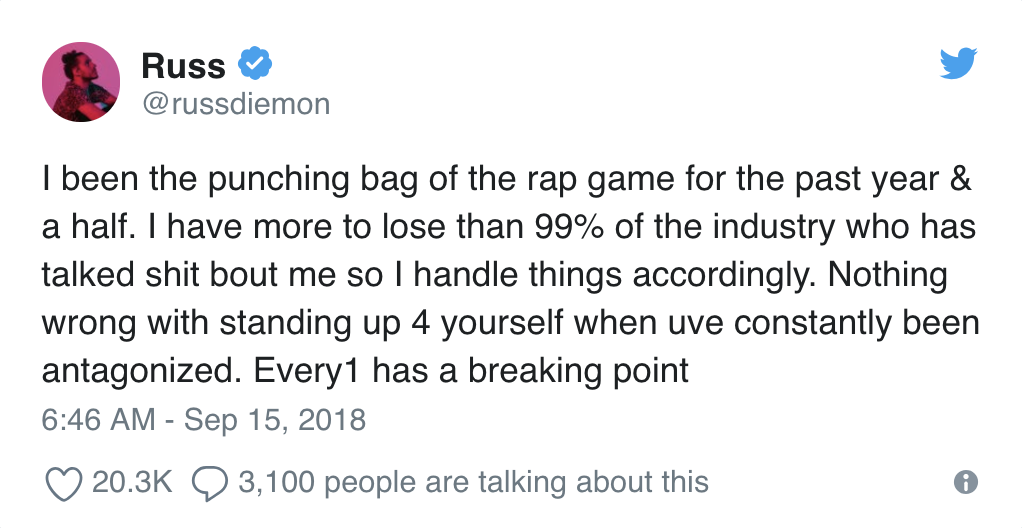 After continued back and forth, things seemed to calm down as Russ tweeted he’s “not with none of this negative shit”.

“I’m really not with none of this negative shit. That was never the message I was about or am about. But everyone has a threshold and a breaking point. You can’t poke someone constantly and expect for them to night turn around and bite.”

However, after everything seemed to be done, Adam22 posted a text conversation between one of his friends and their brother, claiming that Russ and his crew were responsible for beating a fan at a Migos show to the point where he was unrecognizable. 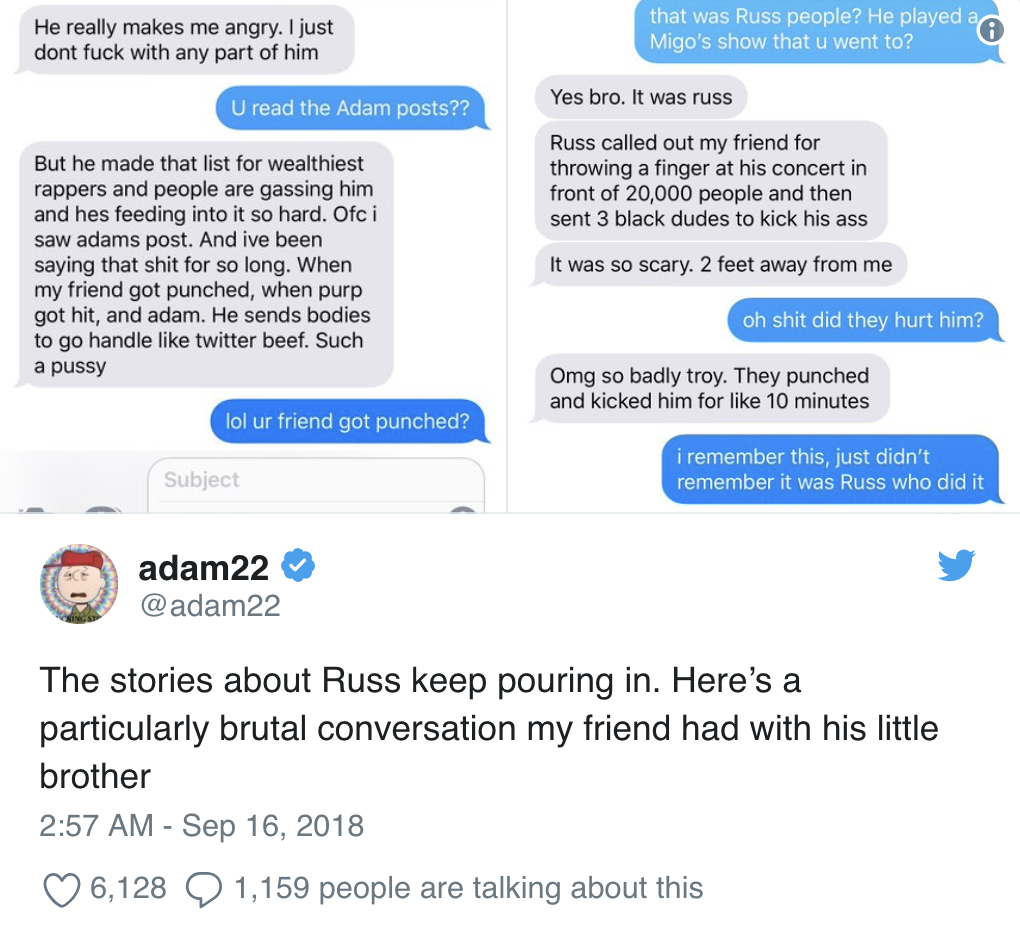 Russ has not responded to this accusation yet, and instead has gone back to using his Twitter to promote his newest music.

It is unclear if Adam22 plans to take any further action, but one thing is for sure, Russ’ attack won’t stop him talking negatively about the rapper in the future.