YouTuber Brooke Houts stirred up outrage across the net after accidentally uploading an unedited video that showed her hitting and spitting on her pet dog in early August – and while the LAPD is currently investigating the scandal, netizens are still outraged.

Multiple petitions have popped up across the net in wake of the drama, asking for YouTube to permanently ban Houts from their platform in light of video evidence showing Houts’ mistreatment of her Doberman Pinscher, Sphinx. 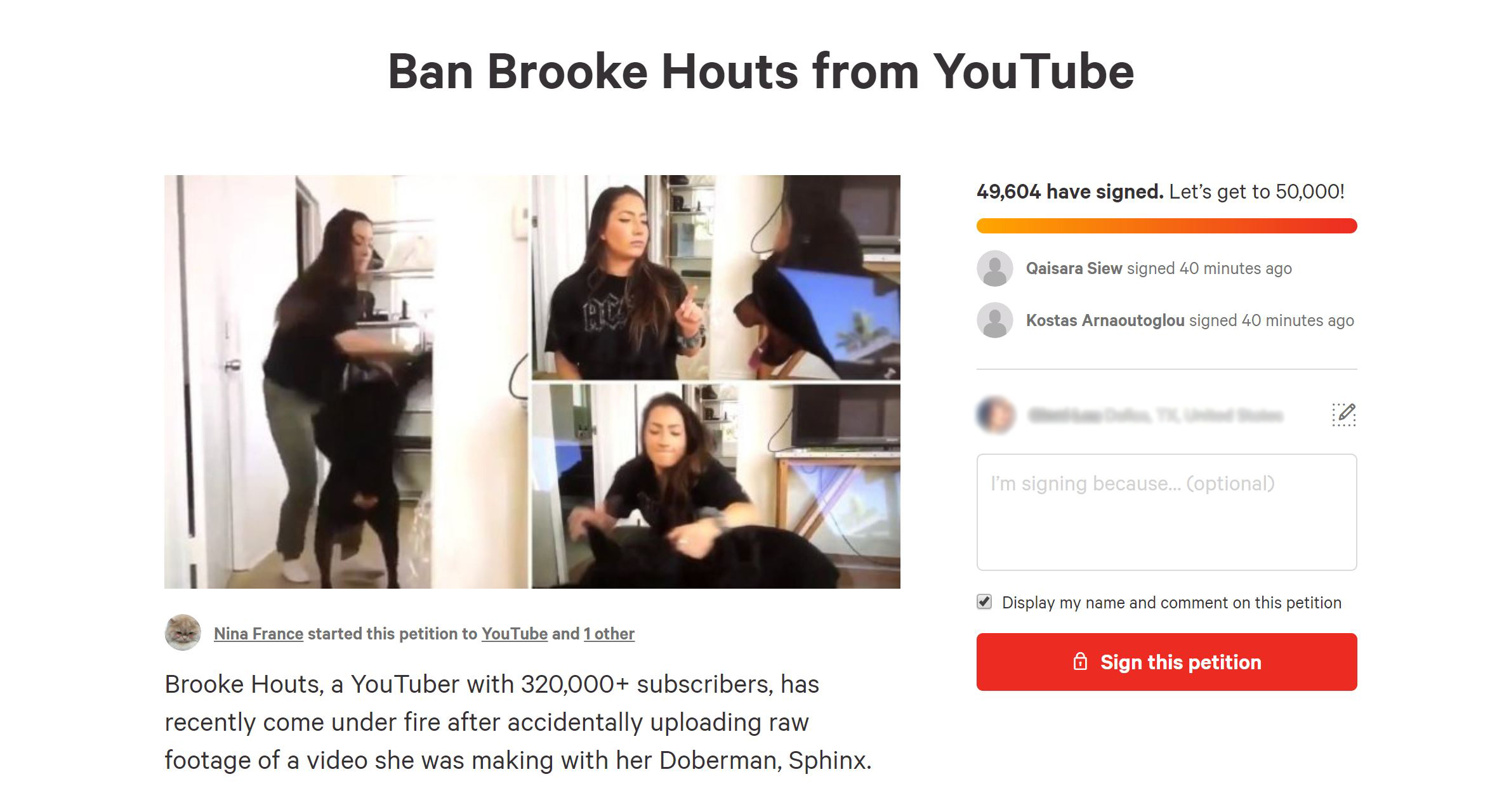 The petition calls Houts’ explanation of the alleged abuse into question, who claimed that she was in a “clearly frustrated” mood and did not spit on the animal, albeit admitting that she should not have “gotten as angry as I did in the video.”

“This wasn’t a mistake,” petition organizer Nina France wrote. “No one hits and spits on a living creature by mistake. If this is what Houts is comfortable doing on camera, what could she be doing to her dog off camera?”

France’s now-viral petition also asks YouTube to “delete her channel, her videos, any reupload of her abuse, and never allow her to have a channel or any sort of influence ever again.”

While both YouTube and Houts have yet to address the quickly-growing petition, the Los Angeles Police Department’s investigation into the matter concluded that Houts’ video does not show proof that Sphinx is in “immediate danger,” with the dog reportedly still in her care at the time of writing.

Houts’ accidental upload caught the attention of regular netizens and social media stars alike, with popular YouTuber Logan Paul condemning the abuse and H3H3’s Ethan Klein even offering to take the pup off her hands.

“…despite the hitting, the spitting is a totally unwarranted, inappropriate, and vile display of energy that makes this woman completely unfit to own that dog,” Paul Tweeted of the scandal.

2.) discipline your animals should they misbehave. i get it. but despite the hitting, the spitting is a totally unwarranted, inappropriate, and vile display of energy that makes this woman completely unfit to own that dog

“I’m in LA and will literally buy your dog from you,” Klein commented. “Name any price, he really does need a new home.”

Im in la and will literally buy your dog from you name any price, he really does need a new home.

Despite Klein’s best efforts, it looks as though Sphinx will remain in Houts’ care – that is, pending official results of the LAPD’s investigation and what becomes of the viral petition against the YouTuber.