Tyler ‘Ninja’ Blevins had a heartfelt message for Epic Games, thanking them for creating Fortnite.

The reason for the thank you may not be what you are expecting, as it does not include his rise to becoming the most popular streamer in the world.

Instead, he focused on how Fortnite has brought together his friends and family members.

Ninja mentioned Fortnite has allowed him to play games with his brothers. 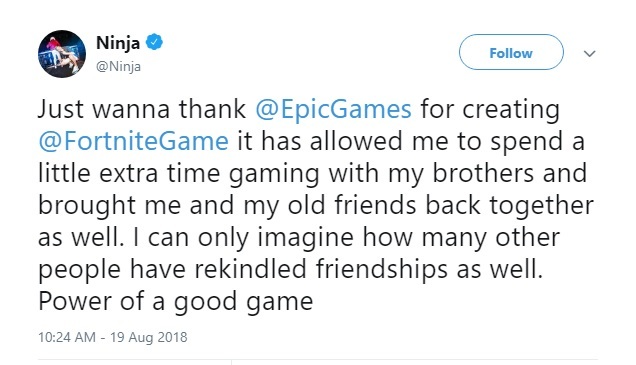 The game also brought Ninja and his friends back together for gaming nights.

He mentions how a good game has that ability to reunite friends and family and wonders how many Fortnite players have a similarly positive experience.

At least one streamer feels the same way, as Pokimane replied to Ninja with a story about how Fortnite got her and her brother gaming again.

Ninja is a former Halo pro who built the largest subscriber count in Twitch history after exploding in popularity with the advent of Battle Royale games.

His skill and personality earned him over 10.5 million followers on the streaming platform.