It’s not always that someone has a chance to livestream with a figure as popular as Bryan ‘RiceGum’ Le, and some are willing to take extreme measures for the opportunity.

On December 16, RiceGum was doing one of his signature streams which involves finding attractive females on social media and contacting them to appear on his stream via video chat.

One such female was Leslie Contreras, who goes by ‘Lesizzl’ on Instagram, who apparently chose to sacrifice her relationship with her boyfriend just so she could appear on stream with the prominent YouTuber.

“My boyfriend actually broke up with me because I told him I was doing this live-stream,” she said via facetime. “And I was like ‘are you serious’ and he said ‘yeah’ and I was like ‘bro what the fuck, ok I guess.’ That shit was funny as fuck, so now I’m single.”

RiceGum was caught off guard by that revelation, so he really could say nothing much other than “that’s lit” and “that’s hilarious yo” as he spoke with Leslie.

As expected, the chat was going wild with their comments, some more extreme than others, and it got to the point where RiceGum had to show the chat box to the female through the video.

“Look at the chat! They’re all laughing!” he said, just as Leslie was revealing that she’s now single because of her decision to make the on-screen appearance. 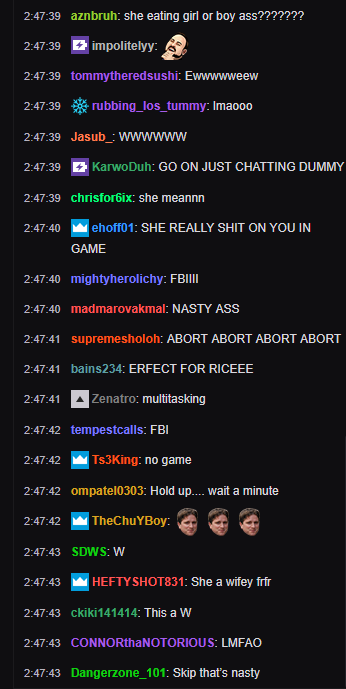 While Leslie exchanging her relationship for a chance to video chat with RiceGum seems a bit extreme, it’s not much of a surprise that attractive females would be getting in line to stream with him, especially considering how successful the YouTuber has become over the past few years.

Once a dedicated Call of Duty streamer, RiceGum has since launched a semi-successful music career, appeared in a Super Bowl ad, and is currently in the top 250 of most subscribed to channels on YouTube.

He now resides in the ‘Clout House’ in Los Angeles with fellow ‘Clout Gang’ members FaZe Banks and Alissa Violet, among others, and can certainly afford to spend time on streaming himself talking to girls he finds online.