StarLadder respond to allegations of late payments to CSGO talent

StarLadder have responded to allegations made by various CounterStrike: Global Offensive broadcasters who claim they have not been paid on time by the tournament organizers.

After a number of cryptic tweets from talent who appear on CS:GO broadcasts, Richard Lewis and Dexerto revealed that many commentators, analysts, and desk hosts had been left waiting for payments from the StarLadder Berlin Major which ended on September 8, and other tournaments held by the organization.

Henry ‘HenryG’ Greer was one of the most outspoken casters, who stated that he had yet to be paid for his work at the Major, even though he was informed that the invoice had been “taken care of” in November, and stated that he would not work with the Ukraine-based organization again until all talent had received payment. 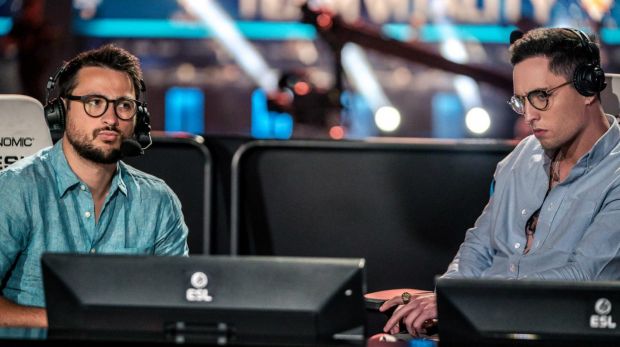 HenryG (R) claims he hasn’t received payment for his work at the StarLadder Berlin Major.

Following the reports, StarLadder have released an official statement in response to the allegations, claiming that most payments were made in November, with some completed at the start of December.

“We consider the entire cycle of StarLadder Major Berlin 2019, from Minors to the Grand Final, as one project,” the statement reads. “Usually, when we collaborate with talents, all payments are made within 45-90 days from the date of project completion. As we all know, the Berlin Major ended on September 8. Most of the payments towards talents were completed in November, two months after the Major.”

“The last payments, to SPUNJ and Machine, were made at the beginning of this week, so as per usual we’ve paid in full within three months. The transfer for HenryG was sent on November 8, but unfortunately, there was a delay in a correspondent bank. HenryG was aware of this situation. We provided all the documents confirming the payment, and also asked him to contact the bank and provide these documents in order to expedite a resolution.” 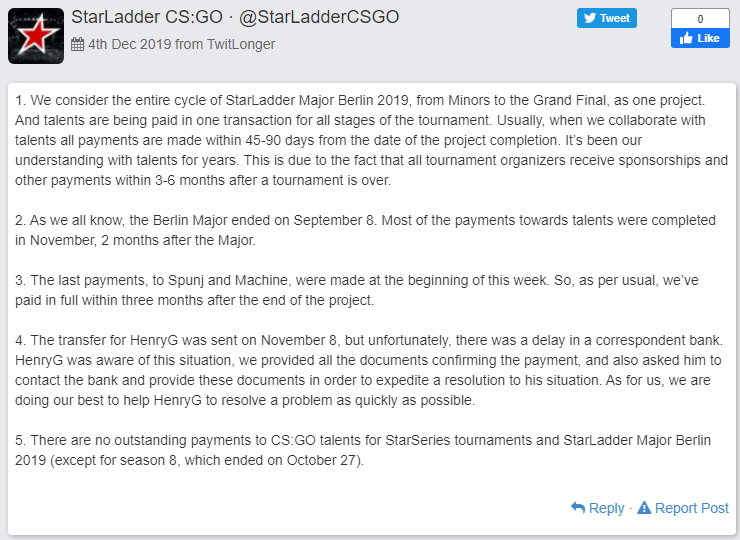 StarLadder finished their response by stating that they are “doing their best to help HenryG to resolve the problem as quickly as possible,” and that there “are no outstanding payments to CS:GO talents for StarSeries tournaments and StarLadder Major Berlin 2019,” apart from those who appeared at i-League Season 8, which ended on October 27.

HenryG and fellow Counter-Strike broadcasters have yet to respond to the tournament organizer’s statement.