A skilled Overwatch fan turned D.Va’s Officer skin into a real-life work of art with their spot-on cosplay portrayal of the Korean character.

The Officer D.Va skin first turned heads back in 2017 when it was made unlockable for Overwatch through Heroes of the Storm. Thankfully, it was later added to the Hero Gallery permanently for those who missed out, or those who didn’t want to play another game to unlock it.

Since then, the cosmetic has become a fan-favorite with fans of the hero shooter – so much so that people have turned it into real life cosplays. 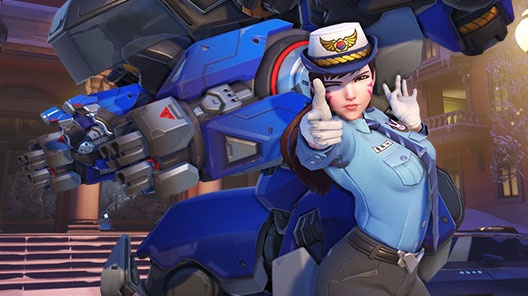 The Overwatch community is obsessed with D.Va’s officer skin.

Officer D.Va at your service

Skilled cosplayer Agnia Severina shared her take on the loveable heroine, and made her look extra fierce and in control.

In the getup, the Korean sports a blue work shirt with her iconic pink bunny motif – something that the Russian artist replicates perfectly.

Even the character’s police cap is nailed perfectly, making for an insanely accurate true-to-life rendition.

In another shot, Agnia adds aviator sunglasses to her look, making D.Va look even more authoritative and fierce than before.

The neon light signs reflected in the shades give the cosplay a more urban vibe, and makes it feel as though the Lijiang Night Market and Busan maps have come to life.

All that’s missing is the Korean hero’s Mech, which is painted blue in the game to match her outfit, and features police lights and sirens that go off when using her Boost ability.

The cosplayer is a self-proclaimed Overwatch fangirl, and boasts many other takes on her Instagram account, such as Dr. Ziegler Mercy and fan-made skin Magical Girl D.Va.

She’s built up a small fanbase for her costumes, with almost 4,000 followers on her Instagram at this time of writing.

Dr Disrespect says Fortnite is “fantastic” during stream with TimTheTatman