Two inventive League of Legends fans have brought Akali’s paint-stained neon style from K/DA’s POP/STARS video to life, alongside a brand-new look at fellow singer Kai’Sa, who appears in her own stylish neon outfit.

K/DA is a music group featuring LoL champions Ahri, Akali, Kai’Sa, and Evelynn, with vocals provided by real-life performers Miyeon and Soyeon of (G)I-DLE, Jaira Burns, and Madison Beer respectively. The Riot-backed virtual group first made their debut ahead of 2018’s Worlds with the single release of POP/STARS.

After their initial debut, the K-pop themed group, and their debut song, exploded in popularity across the world. POP/STARS went viral soon after its release, and peaked in the World Digital Songs chart’s number one spot soon after.

Riot’s K-pop inspired music group K/DA exploded in popularity ahead of Worlds in 2018.

Now, cosplay artists Sabina ‘Ichizy’ Ismailova and ‘Iona’ have brought their own “badass” style to the characters, and added an alternate neon glow to Kai’sa, who never appears in the video clip in a neon-stained costume.

Not only did Ichizy and Iona knock it out of the park with the color wash that adorned their meticulously crafted costumes, but the photo shoot in a dark room made sure the blues, greens, and sharp reds and oranges popped even brighter. 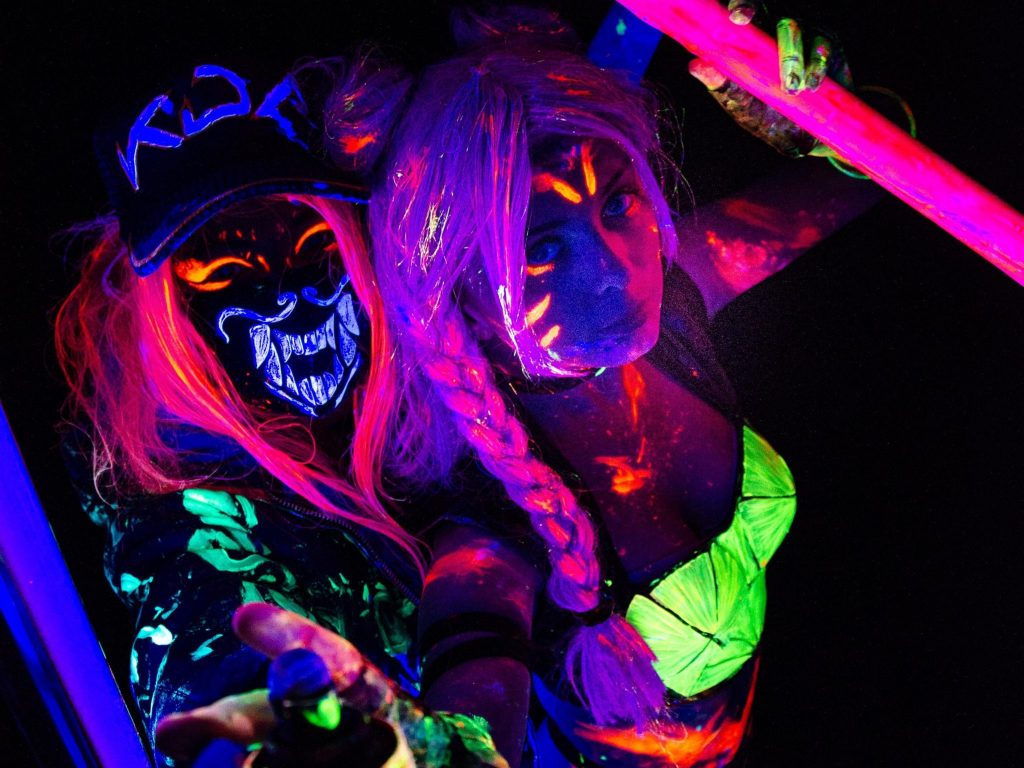 Ichizy (Akali) and Iona (Kai’Sa) both stand out in their bright neon colors. Akali’s role in the POP/STARS video clip is that of the group’s “bad girl,” singing in Korean instead of English like most of her co-stars, staining a train and herself in neon paint, and generally causing calculated havoc in the 3:22 video.

The cosplaying duo captured that essence for their own version of Akali, and the alternate Kai’sa, who appears in more regal purples and golds in the music video.

While Kai’sa’s neon styling was impressive for the fact that the cosplay pair had to build it from scratch, and really bed their own personality into the lit-up character, the real mastery was on show in Akali’s body paint and costume.

In the music group’s film clip, Akali’s paint appears to be haphazardly thrown around, with a few personal designs drawn on, including a circular symbol on her stomach, and of course her teeth-like appearance over her face mask. 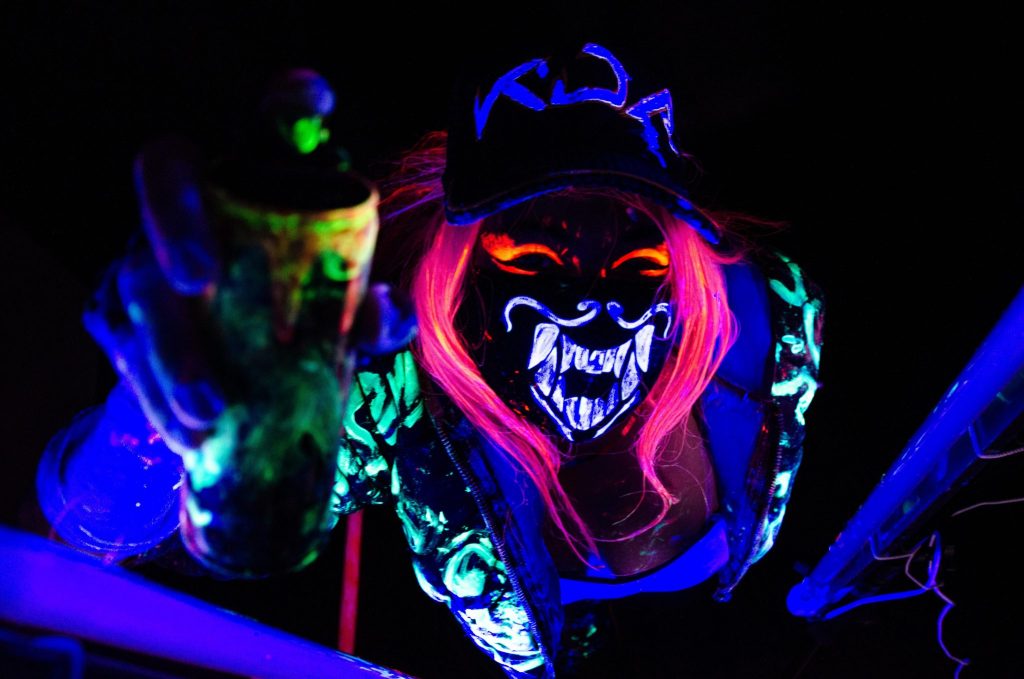 Ichizy got basically every feature of Akali’s neon K/DA appearance perfect in her cosplay.

Ichizy put both into her cosplay design, perfectly replicating the body paint of her League of Legends character, and making sure the facemask paint was correct down to the tee(th). Even Akali’s belt buckle, and one missing pant leg were there.

The only thing that appeared a little different between the cartoon music clip and the cosplay itself was the color of the character’s hair, though that can be put down to Akali’s bright-pink do being near-impossible to recreate in real life. 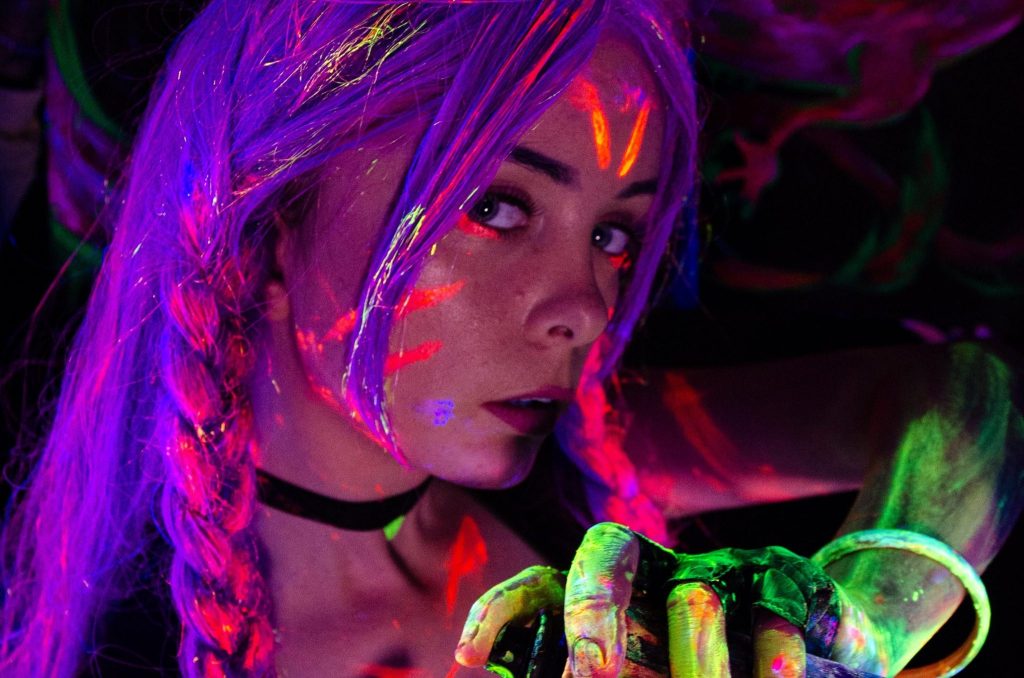 Ichizy and Iona had to design Kai’sa’s new-look neon style from scratch.

While Ichizy and Iona already knocked it out of the park with their neon-style Akali and Kai’sa, it looks like the dynamic cosplaying duo could be back with more League of Legends costumes in the near future, after teasing a True Damage set.

“We were actually considering True Damage Qiyana and Akali, maybe we could think of something interesting with that cosplay,” Ichizy said.

Whether or not the pair come back with another LoL creation, or something else like Ichizy’s recent take of World of Warcraft ultra-villain Deathwing the Destroyer, make sure you keep your eyes peeled for whatever they brew up next.