Shmee150 reveals the “most exclusive” BMW M8 Gran Coupe ever made

Tim ‘Shmee’ Burton showed off one of the “most exclusive” BMW cars ever, heading to the dealership to pick up his M8 Competition Gran Coupe First Edition worth over $120,000, one of only eight made.

Shmee150 already boasts an ultra-impressive car collection, including a Ford GT, a Mercedes AMG GTR Pro, and his beloved McLaren 675GT, but no car in his collection can match the rarity of BMW’s latest offering, with just eight of the incredible vehicle produced, and only one to be found in the United Kingdom.

For the next few weeks, the YouTuber will be cruising around the English countryside in this unbelievable motor and took viewers along as he went to pick it up, showing off all the special touches and designs that make this BMW’s most exclusive car ever. 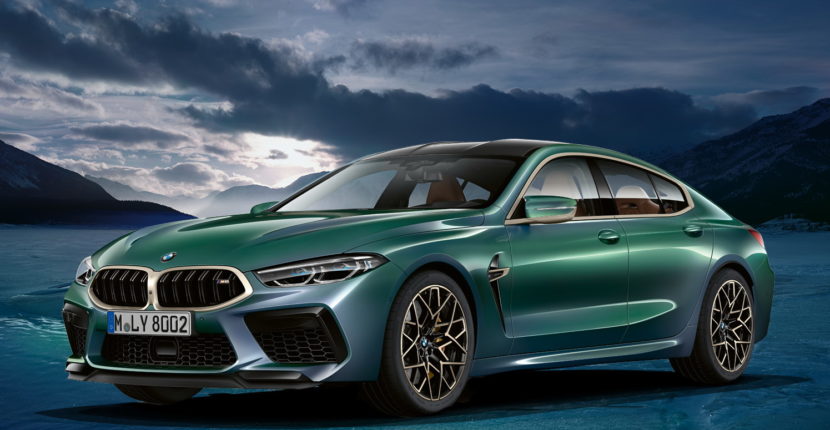 Only eight of the BMW M8 Gran Coupe First Edition have been made.

Heading into the dealership to see it, Shmee150 explained that the car’s incredible 4.4 liter, twin-power turbo V8 engine produces an eye-watering 625 brake horsepower. The size of the engine isn’t the main attraction for petrolheads with this car though, as every inch of the vehicle has been specifically designed by BMW to make it one of the rarest vehicles the Germans have ever produced.

The interior is covered in reminders that only eight of these will ever be produced, with the headrests and floor mats both embroidered with the term “1 of 8.” On the outside, the M8 logo on the back also references the name, and even the B-pillar that sits between the front and rear passenger windows is emblazoned with the slogan. Not only that, but the car itself is covered in special touches exclusive to it, with bronze-gold grills, wheels, and logos.

Even the paint job is incredibly special, with the car coming in an iridescent shade called “Aurora Diamant Green,” which sees the car change color between green and blue depending on where you’re looking at it. “That is because of the Northern Lights,” the YouTuber explained. “There are eight places around the world where you can see them, tying in very nicely with this [1 of 8] car.”

If the BMW M8 Gran Coupe First Edition wasn’t exclusive enough already, Shmee150 revealed that the vehicle he was collecting was the only one of the eight that was right-hand drive, making it the “most exclusive” version of the vehicle compared to the other seven, where the drivers all sit on the left.

The eight have been sent around the world, with Shmee150 getting his hand on the only one sent to the UK. The United States, Switzerland, Belgium, Russia, Japan, and Qatar all received one each, with the eighth confirmed to remain in Germany, where BMW are based.

On January 11, TSM announced its exclusive partnership with Cadillac, marking the very first time the esteemed automotive company has entered such a business venture with competitive gaming groups.

The initiative kicked has off with a special TSM jersey featuring the Cadillac logo — a swanky fit that the organization flexed in a tweet revealing their latest money move.

That’s not all; according to TSM’s press release, their newfound partnership will also include some very special features for their fans, such as “access to exclusive streaming events, custom video and social media content, and experiential events and activations at the brand new, state-of-the-art TSM Performance Center.”

Welcome to the #TSM family @Cadillac

It looks like there’s a lot to be excited for, and even Cadillac is jazzed to be part of the proceedings, according to GM’s Manager of Emerging Media and Partnerships, Bryan Steele.

“Cadillac is excited to enter the esports space as part of the TSM family,” Steele said of the development. “Whether on the road, or on the Rift, our organizations place an incredibly high value on innovation and craftsmanship. Given our shared values, and the pedigree of Cadillac and TSM, it was a natural fit to team up with one of the most decorated esports teams in the world.”

We wanted to start the new year off with a bang…mission accomplished. #CadillacxTSM

While TSM might be Cadillac’s first esports partnership, this isn’t the first time a luxury car brand has gotten involved with an esports group; in November 2020, Chinese car brand Haval partnered with Epic Esports Events for their EPIC League Dota 2 initiative.

Just a month prior to Haval’s own initiative, Mazda entered a deal with Hellraisers. Other auto brands similarly involved with esports include Honda with Riot Games’ LCS and Team Liquid, McLaren with DragonX, Audi with Astralis Group, and Kia with the LEC.

It seems that more and more car companies are looking to get in on the action that competitive gaming brings. Who knows — it would be really cool to see a special TSM-wrapped Cadillac someday.