Where to find helicopters, mystery box and loot areas on Blackout - Map and Info - Dexerto
Call of Duty

Where to find helicopters, mystery box and loot areas on Blackout – Map and Info

Two ingenious Reddit users have teamed up to create an interactive Blackout map that will help you find almost everything you need in the battle royale game mode.

The map currently indicates the 10 places where helicopters are likely to spawn, with creator Joel Basada stating that they hope to include other vehicles like ATVs and trucks on the map soon.

Unnamed areas with more than three buildings are also shown on the map, giving players new landing options without having to head to one of the higher traffic named locations like Nuketown Island or Construction Site.

Spawn locations for the Mystery Box are highlighted, and the designers have added a handy icon that informs players of locations that have an underground area, making sure you’ll never be surprised by an enemy appearing out of the ground again. 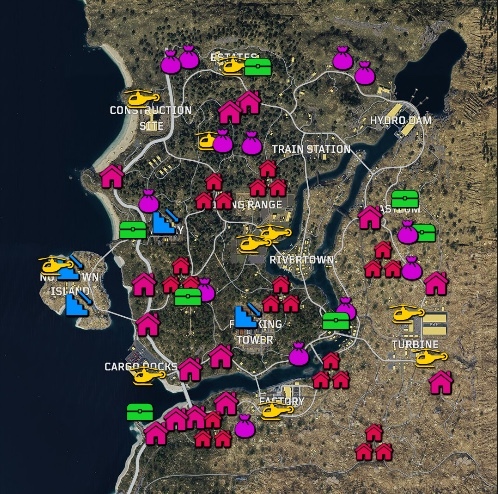 This interactive map is ideal for players who are looking for a specific spawn location, as the items that are shown on the design can be toggled on or off, meaning that users can decide what they want to see and what they aren’t interested in.

MiniMax plan to add more items to the legend of the map in the near future, citing a lack of credible sources due to the game’s recent release as the reason some things have been left off. They state that, once the information has been made available, they will add new items and spawn locations to the map as soon as possible.