When can you play CoD: Modern Warfare? Launch times on PC, PS4, Xbox One - Dexerto
Call of Duty

When can you play CoD: Modern Warfare? Launch times on PC, PS4, Xbox One

Call of Duty: Modern Warfare officially launches on October 25, but when exactly will you be able to start playing it?

Infinity Ward’s latest addition to the Call of Duty catalog has many fans incredibly excited, with a return to perhaps the most popular sub-series in the franchise, Modern Warfare, not only in name but also in spirit, with the game set to bring back a classic feel in terms of mechanics and pacing.

Whether you’re most excited to reunite with Captain Price in the new campaign, or looking to jump straight into multiplayer matches, many fans will undoubtedly be hoping to try out the game from the moment it goes live.

Exactly when Modern Warfare will be available to play depends on a number of factors, however, from how you’ve purchased the game, to what platform you’re on and where you are in the world. Here’s everything you need to know to figure out exactly when the game will be released for you.

For PC players, things are very simple, as the game will go live for everyone at the exact same time: 6 PM PDT on Thursday October 24 – technically the day before the official release on October 25, for some time zones at least.

Those on PC can pre-order the game through the Battle.net client, and immediately begin installing it in preparation for the launch. Those who pre-ordered earlier should also return to the client to install the game if they haven’t already, as the installation has only been live since October 22.

Below is the release time for the PC Global Launch in several time zones. 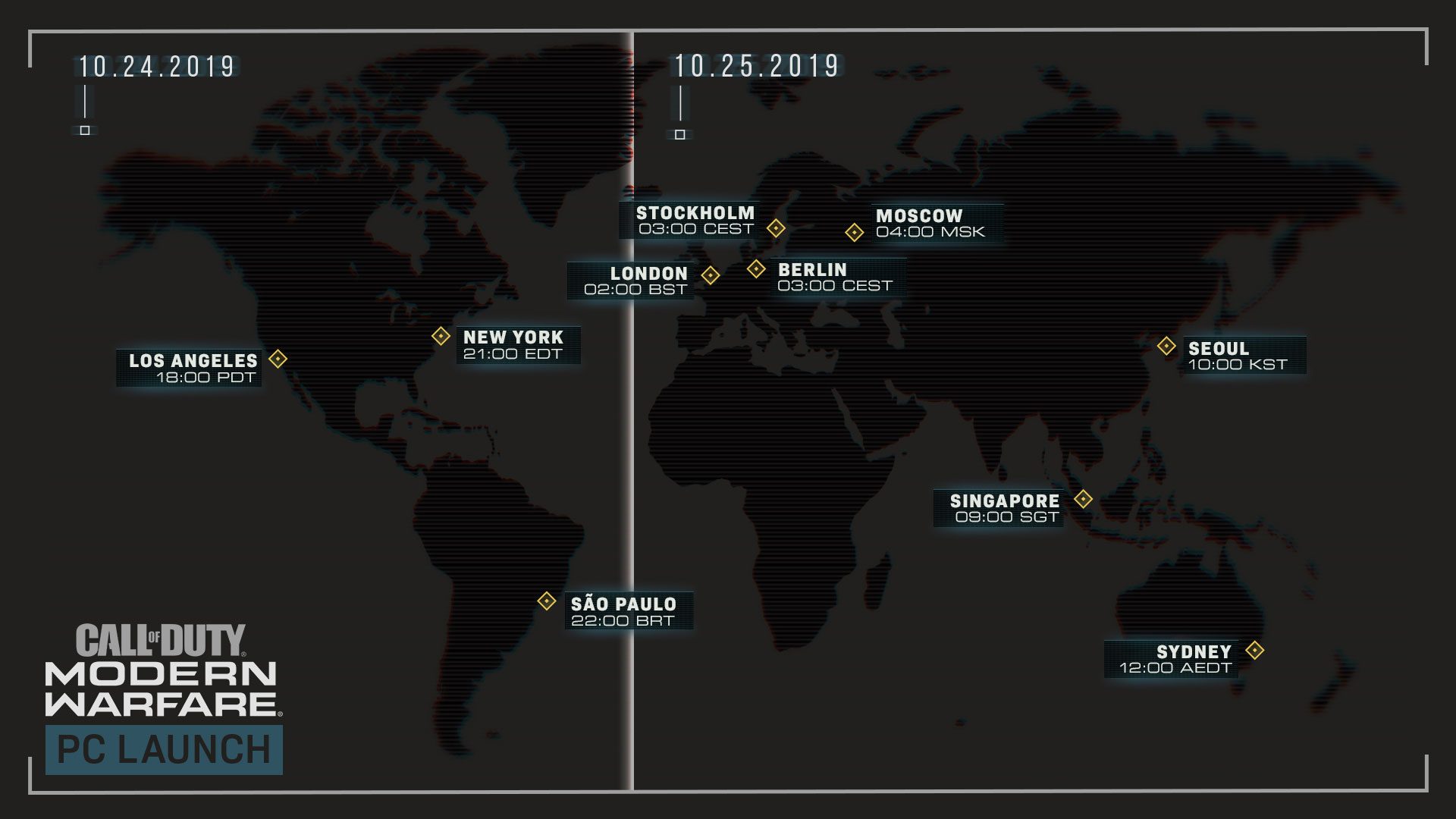 PS4 and Xbox One Launch

Things are a little bit more complicated for console players. For a start, if you manage to get your hands on a physical copy, you can actually start playing immediately.

For those who have bought the game digitally, however, there will be different release times depending on where you are. Most of the launches are taking place at midnight local time, but for players in North America the game will be available at the same time as the Global PC Launch, from 6 PM PDT.

Like the PC version, digital purchases on console can be pre-loaded, so be sure to set the installation going ahead of time so you’re not waiting once the game actually releases.

For PS4 players, the launch will also feature the Survival mode, a part of Spec Ops which is exclusive to the platform for a whole year. Players on PC and Xbox One will have to wait until October 2020 – when the next Call of Duty instalment will presumably be launching – if the want to experience the mode, something many fans have unsurprisingly expressed frustration over.