Call of Duty developers Treyarch have provided the first glimpse of the classic Nuketown Multiplayer map that will feature in the upcoming Black Ops 4 title.

The very first teaser image of Nuketown was tweeted out by Treyarch on October 9, along with a caption written in Russian.

The caption, when translated to English, reads: “Visit us again… For the first time here #Nuketown,” which suggests that the map will be located in Russia.

The snow displayed in the image, coupled with the prospect of it being in Russia, suggests that the map will take place in a snowy setting, which would be a first for Nuketown in the Black Ops series. 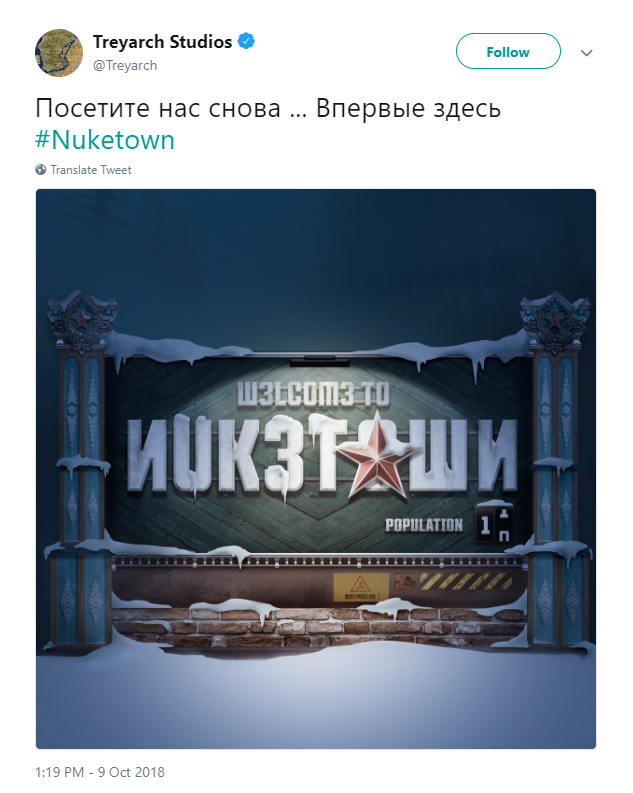 Nuketown is one of the 15 confirmed Multiplayer maps for Black Ops 4, but will not be available immediately when the game launches.

The map is scheduled to release sometime in November for all players, and will be available on the Playstation 4 seven days early, as part of Sony’s exclusivity deal with Activision.

One of the most iconic Multiplayer maps in Call of Duty, Nuketown has featured in every title of the Black Ops sub-franchise. It’s small-scale and symmetrical design has made the map notorious for focusing on extremely close-quarters combat.

Nuketown also features in the new Blackout battle royale mode of Black Ops 4 in the form of Nuketown Island, a point-of-interest on the map where players can either land at or venture to.