Modern Warfare launched with 18 operators, but a leak has revealed plans for at least 13 more in the future.

The Call of Duty franchise took some risks, originally with the Black Ops series, by introducing Specialists which were skins that had special abilities, and caused no end of controversy in the community.

With this latest installment, the Specialists are no more, instead, they are simply called operators, which are purely cosmetic, with no special abilities, so there’s nothing to worry about on that end.

However, you’ll still want to pay attention to who you pick so you won’t run around looking like everyone else on the battlefield.

If you’re not satisfied with the current roster of operators, then you’re in luck, as a new leak has revealed a whopping 13 more are on the way in the future.

Modern Warfare has several new operators on the way according to a new leak.

According to Reddit user Senescallo, these new operators will be split between the two factions almost evenly with six coming to the Allegiance and the other seven going to the Coalition.

It’s also possible that there will be more coming in the future if this is true, since it’d be strange the devs leave it on an odd number. 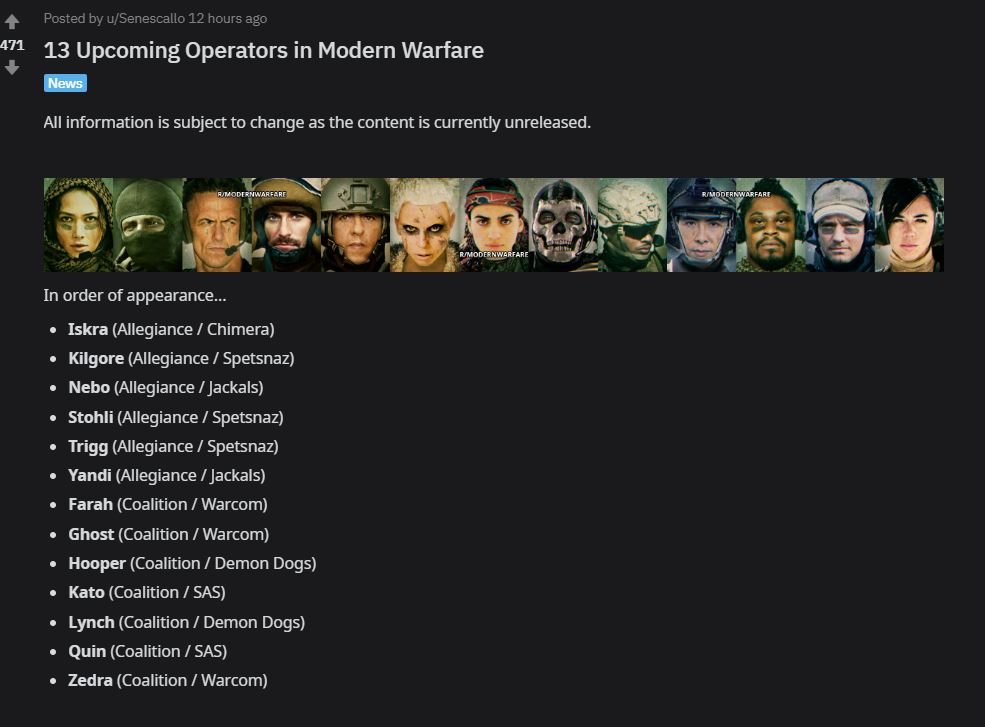 A look at the upcoming operators.

What’s even more interesting is that the third operator from the end looks distinctly like former Seattle Seahawks runningback Marshawn Lynch, which would be pretty cool to see given his fondness for the series.

One thing that was not mentioned is a price tag. All of the new content that has arrived in Modern Warfare so far has been free of charge, but that doesn’t mean it’ll remain that way going forward. We’ll keep you posted on any news on that front going forward.

It’s important to note this remains just a leak for the time being so don’t take it as an absolute fact until we get official confirmation from Infinity Ward.

Modern Warfare is less than a month old still so it’s clear there’s a long future in front of it in terms of new content and it has already received new maps, so getting some more operators certainly seems like a possibility.