Matthew ‘FormaL’ Piper and Seth ‘Scump’ Abner have brought T2P back in full force for the first franchised year of the Call of Duty League — a dominant partnership showcased in this Modern Warfare highlight.

FormaL and Scump — is there a more iconic Call of Duty duo? Perhaps the most decorated pair in Call of Duty’s history, their partnership flourished as they both bagged their first world championship ring together back in 2017.

However, after a rocky season on WWII, ‘T2P’ (which stands for ‘time to pound’) split in May 2018 — marking the end of OpTic Gaming’s dynasty roster. Nonetheless, after squashing their beef with one another, the pair are back in action on Modern Warfare. 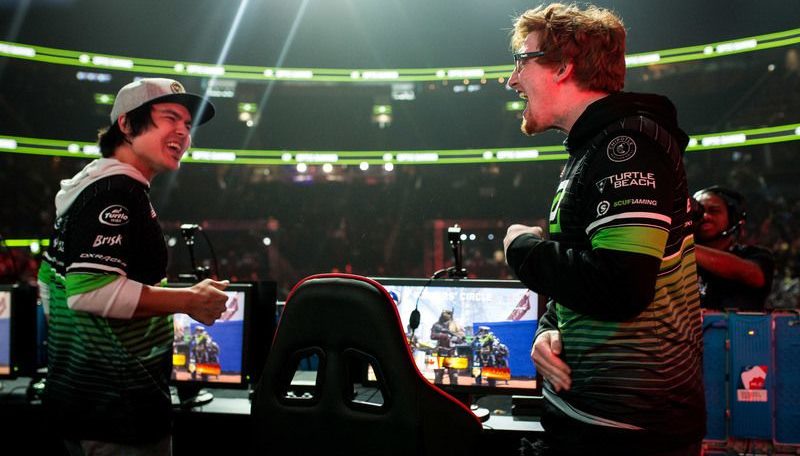 T2P were pivotal to OpTic’s successes for four years.

Now forming 2/5 of the Chicago Huntsmen, both FormaL and Scump have been reigniting their form of old in recent scrims, as T2P has run riot over teams far and wide.

Although the pair clearly boast unrivaled abilities on the sticks, it’s perhaps their communication that sets them worlds apart from other duos in the franchise.

While playing in a 5v5 Gamebattles variant match on Arklov Peak, Scump gave a key insight into why the pair thrive under pressure.

Having just been eliminated near mid-stairs, FormaL called out his foe and timed it to literal perfection. “Listen, one is going mid-stairs in about five seconds, Seth,” Piper briefed. “Watch your mid-stairs, he’ll come up in like three seconds!”

Right on cue, the enemy appeared exactly where he was predicted, with uncanny timing.

Not only is FormaL’s ability to anticipate his enemy’s movement and timing so impressive, but Scump’s undoubted trust in the call is why their communication is second to none. It’s also part of why T2P has now become a household name in the Call of Duty community.

Of course, Scump landed the headshot on his opponent, as he locked on with his razor-sharp M4A1 aim — reminiscent of his knack with an ACR back on MW3.

With the start of Modern Warfare’s competitive season around the corner, players are starting to heat-up and hone in their form.

T2P and co. will be kick-starting their competitive campaign on January 24 at the season opener in Minnesota, where they will lock horns with none other than OpTic Gaming LA.