Evil Geniuses claimed gold at the Call of Duty World League Championship on August 19, defeating Team Kaliber in the grand final, and it didn’t take the players long to react to their incredible achievement.

The 2014 world champion had not won an event since the MLG Columbus Open in November of 2014 but proved many doubters wrong with a solid performance throughout the tournament. 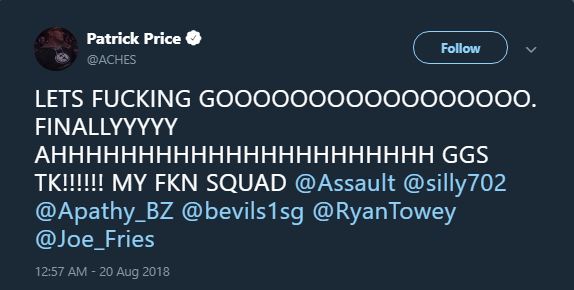 With the end of ACHES’ drought dominating many storylines, the fact that Assault had never won an event in his life went somewhat under the radar.

Clearly not content with winning his first event and world championship title in the same weekend, the 22-year-old also picked up the tournament MVP crown thanks to his dominant performances throughout the competition.

Assault said “WORDS DON’T EVEN EXPLAIN THIS FEELING” before reminding fans that EG had been just one map away from being eliminated in the group stage!

Apathy, who also picked up his second world championship title with the win, echoed Assault’s sentiments about words not describing the happiness that he was feeling and talked about how proud he was of the team for bouncing back after not making it to the CWL Pro League Stage 2 Playoffs in July.

This was the veteran player’s third world championship final in a row after winning the title in 2016 and being a runner-up in 2017. He went on to reflect on the CoD WWII season, saying that he had never given up despite it feeling like the worst year of his career at times. 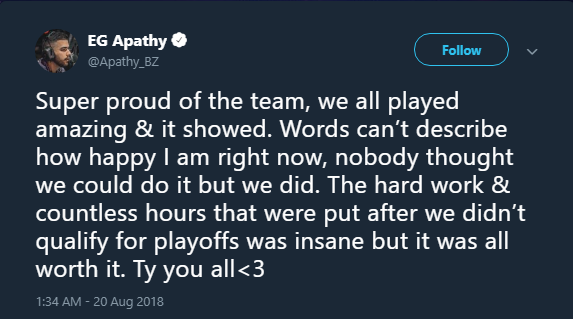 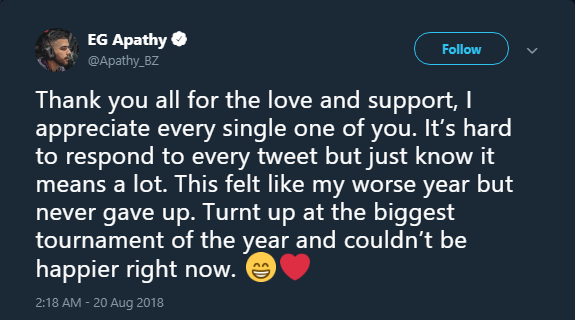 SiLLy’s 2018 was a similarly difficult one at times, especially when he was dropped from the eUnited roster in April.

SiLLy explained that “being an underdog really game me the fire to play my best individually” and stated that he was “glad to win the big one”.

There is one more man that deserves a great deal of credit for EG’s incredible performance – Embry ‘Bevils’ Bevil, who decided to step away from his playing career and pursue a new role as the coach of Evil Geniuses in April.

The 21-year-old has been through every high and low with the team in recent months and was surely a massive factor in Search and Destroy improvements seen at CoD Champs.

Bevils said “the boys did it” before talking about the adversity they had faced earlier in the tournament and saying that he “couldn’t be more proud”.

Evil Geniuses has gone from a team that seemed destined to split up at the end of the Call of Duty: WWII season to one that won the world championship and did so in convincing fashion.

With Black Ops 4 due to be released on October 12, the players are likely to take some time away from their PlayStation 4’s before returning to the grind and beginning their campaign to retain their title in 2019.