The drawn out saga of the mysterious CoDBurner continues, and this time he’s made public claims about eUnited’s Call of Duty roster.

According to the infamous insider, multiple eUnited players want to leave the org because of the disparity in their desired wages and what they’re actually getting paid.

“Players want off eUnited because they can’t pay enough and everyone wants $10k now,” the CoDBurner claims. “Splyce is making big offers and ‘Rich Guy’ is offering $20k to everyone.”

The CoDBurner went on to specifically name, what he alleges, is the current status for all of eUnited’s players regarding this wage situation. 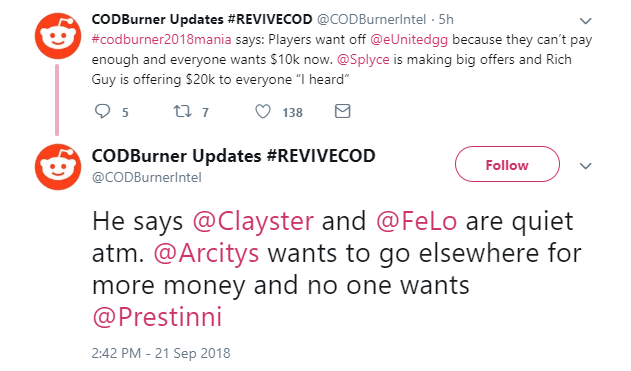 “Clayster and FeLo are quiet at the moment,” the CoDBurner said. “Arcitys wants to go elsewhere for more money and no one wants Prestinni.”

EUnited’s Tyler ‘FeLo’ Johnson vehemently dispute the claims, brushing them off as speculative nonsense. In fact, he even went on to hint that the team had already picked out who the new fifth member of their roster was going to be.

“Does this guy just sit in a dark room and write down predictions and hope they come to fruition?” he tweeted. “I’m playing with our fifth right now, stop tweeting me sheesh.”

Preston ‘Prestinni’ Sanderson had a much more emotional reaction to the CoDBurner’s claims, as he made clear in a response to eUnited coach ‘Saintt.’

“I’m ready to throw hands on sight when I found out who this guy is, Brian,” he wrote on Twitter. “I’m fed up. This guy is pissing me off at this point.” 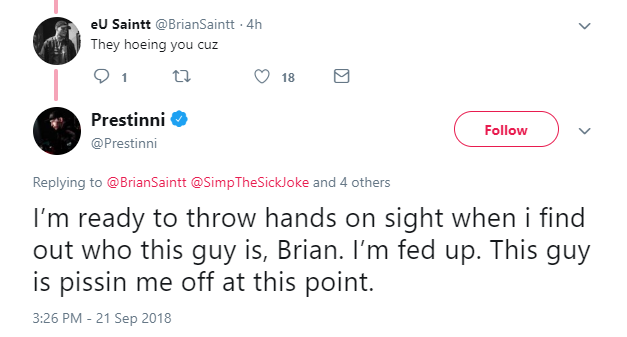 Whether or not the CoDBurner’s allegations are true remains to be seen, especially if the eUnited players are being this insistent in their denial.

However, eUnited was not one of the orgs people predicted would make any wholesale or major changes to their CoD roster going into the Black Ops 4 season.