The first day of bracket play at this year’s Call of Duty World Championships brought an action-packed day — with elimination looming some cracked under pressure, while others showed their worth.

CWL Champs 2019 has been nothing short of a utopia for spectators, from dominant displays to surprising early exits, this season’s curtain caller has surpassed fan expectations.

Bracket play traditionally brings the elimination of four teams, as the spoils of war continue to be distributed amongst teams. While things were heating up on day three, some made more of an impact than others with familiar names making the top 10 for ‘highest damage per minute’ (DPM). 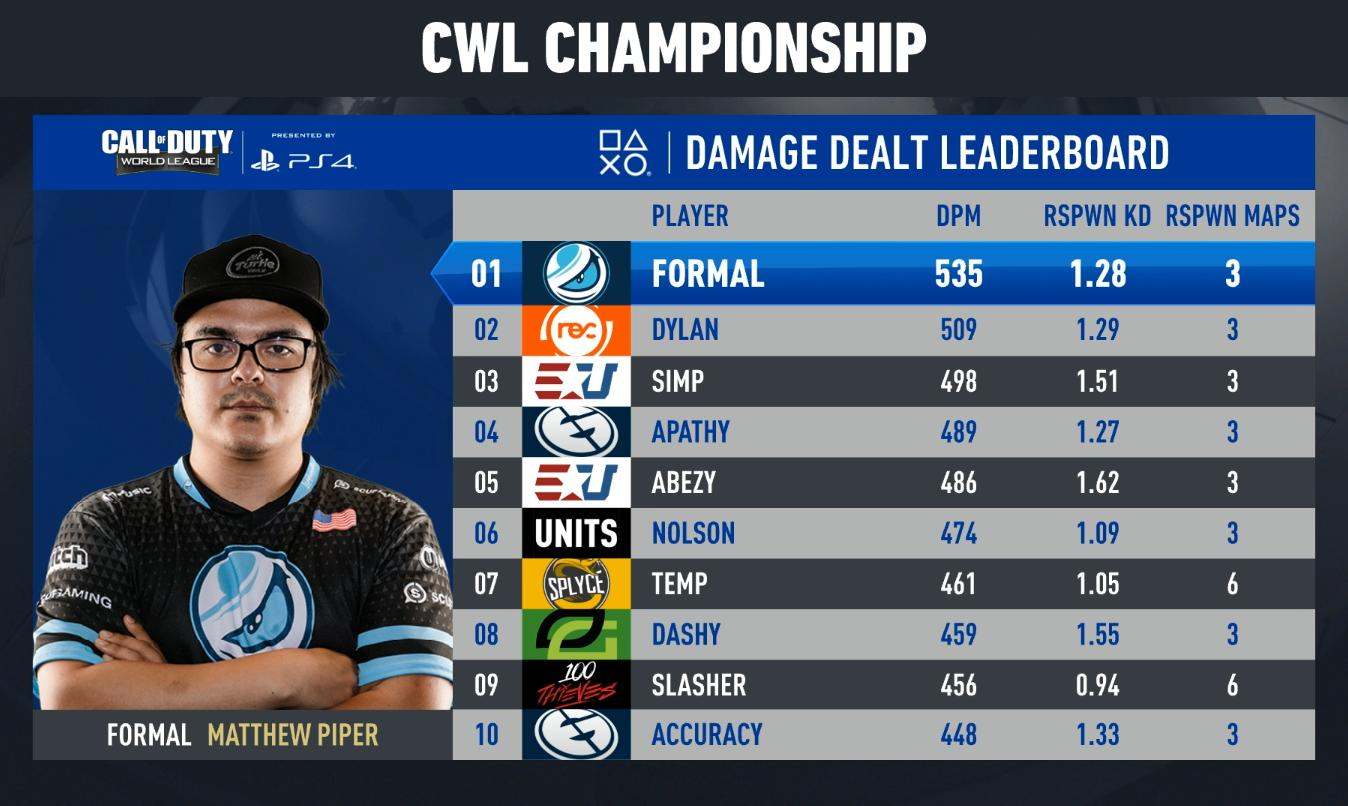 FormaL leads the way, with Dylan hot on his heels.
[ad name=”article2″]

Luminosity Gaming’s Matthew ‘FormaL’ Piper is having one of his best tournaments to-date, as he appears on the list for the third successive day. Scraping their way through pool play, FormaL and co. rebounded from their poor form to overturn 100 Thieves in a commanding 3-1 win.

With some discerning plays during the Control and both Hardpoints, Piper seemed to reach new levels as he totaled 85 kills during the series that saw Luminosity progress to the second round of the Winners’ Bracket.

The dominance displayed throughout the series is even more impressive, given that 100 Thieves came out of pool play 3-0 and were previously favored to take the lion’s share of $2 million — proving that FormaL is not letting this second chance squander away easily.

Perhaps Josiah ‘Slacked’ Berry’s ‘Slacked Slam’ will go down as one of the most clutch plays of the tournament, as it delivered the final crushing blow that saw 100 Thieves put into the Loser’s Bracket.

eUnited are heating up

After their success at CWL Finals, eUnited came into CWL Champs as the top seed and demonstrated why by topping their group in pool play with relative ease, further continuing their form from pool play into the knockout stages.

Placed against top amateur outfit, Team WaR, Chris ‘Simp’ Lehr and Tyle ‘aBeZy’ Pharris combined to net 498 and 468 DPM, respectively — seeing an eUnited player making the list for the first time during this tournament, and proving that eUnited always heat-up when it matters.

.@SimpXO is putting on a show on Seaside HP!

Notably, Dylan ‘Dylan’ Henderson sits just behind the top spot on the list for the second time, as his dominant display yielded 87 kills from a total of 155 engagements for Team Reciprocity, sending FaZe Clan to the Loser’s Bracket.

Sitting between the eUnited duo, two-time world champ, Bryan ‘Apathy’ Zhelyazkov showed up in style for Evil Geniuses as they made light work of Splyce, taking them down 3-1.

Both eUnited and EG are set to meet in the second round of Winners’ bracket, while FormaL looks to continue his frenzy on the other side of the bracket versus Dylan and co., in a clash of the titans that should be one for the history books.

A significant shift in player contributions is likely given the big day of Call of Duty ahead for all teams involved.