Popular Call of Duty content creator and Twitch streamer, Xposed, has been banned on Twitch after accidentally revealing private information of his viewers during a Christmas giveaway broadcast.

With over 130,000 followers to his name, Xposed is one of the bigger Call of Duty content creators on Twitch, however the streamer was just met with a temporary ban after violating the Community Guidelines.

In the midst of a Christmas giveaway on December 26, the streamer accidentally revealed the private information of a number of viewers, directly resulting in a month-long ban from Twitch.

“I’m officially banned from Twitch,” the streamer shared just days later on December 29  alongside a detailed explanation of the events that led to his temporary removal from the platform.

Outlining the situation that resulted in a 30-day suspension, Xposed described how he was hosting a Christmas giveaway on Twitch and that in order to promote a fair and transparent contest, he would utilize the giveaway service known as ‘Gleam.’

“I wanted to do the giveaway live so people didn’t have any suspicion on who won the giveaway and didn’t think it was fake,” he explained. “I didn’t realize that when the winners are drawn it shows Hometowns, First and Last Names and Emails.”

Expressing regret for the oversight, Xposed stated that he “immediately” realized he was in the wrong and had “messed up” in accidentally sharing vital information that so many viewers had entrusted to the giveaway site.

“I quickly deleted the Vods and Clips but it was too late. Accident or not, I’m at fault for this and should’ve tested the giveaway website before using it. I want to apologize to Twitch and my viewers for what’s happened.”

Serving as the only source of income for the content creator, Xposed will be unable to provide for his family over the next 30 days and with a child on the way in the near future, the streamer has emphasized just how damaging the lengthy ban can be.

“All my subscriptions currently will be canceled, people may forget about me, people may find new streams to watch because I’m no longer online every day. With all this going on I’m going to be super stressed and it will be extremely difficult for myself and my family.” 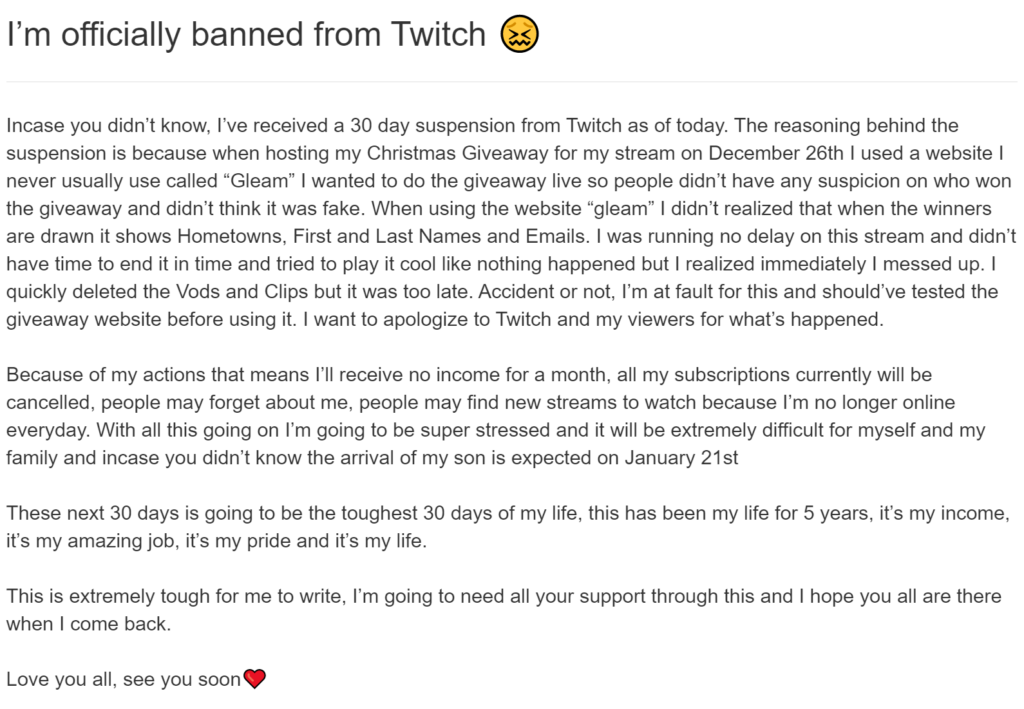 Xposed elaborated on the punishment from Twitch and explained how the next 30 days will be the “toughest” of his life.

A number of fellow content creators and Call of Duty professionals chimed in and showed their support for Xposed, even campaigning for a reduced suspension.

Dillon ‘Attach’ Price of the New York Subliners Call of Duty franchise reassured that “no one is forgetting about [Xposed].”

“Upload some YouTube videos in the meantime,” the CDL star added. “People would love to support you anyway they can.”

Similarly, OpTic Gaming content creator, ‘Rallied,’ expressed concern, stating that the situation is “actually awful. Hope [the ban] gets shortened for you. This still is our lives so I could only imagine how you feel.”

That is so unfortunate, I’m sorry brotha. No one is forgetting about you and upload some YouTube videos in the mean time. People would love to support you anyway they can

Damn, man. That’s actually awful. Hope it gets shortened for you. This still is our lives so I could only imagine how you feel. On the bright side it’s only temporary so stay strong, brother.

With over 25,000 followers on Twitter and just under 10,000 on YouTube, Xposed could continue to push content out on other platforms for the duration of the Twitch ban as others have suggested.

However, his primary source of income has been made redundant for the following 30 days despite similar oversights resulting in lesser punishments. Accepting fault for the oversight during the Christmas giveaway, it’s likely that Xposed will be extra cautious upon his eventual return to the platform.