A new, highly dubious, Modern Warfare 4 leak is circulating social media and contains major information for the next title.

The Call of Duty community is already starting to piece together the next edition of the series. Although the Modern Warfare 4 title is yet to be confirmed, that has not stopped rumors from surfacing with details.

According to a new leak, Call of Duty 2019 will be Modern Warfare 4 and the multiplayer portion will feature Specialists. In addition, the Battle Royale mode that first appeared in Black Ops 4 will return with a MW version.

The source of the leak is an image being spread across social media. In addition to the specialists information, the image contains details about the campaign, zombies and even the multiplayer announcer. 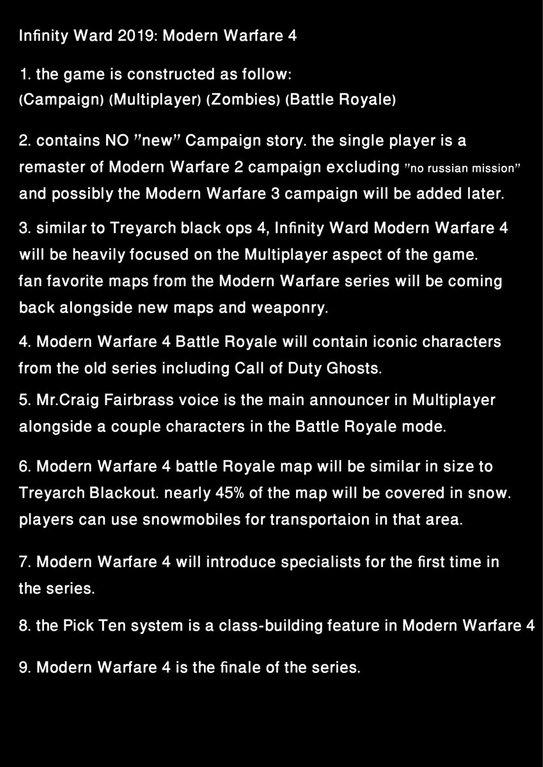 Unlike most rumors or leaks that have a clear origin, even if that origin is an anonymous account, this leak seemingly appeared out of thin air before being spread around by major Call of Duty channels, like ChaosXsilencer – with a heavy disclaimer.

this is the leaked info that is floating around about #MW4, what are your thoughts?

ATTENTION none of this is confirmed in any way by anyone… all of this could VERY likely be fabricated and made up… but… if it was true, whatcha think? pic.twitter.com/2NL5MPXWbU

Due to the nature of the leak and the information that ranges from plausible, educated guess to ridiculous speculation, these new rumors should be taken with a very, very large grain of salt.

Rumors started that Infinite Warfare 2 was not going to happen once Infinity Ward’s Community Manager tweeted images of skulls – implying something about Ghosts or Modern Warfare.

When the Ghosts 2 rumor was emphatically denied, focus switched to Modern Warfare 4.

Activision and Treyarch have successfully pulled off a “greatest hits” edition of the Black Ops series with Black Ops 4, leading some to guess a Modern Warfare version is on the way from Infinity Ward.