Following the four matches that took place on April 10, the eight competing teams at CDL Dallas came into day two knowing that four of them would not make it out standing.

As expected, the two tournament favorites – Dallas Empire and Chicago Huntsmen – both made it to the playoff bracket with relative ease, winning Group A and B respectively. Minnesota ROKKR and Florida Mutineers, the other two teams to survive the group stage, both had to clutch up in the Losers Bracket in order to secure their semifinal spots. Only four of the eight participating teams made it to the Dallas Empire Home Series playoff bracket.

After the Huntsmen’s dominant 3-0 sweep of Minnesota ROKKR on day one, most expected them to go through against Paris Legion, who had to survive a game five in their win against Seattle Surge.

Things started ominously for Chicago, however, after Paris took a 1-0 lead with a remarkable 250-230 win on Gun Runner Hardpoint.

However, thanks to a spectacular ace from Envoy in the subsequent Search & Destroy, the boys in green not only came back to tie the series but were able to ride their momentum to a 3-1 series victory.

Tournament hosts Dallas Empire’s 3-1 dismantling of Los Angeles Guerrillas on day one led them to a Group A final against Toronto Ultra, who despite their struggles coming in, found themselves in the second round following their 3-2 win over Florida Mutineers.

The match was meant to be an easy one for Dallas, and it started that way, as they took a swift 2-0 lead following a 6-2 win on Gun Runner SnD.

Ultra tried their best to flip the script by forcing a game five after two round wins of their own, but the Empire’s talent advantage finally showed out in the end as they clutched up to win a series that was a lot closer than it should have been.

With two of the four semifinal spots filled, the attention turned to the losers bracket, starting with a Group B match between ROKKR and Surge that turned into an instant classic.

After going down 0-2, Seattle somehow managed to pull out a tie against Minnesota in the map three Domination, the first-ever draw in Call of Duty League history.

The teams replayed the map, which Surge won, but the intensity didn’t stop there: the subsequent Hardpoint on Hackney Yard featured an equally breathtaking ending, as the boys in blue stole a 250-249 victory. With everything coming down to the fifth game, ROKKR put their foot down and stamped out a 6-2 win to seal the series victory.

WE HAVE A DRAW!!!@SeattleSurge and @ROKKR tie the Game 3 Domination, so they will replay the map.

With both of these teams struggling coming into day two, something had to give, and it was ultimately the Mutineers who took control of the match and won 3-1.

Things started tight, with each team winning a game apiece, but Florida’s victory St. Petrograd Domination gave them the momentum to finish the series on hackney Yard Hardpoint.

With the loss, Guerrillas got eliminated in the first round for the second straight CDL event, following their own Home Series a month earlier. They now sit dead last in the league with a 1-7 record and only 10 points.

The final match of Group B took place between two teams that both came in with a top-five position in the CDL standings, but it was the ROKKR who stepped up to secure the third semifinal spot.

It was a back-and-forth affair to start, with both teams winning one map apiece before Minnesota pulled away with two convincing victories – 176-112 on Gun Runner Domination and 250-167 on St. Petrograd Hardpoint.

This marks the third consecutive tournament that ROKKR will be guaranteed a top-four finish, having placed fourth at CDL Atlanta and second in Los Angeles. They’ve managed to make it out of group play in every tournament they’ve played so far.

As for Paris, it was another disappointing early exit, as they’ve now failed to make it to the playoff bracket in back-to-back events after their surprisingly hot start to the season.

Minnesota @ROKKR takes the series lead with that 176-112 Domination win!

The contest for the fourth and final semifinal spot turned out to be a relatively one-sided matchup, as Mutineers took the 3-1 victory against Ultra to secure their place in the playoff bracket.

After falling behind 0-2, Toronto managed to temporarily survive elimination with a win in the game three Domination, but a convincing 250-159 Florida win on the subsequent Hardpoint sealed the deal.

It was yet another group play exit for the Ultra, who have failed to make it to the semifinals in all three knockout tournaments they’ve played so far. It’s been a tough season for the northerners, who are know tied with Guerrillas for last place with only 10 points and a 1-7 record.

Looking ahead to day three

The Dallas Empire Home Series playoff bracket is set following the day two matches, as Huntsmen will take on Mutineers followed by the hosts facing ROKKR in the semifinals.

Both Chicago and Dallas will be favorites heading into their respective matches, and most fans will hope that things go according to the script so that the two heavyweights face off against each other in the Grand Final.

Here is the schedule and bracket heading into the third and final day of action: 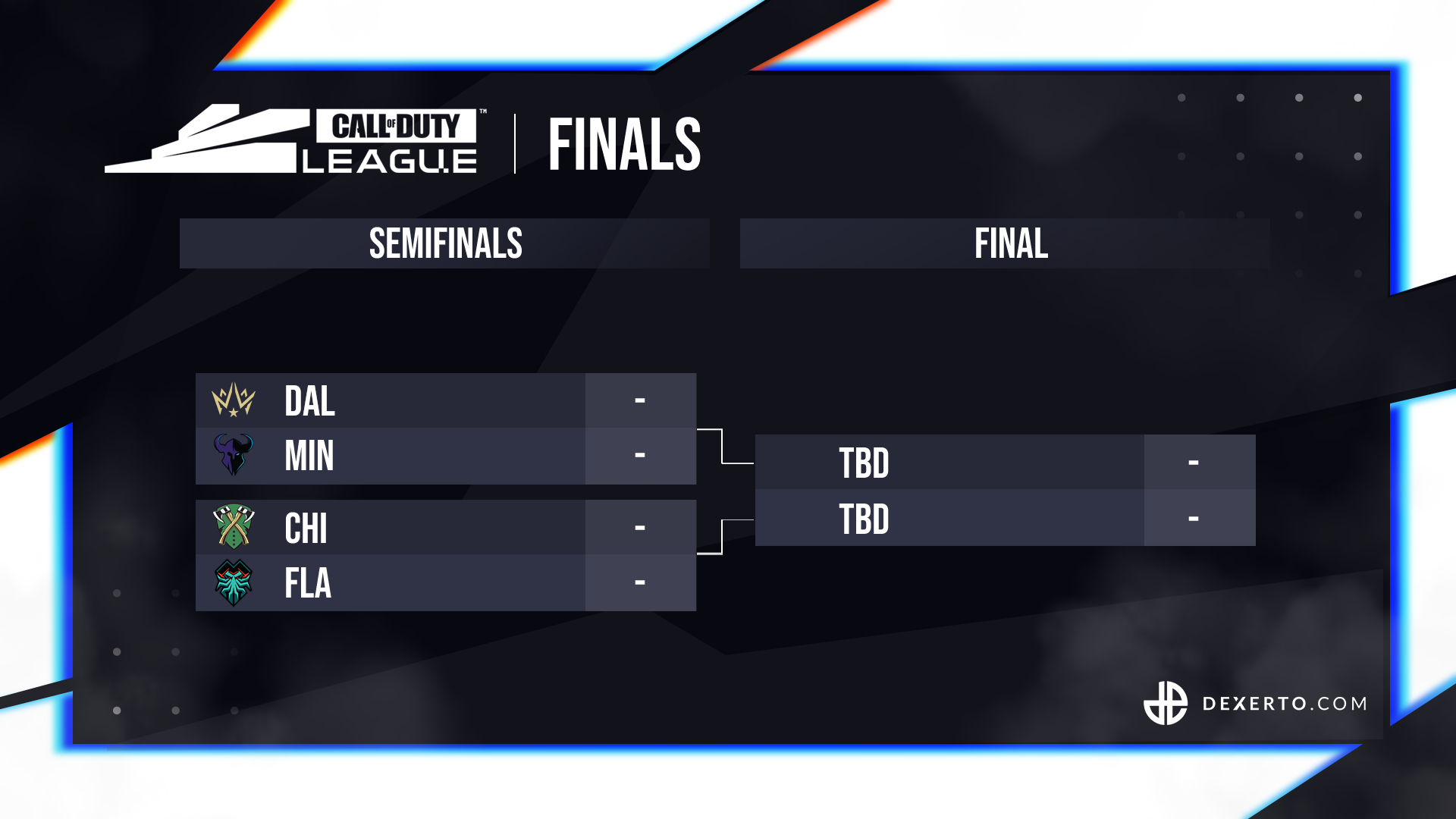 Remember, you can watch these matches live and keep up with all of the Call of Duty action via our CDL Dallas hub, which includes streams, updated scores, brackets, and more.