With much of the Call of Duty community awaiting news on League Play, Treyarch have finally given players a detailed breakdown of what’s in store.

While Treyarch still has yet to provide a specific date for the launch of League Play in Black Ops 4, they have now stated that it will be coming to PlayStation 4 in mid-February.

Treyarch says that League Play in Black Ops 4 will follow a similar pattern to that of Black Ops 2, which should certainly be great news for competitive fans.

While Treyarch did state that they wanted to look at Black Ops 2 as the basis for what they would do for League Play in Black Ops 4, they acknowledged some of the problems that were featured in that iteration of the popular mode.

One of the biggest ones centered around the length of seasons, with many players feeling they were too long and featured ladder groupings that were too large.

As such, Treyarch will be shortening the seasons for League Play in Black Ops 4 along with revamping the ladder system to make things a bit more rewarding. 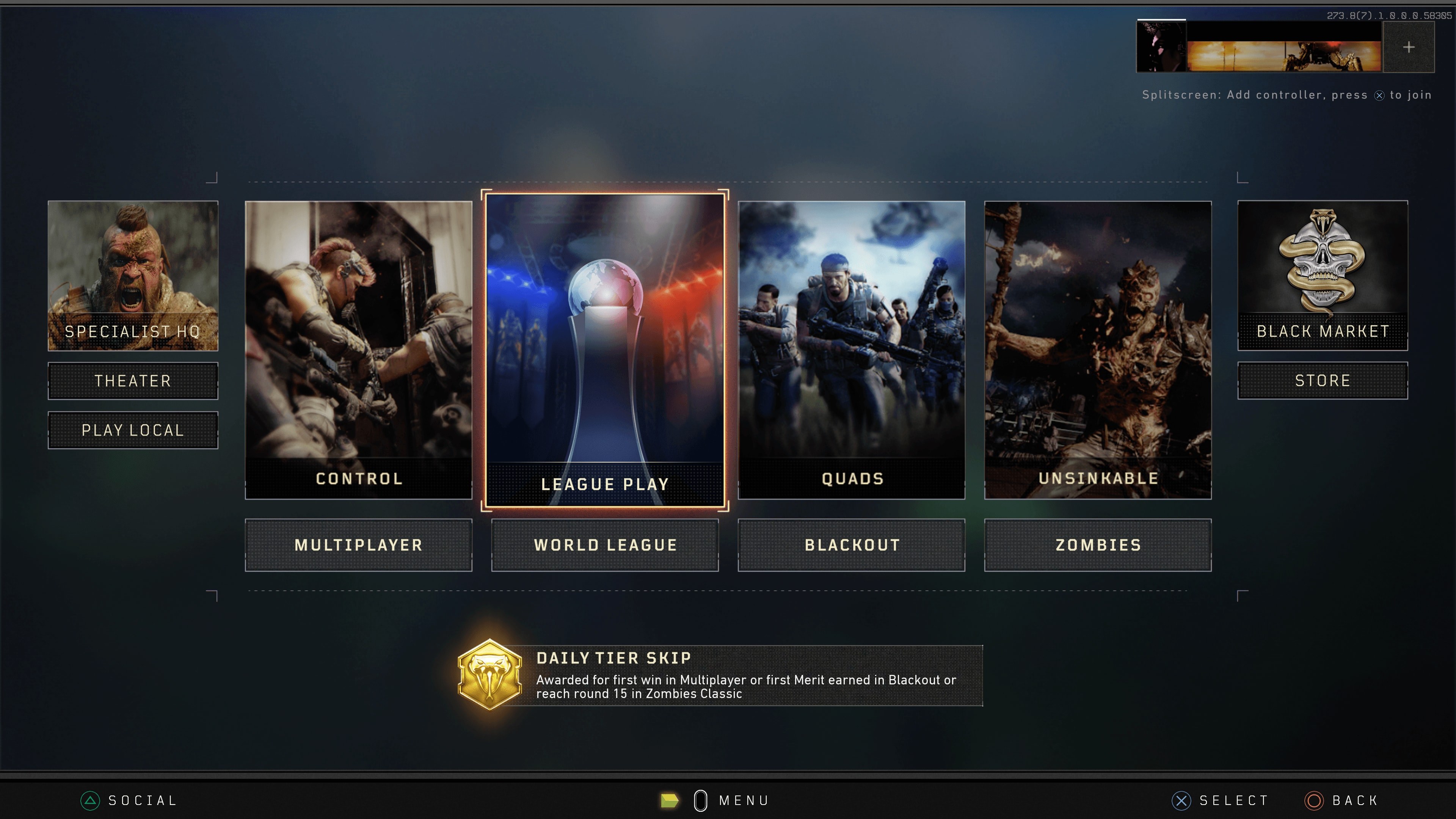 League Play is set to arrive at long last in “mid-February.”

Following Treyarch’s initial breakdown of League Play in Black Ops 4, one of the biggest complaints was that it would only be available for three days.

Treyarch heard the outcry and have also announced that League Play will include events throughout the entire week.

For those looking to get a taste of competitive action ahead of the official launch of League Play, a “Pro Series Moshpit” playlist will be added that features the full CWL ruleset, including the updates also announced on January 29.

You can read the full announcement on League Play below:

After wrapping up the recent CWL Pro League Qualifiers in Columbus and taking in additional Call of Duty World League feedback regarding the upcoming launch of League Play, we’re updating our game plan to make the Black Ops 4 competitive experience even better. Our goal has always been to help make the CWL as exciting as possible, and we’re adapting some core gameplay mechanics to set the stage for an incredible 2019 season for players and fans alike.

In the following sections, we’ll get into the details on our plans with the CWL and World League Hub across the board for Black Ops 4, and what to expect as League Play and additional competitive features roll out.

First, we’ve huddled with the Call of Duty World League team as well as pro players and some members of team management to evolve the CWL ruleset. Our goal is to more closely match how the pros play, while embracing the diverse toolset of Black Ops 4 that allows for those big, exciting plays that make the game so damn fun to watch. We believe these carefully-considered updates will improve the future of competitive play for the pros on stage, and more widely, for our ranked players at home.

This updated CWL ruleset will go live in Black Ops 4 later this week, and includes the following new restrictions (with all previous restrictions listed here still in place, including the full restriction of Nomad):

Additionally, Zero’s Ice Pick and EMP Disruptor, and any new Specialist content that we release in the future, will remain out of competitive play by default until or unless deemed viable through the CWL organization.

With these new restrictions in place, players who choose Prophet, Firebreak, or Seraph will still be able to equip the Trophy System, Combat Axe, Frag, Molotov, or Concussion in their Equipment slot. These changes are a direct result of feedback and coordination with the competitive community, and we can’t wait to see how it all plays out in ranked play and at future CWL 2019 events.

The Evolution of League Play

Aside from the new CWL ruleset, we’re also making fundamental changes to how we’re approaching League Play and the World League Hub based on feedback from the competitive community – particularly the ranked fans at home who gave us detailed responses on what they enjoyed about previous iterations of League Play, and how Black Ops 4’s competitive offering could change for the better.

We know many of our competitive players loved League Play in Black Ops 2, and some still consider it to be the gold standard. We’re big fans, too. However, we’re also aware of the problems that were inherent in the design of our very first in-game competitive feature set that launched back in 2012:

With every new design of a system, we start by identifying the problems to solve from previous iterations, and the League Play system in Black Ops 4 has been designed to avoid these shortcomings and accomplish some new key goals:

We’re also introducing a new progressive rank system that persists across all individual League Play and other World League Hub events. Here’s how it will work:

Against this backdrop, we want our fans to know that we’ve heard them loud and clear on the desire to have ranked play available all the time, as opposed to having 3-4 day events with downtime in between. This is a good time to mention that the intervals between League Play events were designed to be filled with a different type of ranked play called World League Gauntlets, a feature which will not be ready to launch alongside the World League Hub, hence the reason for the initial announcement of a “Scrims” period of downtime during these breaks to fill the gaps.

Due to popular demand, League Play at launch will now include events that span across the full week, removing Scrimsfrom the ranked schedule until we’re ready to go live with World League Gauntlets, which will also allow you to contribute to rank by completing a longer series of wins before striking out with three losses.

You’ll also earn Multiplayer XP and Black Market Tier progression as you play ranked matches, so there’s never a moment lost as you compete for rank. Support for Teams and Clans will also follow later in the 2019 season as feature additions to the World League Hub.

Because we’re investing the additional time and development into making Black Ops 4 competitive play as robust as possible, the World League Hub will serve as the fourth pillar of Black Ops 4’s core gameplay offerings going forward. This means you’ll see a new main menu when you boot up the game, with “World League” as its own showcased mode between Multiplayer and Blackout when it launches.

We’re also moving CWL Custom Games over from Multiplayer to the World League Hub, so that players won’t need to go into Multiplayer Custom Games and change settings to play with the new official ruleset. This means competitive games will be faster and easier to play, and it consolidates all Pro Series competitive gameplay into one location. This feature will go live alongside the launch of World League Hub.

Given these changes to the League Play structure, we’re taking a few extra weeks to implement and test the new changes, and the launch of the World League Hub and League Play is now slated for our next major game update planned for mid-February, first on PS4. Because this is a part of a larger game update with a lot of moving pieces between developer, publisher, and first-party platforms, the specific day of the release is still being finalized with all parties in the release process and will be announced as we get closer to it. League Play will be an even better experience for ranked play and pro players with the new competitive ruleset, the addition of CWL Custom Games, and ranked play progression for every day of the week.

To get everyone prepped for League Play until then, we’re planning to launch a limited-time Pro Series Moshpit public match playlist later this week, where all players use the updated competitive ruleset. Restrictions on Specialists, maps, modes, weapons, Equipment, Attachments, Perks, Scorestreaks, Wildcards, and Gear will reflect the rules governing League Play, so this is the perfect time to set up your favorite new competitive classes before our first League Play event kicks off.

Because this is a playlist for public matches and not a part of the World League Hub, it will use public matchmaking rules: it will be unranked, will not support skill-based matchmaking, and will allow players to join matches in progress.

With the CWL Pro League Qualifiers just behind us and a full year of pro events ahead in 2019, there’s never been a more exciting time for competitive Call of Duty fans. The CWL Pro League begins on February 4, and be sure to join us at the second open event of the 2019 season on March 15-17 at CWL Fort Worth to watch teams compete with the newest CWL ruleset in play, and watch in-game on PS4 and online on Twitch at twitch.tv/callofduty.