The player who chooses the Support Class in Battlefield V is one of the most important members of your squad, as they will help keep players supplied and fortified in the midst of battle.

The job of the Support player is to be a mobile ammo station, keeping their teammates stocked up so they don’t run out of bullets, while also ensuring that friendly vehicles are kept up and running thanks to its Engineer combat role.

Support players can also build advanced fortifications that provide some much-needed cover for your teammates, while their ability to create static machine gun emplacements mean that players can capture objective zones from a safe spot.

Light and Medium Machine Guns are the weapons of choice for the Support player, with these heavy duty firearms allowing the Support player to lay down suppressive fire to help keep advancing enemies at bay, or provide a distraction to allow friendly players to move forward, and work best at a close to medium range.

Read More: The best way to use the Recon class in Battlefield V

The Support Class will have two Combat Roles to choose from, with more set to be added as part of the Tides of War update on Tuesday, December 4. The class comes with the Engineer role already unlocked and available to use, but players will need to wait until they are Level 8 before they can use Support’s second Combat Role, Machine Gunner. 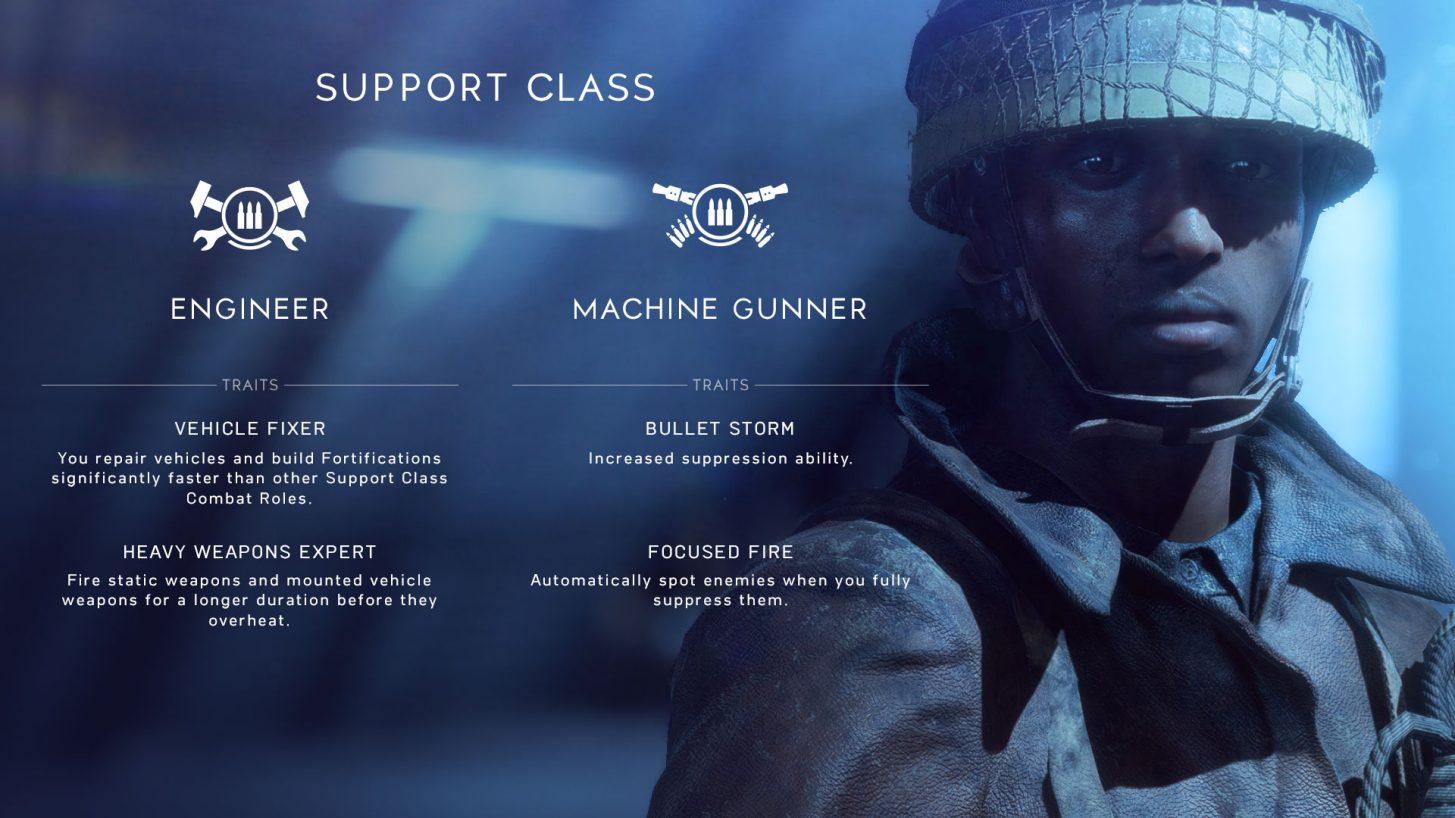 The Support Class has two roles to choose from – Engineer and Machine Gunner.
[ad name=”article3″]

When running the Engineer Combat Role, players can repair vehicles and build fortifications faster than any other class on the map, while the Heavy Weapons Expert trait means you can fire top and port guns for longer periods of time before they overheat.

Read More: How to keep your team alive with Battlefield V’s Medic Class

The Machine Gunner is perfect for players who want to use the Support Class to advance on enemy positions, as the Bullet Storm trait increases your suppression ability, while Focused Fire will help you spot enemies when you have fully suppressed them.

Listed below are the weapons available to the Support Class, along with the level at which they’re unlocked:

Players can also unlock gadgets for the Support class by levelling up, with an Ammo Pouch and the Anti-Tank Mine available from the start.

The Ammo Pouch can be upgraded to become the Ammo Crate at Level 4, with the Anti-Tank Grenade Pistol unlocked at Level 6, and the AP Mine available at Level 11 to help you take down enemy vehicles.