The best way to use the Recon class in Battlefield V

The Recon class in Battlefield V is the absolute best choice for being able to clear enemies off a position in a quick snap without the dangers of close-quarters combat.

Being posted up around each of the Battlefield V maps means you will, at some point, run into someone running the Recon class.

They are the deadly operators of the game with their one-bullet kill potential – with both bolt action rifles and self-loading rifles – and ability to crack open enemy defences by calling out the positions of the opposing team to their comrades.

The main weapons for Recon are all excellent from range but can also be lethal from short distances, provided they’re in the right hands. Couple that with the ability to spot enemies, create spawn options and protect themselves with explosives and it makes for a deadly class.

From the get-go, the Recon class will have two Combat Roles whilst a further two will be added – to all classes – on December 4th with the beginning of Tides of War. The two starting roles will be the “Sniper” and “Pathfinder” options. Sniper is the base role and will be available on release whilst progressing to level eight will unlock Pathfinder. 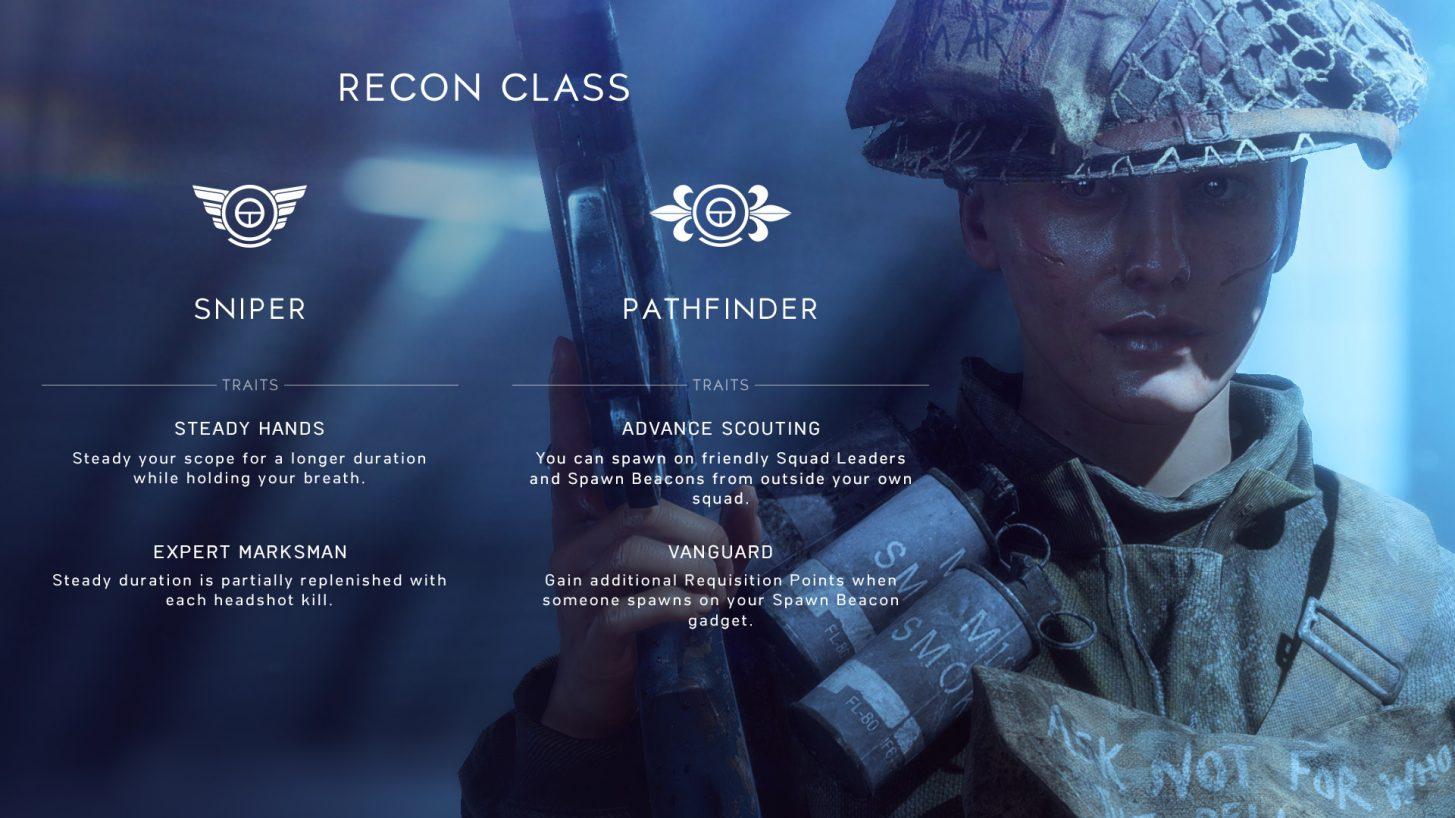 The Recon class is a popular choice with BFV players.
[ad name=”article3″]

Sniper will give the player two traits to play with. “Steady Hands” provides the class with the ability to keep their aim steadier whilst holding their breath and looking down the scope. “Expert Marksman” will extend the duration of the steadying breath with each headshot gained.

Pathfinder, unlocked at level eight, has two traits of its own. “Advance Scouting” will give the ability to spawn on other squad leaders and spawn beacons on their team. “Vanguard” offers up more points for every player that spawns on the Recon’s own spawn beacon.

The table below lays out the weapons for each class and at which level they are unlocked:

The gadgets for the class begin with a ‘spotting scope’ to better see enemies and a flare gun, unlocked at level four, which will display a plume of smoke on an area after being shot.

Other gadgets in the class include the ‘bouncing betty bomb’ which, if placed correctly, will stop an enemy push of the recon’s position. The other gadgets also include the aforementioned spawn beacon and the new ‘sniper decoy’ which will allow the player to place a decoy position to lure enemies.

Grenades, as ever, are vital in Battlefield and the Recon will have access to a frag grenade and a throwing knife from the start and will unlock a smoke grenade at level two.