Apex Legends developers Respawn Entertainment have confirmed that they are making changes to the Charge Rifle, which many have stated is extremely overpowered in the current meta.

The battle royale game is now into its third season, with matches taking place on the new World’s End map which replayed Kings Canyon, and a brand-new Legend in the former of mysterious hacker Crypto.

Players are still hunting down victories in search of being named Apex Champion, but some have found these wins harder to come by, thanks to the incredible power of the new Charge Rifle – which was introduced in the Season 3 patch. 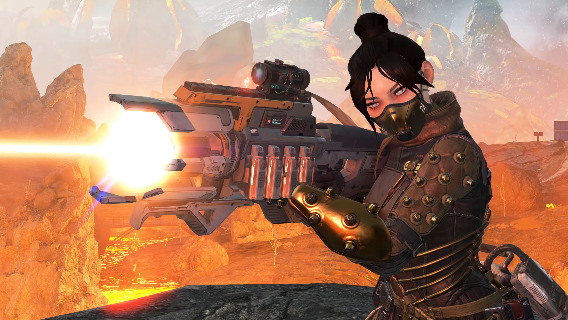 Many players have complained about the power of the Charge Rifle.
[ad name=”article2″]

The Charge Rifle has been an area for contention among many players, who have headed to the Apex Legends subreddit in their droves to complain about the power of the weapon. Unlike other weapons, the Charge Rifle doesn’t fire bullets, but rather a powerful beam which deals a lot of damage, which can be extremely frustrating if you’re on the receiving end.

Now, Respawn Entertainment have confirmed that they are not only aware of the issue, but that they have been working on it, adding the weapon to their development Trello, and confirming that they are making alterations to the weapon balance. 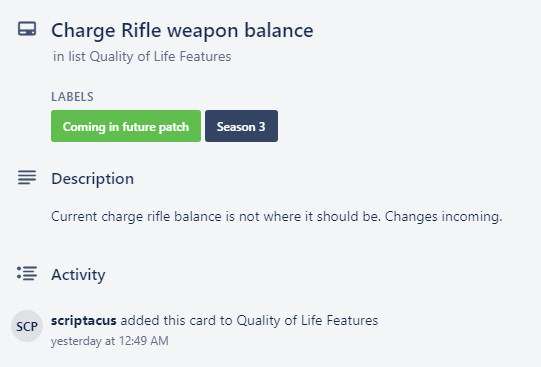 The Apex Legends Trello says the weapon is “not where it should be.”
[ad name=”article3″]

Unfortunately, the Trello board doesn’t actually state what changes they are making to the weapon, just writing that the weapon is “not where it should be.” It’s possible that they may lower the damage output, or make the length of time that the beam is active for shorter in an attempt to nerf its power.

There’s also no confirmed date for the balancing change, but Respawn Entertainment says it is coming in a future patch, and with updates generally releasing on Tuesdays, we could see it as earlier as October 15.