Apex Legends could be set to have a Player vs Environment mode in Season 3, with details surfacing about apparent enemies, challenges, and even new features like wallrunning.

While Apex Legends Season 2 has already given players interesting events like the Iron Crown Collection, anticipation is growing to see what’s next.

Respawn Entertainment has already confirmed that there will be a ‘Voidwalker’ event based on Wraith, but even then, the countdown to season three is well underway. It’s in this next season where, if leaks are correct, the battle royale title could see its biggest shake-up yet.

Apex Legends fans could soon be taking on a number of new enemies.

According to trusty Apex Legends data miner That1miningguy, there are game files that suggest a new PVE mode will be coming to Apex Legends.

In his detailed video on the new leak, That1miningguy notes that the mode – which will be separate from the battle royale – will revolve around ten missions and ticking off objectives on your way to achieving a bigger goal.

These missions will include fighting off enemies in the form of monsters and humans, opening cages, and even defending an area until the Repulsor is online. For completing them, you’ll receive loot and cosmetics that will likely be tied to the PVE mode and not in the battle royale.

There will also be challenges that revolve around the PVE mode, which will involve killing specific enemies, traveling a certain distance, and grabbing kills with headshots.

However, the challenges revealed by That1miningguy also suggest that the long-awaited wallruning gameplay mechanic from Titanfall could be inbound – as well as actual Titans themselves. 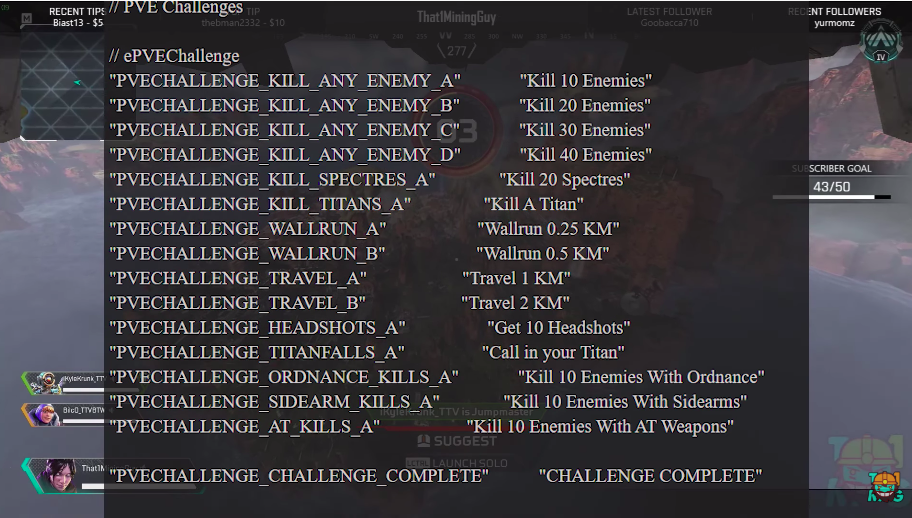 The challenges for season three hint at Wallrunning, Titans, and plenty of kills.
[ad name=”article4″]

While one challenge points out that these Titans could very well be a feature that players use, they will also be an enemy that you need to take down. There is a longer list of enemies involved too, which the data miner has listed also.

While the sight of Titan might cause raise a few eyebrows, especially as Respawn has shut down rumors of the mechanical beasts appearing in the battle royale, That1miningguy notes that they might work better as PVE enemies.

While the leaker suggests that this could all be set to come in season three, it remains unconfirmed by Respawn and should, until that point, be taken with a grain of salt.

Even though files may already be in-game, things can change for one reason or another and what the reputable leaker has on his hands right now could be different to the final release.