A bug in Apex Legends is letting people instantly bypass the long wait that it takes to get revived, but players are finding that it actually does more harm than good.

Now players are diving into the long-requested Duos LTM that’s delivering fast-paced action in concise spurts, as there’s less clutter on the battlefield with two-player squads.

Better off dead if you can’t loot

Twitch streamer ‘Leovanthy’ was in a heated firefight with another duo, when he went all-in on the enemy squad. Even though he managed to take one player out, he was quickly traded soon after.

Luckily, their duo was able to pick up the slack and finish off the remaining foe. It was then when their teammate came to pick up the downed streamer, but it didn’t take as long as it should.

It seems like the teammate just barely tapped the revive button, and the streamer was instantly revived.

While it seems like they were able to catch a lucky break since they didn’t have to wait the six-odd seconds out in the open to get Leovanthy back up, it ended up bugging the rest of the match for the streamer.

Not only did the streamer say that they couldn’t “hear” they also attempted to loot the death boxes of the fallen enemies to no avail. 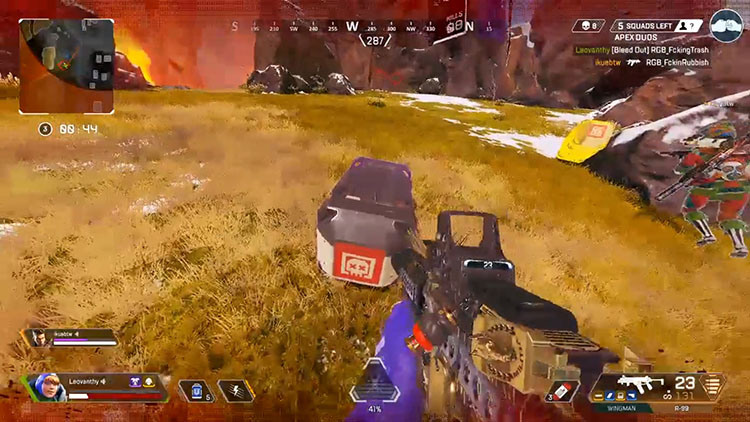 After the glitched revive, streamer Leovanthy didn’t even get pop-up notifications to let them loot the death boxes.

Thinking on their feet, they threw a Thermite Grenade underneath them to see if getting knocked down again would fix the issues but they were actually instantly taken out.

Unfortunately, the bug’s effects didn’t stop there. A little while later, their teammate was able to bring them back via a Respawn Beacon but the issues persisted.

The glitch apparently didn’t let their character ‘Interact’ with elements in the game, which prevented the streamer from picking up weapons or looting death boxes.

A bug as detrimental as this could cause headaches for a lot of players, so it wouldn’t be surprising if Respawn looks to patch it out sooner than later.