Apex Legends players have criticized EA and Respawn Entertainment for what they claim is misleading information regarding the frequency of heirloom gear drops from Apex Packs.

While it appeared that the microtransactions and their drop rates were transparent, an Apex Legends player on the game’s subreddit has revealed that he believes the information provided by Respawn Entertainment is inaccurate, and claims he received little-to-no help from EA when he brought his concerns to them. 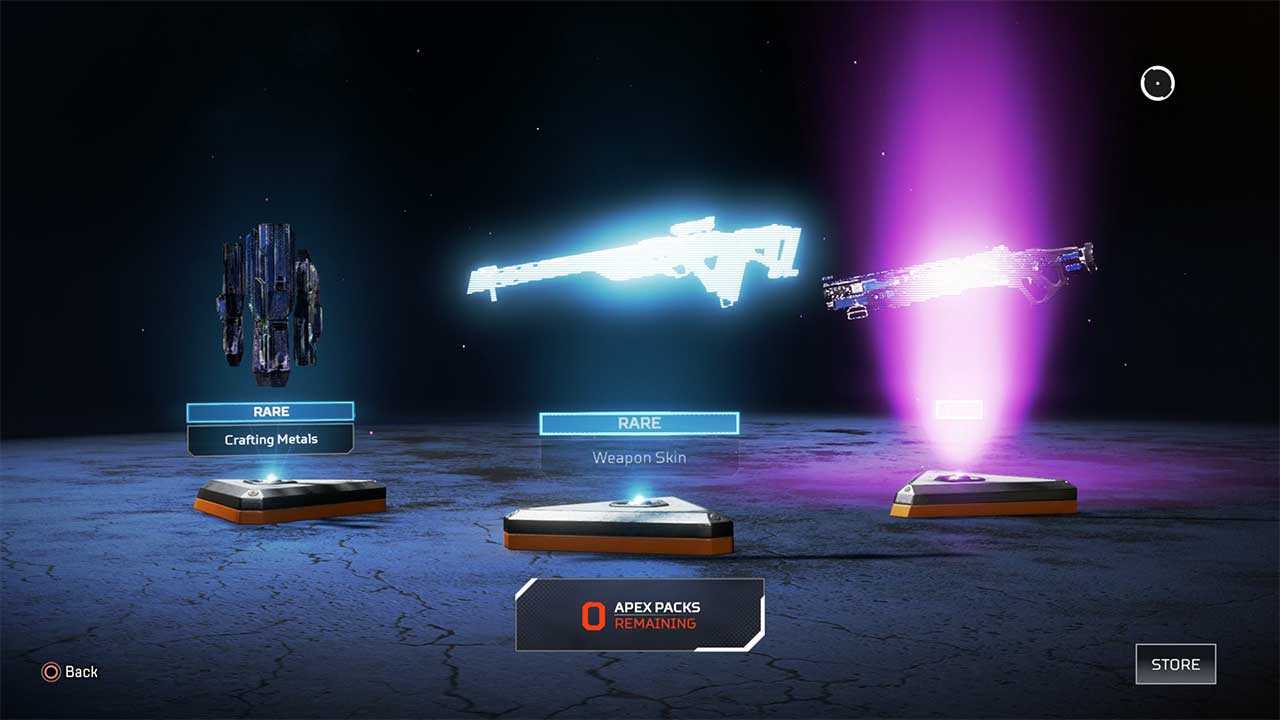 Why are Apex Legends players upset?

In Apex Legends, heirloom sets are a cosmetic set above Legendary, which are extremely rare inside the game.

According to Respawn themselves, while there is less than a 1% chance of opening an Apex Pack and finding one, the game does have bad luck protection, and players are physically unable to open more than 500 crates without receiving the heirloom set.

This may not be the case though, with a player taking to the Apex Legends subreddit to claim that they “opened over 500 Apex Packs for the heirloom, but [didn’t receive] a Wraith blade,” despite the developers themselves stating this couldn’t happen. 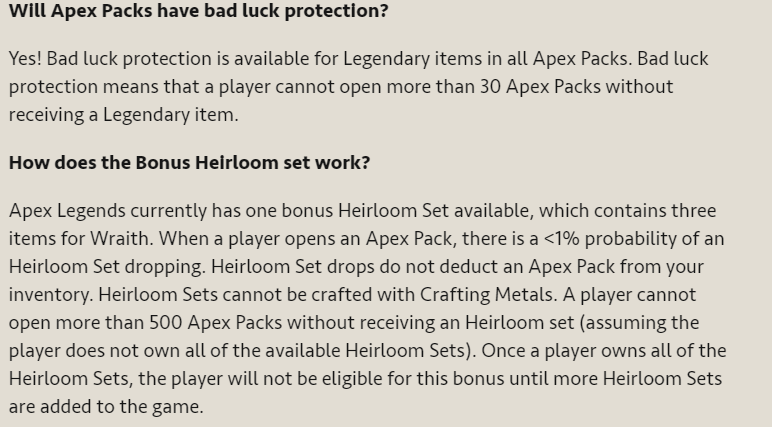 According to /u/OGYungEgypt who posted the complaint, he then tried to contact EA about the issue, who confirmed that while he had opened 500 packs, and apparently spent $300 on Apex Coins, it “depends on your pack luck”, and suggested that he keep opening “more and more packs,” despite the bad luck protection. 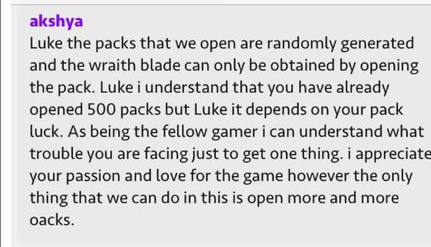 OGYungEgypt claims EA’s response was that he should keep buying packs.

Comment from discussion I’ve opened over 500 Apex Packs for the heirloom for my Wraith main, yet no Wraith blade (or anything good tbh.) Contacted EA and they lied directly to me then actually told me “jUsT OpEn mOrE PaCkS.” I confronted them in the chat, got disconnected. First screenshot is directly from EA website….

The user also confirmed that he “likes the game” and is “happy to spend” money on it, but states he is “unsatisfied” and being apparently lied to.

Comment from discussion I’ve opened over 500 Apex Packs for the heirloom for my Wraith main, yet no Wraith blade (or anything good tbh.) Contacted EA and they lied directly to me then actually told me “jUsT OpEn mOrE PaCkS.” I confronted them in the chat, got disconnected. First screenshot is directly from EA website….

Many others on the subreddit voiced their support, urging him to keep going in his search for justice, and condemning EA for the way they allegedly handled his complaint.

While /u/OGYungEgypt’s claims seem to be legitimate, there is no way to prove that he absolutely opened 500 Apex Packs, although the apparent admission from the EA representative that they “understand he opened 500 packs” does appear to add credence to his complaint.

Respawn Entertainment and EA are yet to respond to the claims that their bad luck protection doesn’t work, but we’ll be sure to update this article with any new information.