Donations have been pouring in after it was revealed that Super Smash Bros. Ultimate pro Matt ‘Elegant’ Fitzpatrick and his family had a moving truck filled with their belongings stolen – and an insane amount has been raised.

Elegant caused a ripple in the Smash Ultimate community on September 11 after a loss at the Wednesday Night Fights sent him into a fit of rage in which he punched a wall.

His mother later revealed on Twitter that the cause of her son’s outburst was because their moving truck filled with everything they own was stolen. Support from the community poured in, and a GoFundMe to help was set up by fellow player Brett Esposito.

The Smash community came together to help

The charity page, created on September 12, asked for donations to help Elegant and his family after their “Uhaul truck with all of their belongings was stolen and has made the process of finding a new home a nightmare.”

It also details how the pro can no longer stream on Twitch since his computer’s CPU was in amongst the items that were stolen.

In just 24 hours after the page went live, over 450 people have donated to the fund, absolutely obliterating the original goal of $2,500.

As of the time of this article, the Smash community has amassed a massive pool of almost $11,000 for the Ultimate player and his family.

The GoFundMe reached a whopping $10k in donations less than a day after going live.
[ad name=”article3″]

Messages of support for the Luigi main accompanied many of the donations, with one fan thanking him for being a huge motivation.

“Elegant motivated me to participate in tournaments, and to learn luigi since smash 4, I’m forever greatful to him, and I hope he gets his life sorted out so we can see him in tournaments again soon! Keep it up my dude!” the message read.

Another donator echoed similar sentiments, and wished the pro and his family a quick resolution from the tragic event.

“Elegant, you are my greatest inspiration in Smash, I want to see you reach the top, so I send you strength and I hope that my little contribution will help so that the incident with your family can be resolved soon.” it said. 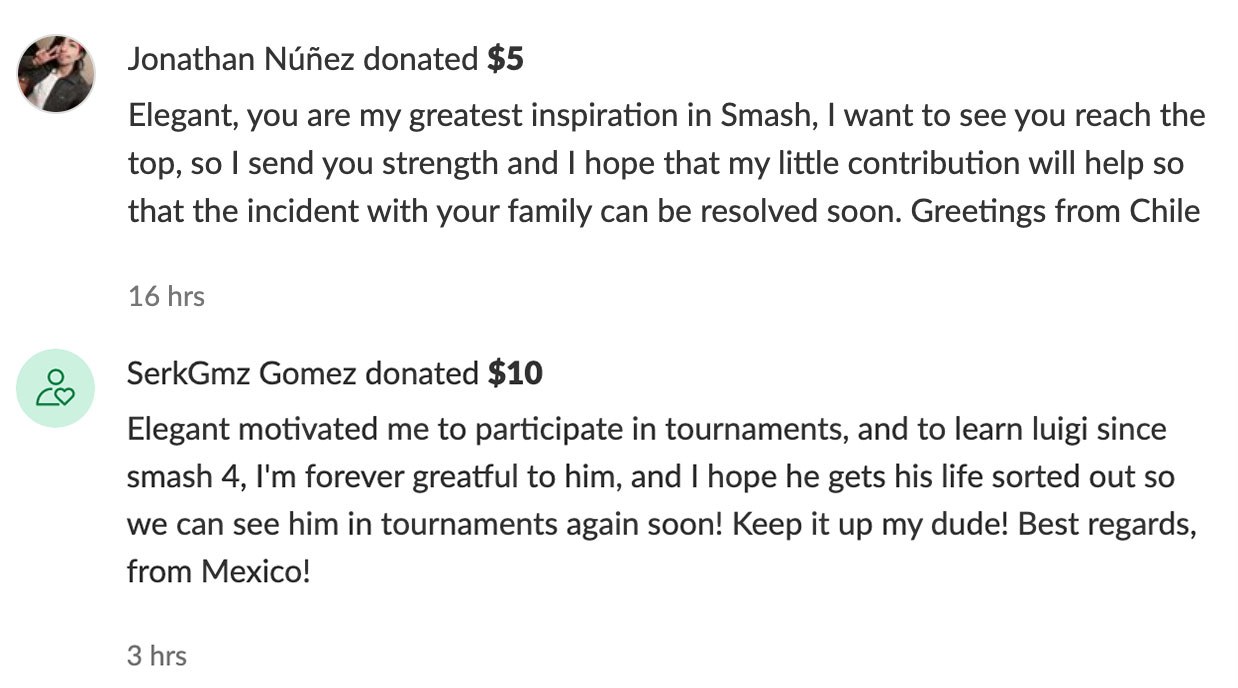 Messages of support for the California-based pro came pouring in.
[ad name=”article4″]

Elegant responded to the GoFundMe

The pro, who is currently ranked 5th on the SoCal All-Time Smash 4 Power Rankings, tweeted out a heartfelt message of gratitude upon finding out that the GoFundMe page had been set up to help.

“I……..I have no words….Lauren told me about this and I can’t believe it, i really don’t deserve any of you. I hate help to so much….but thank you so much everyone…..I just don’t know what to say. Thank you everyone, and thank you Brett/Lauren. I’m really sorry,” he said.

I……..I have no words….Lauren told me about this and I can’t believe it, i really don’t deserve any of you. I hate help to so much….but thank you so much everyone…..I just don’t know what to say. Thank you everyone, and thank you Brett/Lauren. I’m really sorry https://t.co/xH74wj43ab

Elegant is an Ultimate player who is widely regarded throughout the Smash community as the best Luigi main in the world. He signed with Nevermore eSports on July 12.

If you’d like to donate to the GoFundMe to help the pro and his family, you can do so here.