The Overwatch League and beat the Vancouver Titans to take the Stage 2 Playoff Championship.

Throughout Stage One and Two the Titans emerged as the team to beat in the Overwatch League, with a roster made up entirely of the former Runaway Contender’s Korea team, Vancouver took the OWL like a fish to water.

San Francisco and Vancouver met previously in the Finals for Stage One where Vancouver barely managed to walk away with a win. This time though, the Shock would finish what they started. 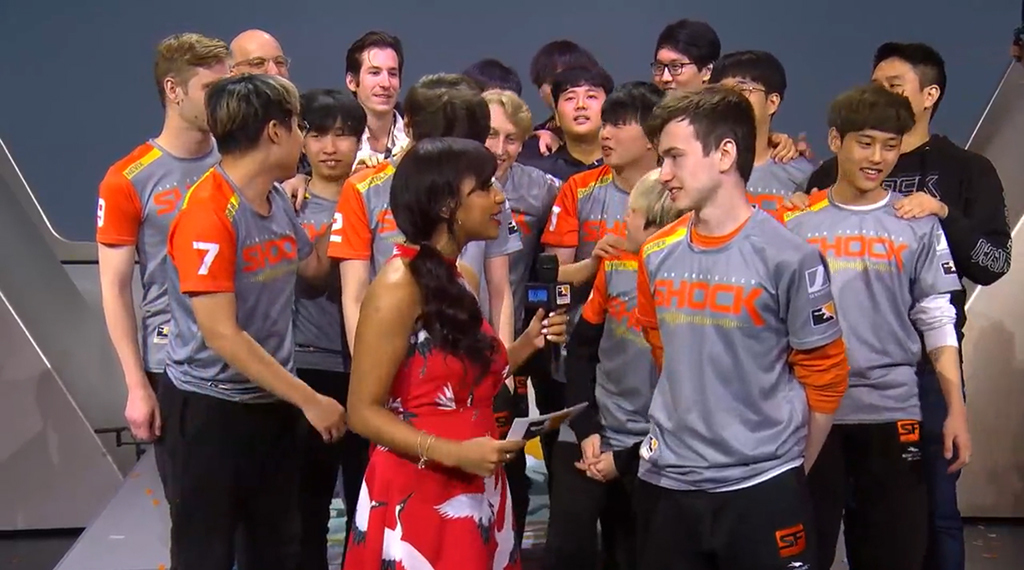 The Shock were obviously excited to win the Stage 2 Finals.
[ad name=”article2″]

The Shock started out the match with a dominant performance on LiJiang Tower, beating the Titans 2-0.

It would be a back-and-forth match though and the Titans would come back to take King’s Row closely by 5-4.

It looked like the Titans were on a roll when they locked out the Shock during a quick Paris round with a score of 1-0.

After that though, it would be San Francisco dominating for the rest of the match, they would take the nest three maps, walking away with a 4-2 victory and as Stage 2 Champions.

Winning a Stage Championship is obviously the goal for any Overwatch League team, but for the Shock, beating a team that had denied them the crown just last stage must have been sweet.

San Francisco were not underdogs by any measure headed into the Stage 2 Finals, but by beating Vancouver they handed the white-hot Titans the first loss they’ve had all season.

Since the Stage Finals fell on Mother’s Day this year, OWL shared tweets from fans about their moms during the matches breaks.

Most of these were the standard, wholesome Twitter fare you would expect, but one tweet that got through wasn’t of anyone’s parents, but a picture of an infamous pair of serial killers.

At least it wasn’t Pepe.

With Stage 2 over and done with, the Overwatch League All Star Weekend will be held on May 15 and May 16 before Stage 3 begins on Thursday, June 6.