Overwatch League pro Daniel ‘dafran’ Francesca showcased why he is one of the most popular players in the scene with a hilarious post-game interview following his debut match.

The Danish pro, who was picked up by the Atlanta Reign during the offseason, helped the Reign dominate Florida Mayhem in a 4-0 series with plenty of fans in the arena chanting his name throughout the game as he made play after play for his squad.

As he was making his Overwatch League debut, the Dane was the one to lead his team into the arena pre-game and then he took up the post-game interview duties after the Reign picked up the victory. While his in-game performance was pretty good, it was in the interview where he really shined.

When asked if he had any words for his fans, to thank them for their support, Dafran hilariously answered: “With the help of Twitch Prime, I really managed to pop off,” causing raucous laughter in the arena.

While the interviewer may not have realized what Dafran had referenced, it was clear to his loyal fanbase that he was selling out on a huge stage and promoting his own stream.

His wise words clearly worked as his own channel begun receiving Twitch Prime subscriptions despite Dafran being nowhere near his stream. 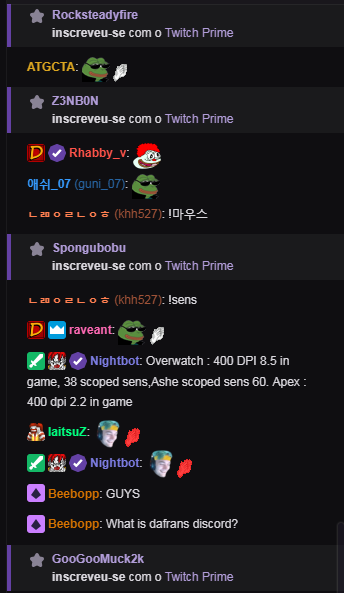 The second season of the Overwatch League kicked off on February 14 with a rematch of the Season One grand finals between the London Spitfire and Philadelphia Fusion. The Fusion were able to avenge their finals defeat by defeating the powerhouse Spitfire squad.

The action continues on February 16 as the Spitfire take on newcomers to the league – Paris Eternal. The Eternal’s fellow upstarts, the Vancouver Titans and Washington Justice, will also be in action, making their Overwatch League bows.