While Overwatch 2 is still far from launch, that hasn’t stopped avid players from putting together a number of exciting ability concepts for the upcoming release.

As unveiled at BlizzCon 2019, the highly anticipated follow up to 2016’s hero-shooter is placing a great deal of emphasis on the Player vs Enemy (PvE) experience. With a fully fleshed-out story mode in the works and a separate, replayable cooperative experience set to accompany the narrative, there will be plenty for the Overwatch community to sink its teeth into upon release.

Showcased throughout a lengthy PvE demonstration at the convention, Overwatch 2’s PvE modes will provide a greater amount of customization than ever before. Allowing players to fine-tune their experience, each and every hero will come with an upgradeable skill-tree with unique abilities to unlock as you play.

While many of these powerful abilities are being kept under wraps, the Overwatch community has put together some genius ability concepts we would love to see in the full release.

Blizzard unveiled a handful of abilities throughout BlizzCon 2019 to demonstrate just how devastating custom builds will be in the future. One was the effects of a new Genji Dragonblade skill, an entirely new mechanic that turned the ult into a ranged projectile.

Running with the notion all abilities can be drastically altered in Overwatch 2, Reddit user ‘cal-nomen-official’ visualized full overviews for a number of heroes.

Starting with Orisa, this new skill-tree shifts the Tank hero and somewhat merges the Omnic’s powers with Sigma. Rather than placing a shield on the ground for example, a new Level One ability could allow her shield to float directly in front of her, blocking any incoming damage.

At the upper end of the unlocks, a Level 50 trait allows players to significantly buff Orisa’s Fortify ability. On top of its original effects, the proposed ‘Immovable Object’ perk would deflect any melee damage back to the opponent and leave them stunned. Battling against AI would ensure that this stun would come in handy throughout all manner of combat, especially within the higher difficulties. 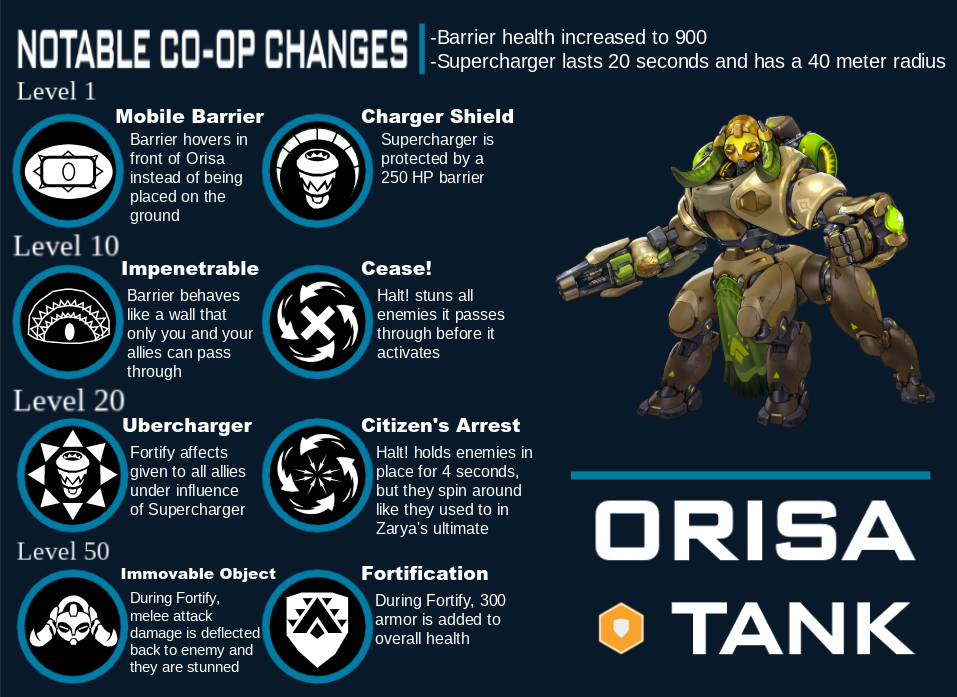 The full Orisa overview features a number of creative abilities that alter the Tank’s play-style.

Furthermore, the creator proposed a number of potential changes for D.Va that could be the perfect fit throughout Overwatch 2’s upcoming PvE experience.

For starters, this overhaul would negate any incoming damage while D.Va is in the process of calling in a fresh mech, meaning that there’s no risk associated with powering up in the middle of a heated battlefield. Players will no longer have to scurry for cover in order to properly get back in the fight.

In a similar vein to Orisa’s Halt or Zarya’s Graviton Surge, a proposed Level 10 ability would see D.va’s Self-Destruct Ultimate pulling enemies towards the lethal explosion. Setting up potential wave-clearing combinations, this perk would be a quick way to wipe out any remaining Null Sector forces.

A truly over-the-top skill that unlocks at Level 50 dramatically improves D.va’s Defense Matrix. As opposed to simply aiming the all-consuming ability, this upgrade would set the defensive field in a 360-degree radius, negating every incoming projectile for a short period of time. 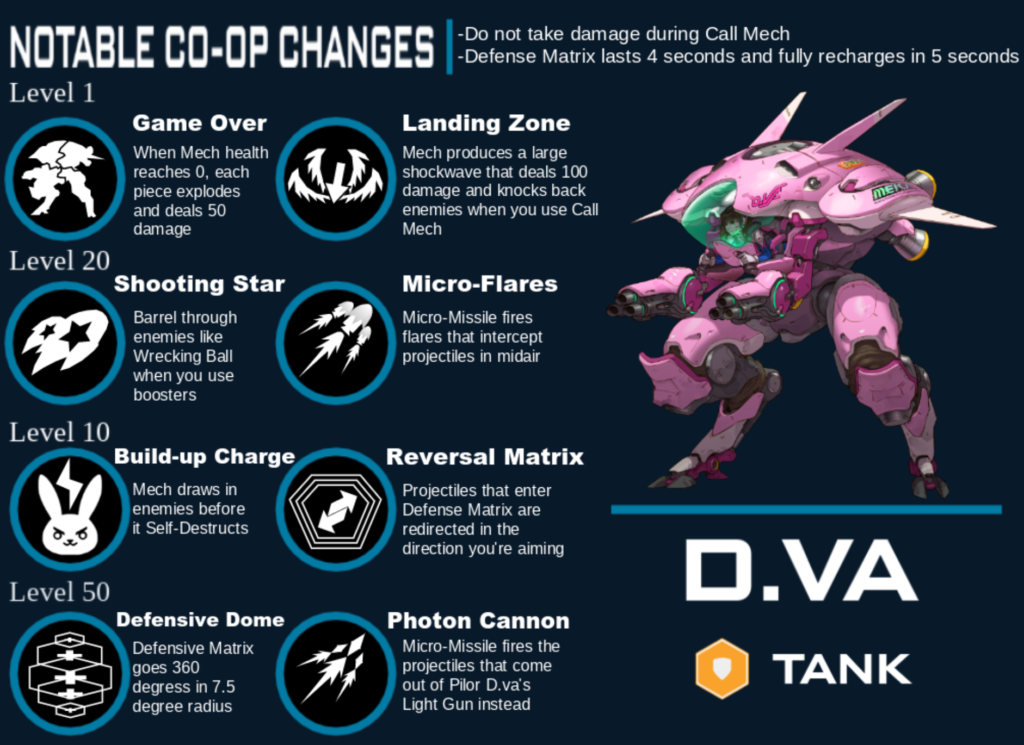 D.Va’s combat upgrades could make her one of the most reliable Tank heroes in Overwatch 2.

There’s no indication as to when Overwatch 2 may be released around the world, however Blizzard Vice President, Jeff Kaplan, explained that the developers “have no idea,” when the content might be available.

Until more official information is released, dedicated players will be left to their own imaginations in crafting a number of exciting skill-trees for their favorite heroes.