Significant changes have already been made to Teamfight Tactics‘ new ‘Hextech’ trait, which is currently in testing on the Public Beta Environment (PBE).

Riot Games announced on July 31 that the next major update for Teamfight Tactics, Patch 9.16, would feature four new champions – Camille, Jayce, Vi, and Jinx –  and an all-new Origin: Hextech.

The Hextech trait is designed as a counter to compositions that rely heavily on items, especially those that utilize one or two major carry champions stacked with items that make them a devastating force individually.

Initially, the Hextech trait caused two or four (depending on the number of Hextech champions on the board) random enemy items to be disabled at the start of combat, but this has already been significantly adjusted.

First, the trait was changed so that the team fires a ‘pulse bomb’ that would disable nearby items for five seconds at tier one, and 15 seconds at tier two. This has now been changed again, to a flat 8 seconds at both tiers, with the difference being in the size of the area affected. The pulse bomb targets a random enemy champion with at least one item. 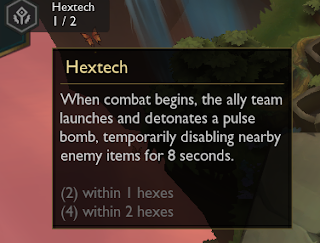 The new Hextech bonus on the PBE.
[ad name=”article3″]

The eight second disable should now mean that those champions hit by it have a chance of surviving long enough to have their items come back online, while still being long enough to make a clear impact if the right units are affected.

There has been a mixed response to the idea of the Hextech bonus overall, with some players claiming that the randomness of which champions the trait affects make for a potentially frustrating experience on both sides, depending on where the pulse bomb lands.

The new champions bearing the Hextech trait are due to go live with Patch 9.16, which is scheduled for August 14, but it seems Riot may not be finished making adjustments to the bonus in the meantime.