The Good Luck Have Fun Game Bar and Chicago Pizza, home to the tragic shooting during a Madden 19 tournament in August, is re-opening its doors to the public.

A Facebook post made by the GLHF Bar revealed that the venue would be opening on Friday, October 5, and will be making some major changes moving forward – including placing a greater emphasis on competitive gaming.

In addition, the Bar will be undergoing renovations, and will contain such features as private booths and streaming stations for live esports events.

“…we have decided to rebuild your favorite Game Bar from the ground up,” the statement reads. “We want to provide a beautiful, fun environment for our entire community that has done so much for us.” 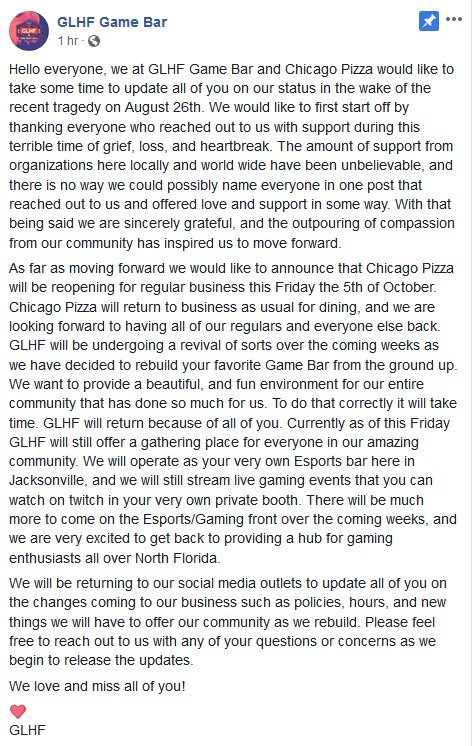 The statement held that more information would be forthcoming in the following weeks – likely good news for attendees.

The GLHF Game Bar in Jacksonville, Florida, was home to a shooting during a Madden 19 tournament on August 26, 2018, which resulted in the death of two players and the injury of eleven.

Both Electronic Arts and notable community members came forward in support of the victims, with the likes of internet personality KEEMSTAR and others holding charity tournaments to help with funeral costs and hospital bills for those affected.

While the adjoining Chicago Pizza will open for business as usual, it seems like the GLHF Game Bar is moving forward with a new initiative to come back even stronger than before.