HighDistortion was playing alongside fellow streamer ‘Leopard’ in the first week of the $10 million Fall Skirmish series, when they ran into the 100 Thieves duo of Kenith and Parallax.

Only Kenith remained alive, with Parallax already eliminated, but as HighDistortion and Leopard pushed Kenith in what was certain to be a kill, the 100 Thieves player left the game.

This essentially took an elimination away from HighDistortion and Leopard’s scoring, which were part of the scoring system for the first weekend’s event.

HighDistortion immediately realized what had happened, exclaiming: “This guy quit, he quit to not give us the kill. That is the most scumbag shit I’ve ever seen in my life. He quit so he didn’t give us the kill.”

Kenith later responded on Twitter, admitting that he was in the wrong, and apologizing for quitting and taking a guaranteed elimination away from HighDistortion and Leopard.

I acted on my emotions like an absolute moron. I am sorry @HighDistortion . I will be doing everything I can to get you the point you deserved. This is the second time I’ve done something so stupid. I’m sorry to also have disappointed people cheering us on. (2/2)

He also explained that there was no recording of his perspective, because as soon as he realized what he had done, he panicked and turned off his stream, and told his partner to do the same.

Thankfully for HighDistortion and Leopard, they were given the extra point for the elimination, after speaking with Fortnite’s esports coordinator, ‘Sundown’. 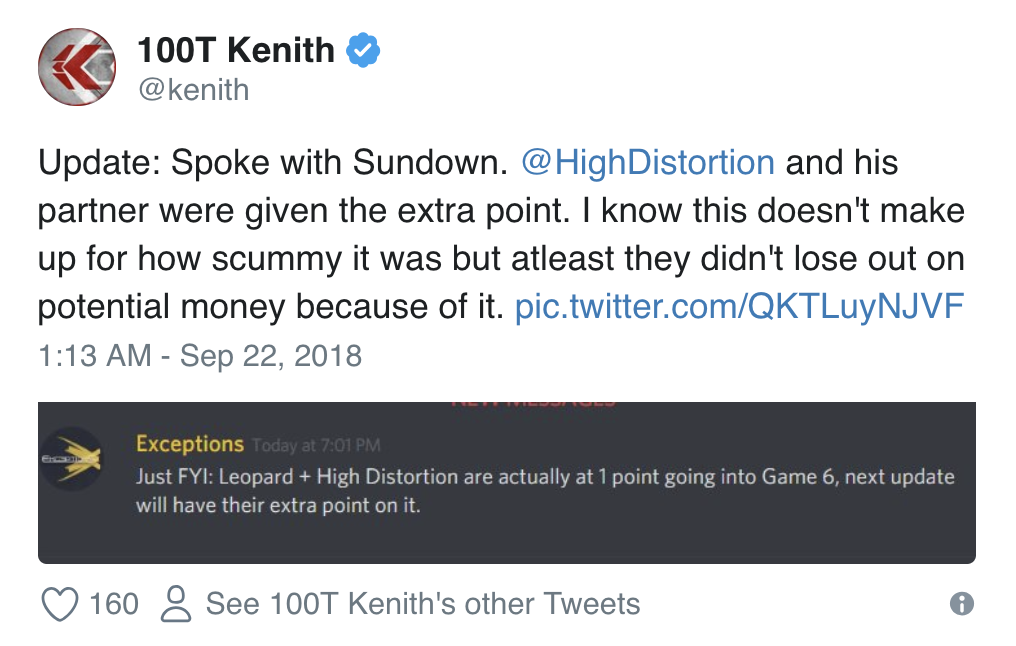