The addition of ATKs in Fortnite has turned out to be a good one, as the vehicles have proven popular among the game’s vast player-base.

The ATKs have opened the door for players, such as popular YouTuber ‘NickEh30,’ to learn how to pull off a whole new assortment of stunts and trick-shots.

In fact, NickEh30 has apparently already mastered the art of sniping from the passenger seat of the vehicles.

He has posted a video on his Twitter page which shows him eliminated two enemy players using a sniper rifle, all while riding in the passenger seat of an ATK.

It seems that he has the technique down to a science; he first drives the ATK in the direction that he needs it to go, then switches over to the passenger seat and pulls out his sniper rifle to take out his opponents.

Perhaps the most impressive part about the whole thing is that he is able to hit these shots while the vehicle is moving at a fast speed, something that is not easy to execute.

Apparently this whole “sniping from the passenger seat” routine has gotten too easy for NickEh30, and he’s looking to mix it up in the future.

In the tweet that contained the clip, the YouTuber vowed to pull off a much more difficult type of trickshot involving the ATK:

…Also, I’m gonna build ramps and place Bouncer Pads on them, drive my ATK up there, bounce off, switch seats, zoom in—HEADSHOT. I’m pulling it off next time! 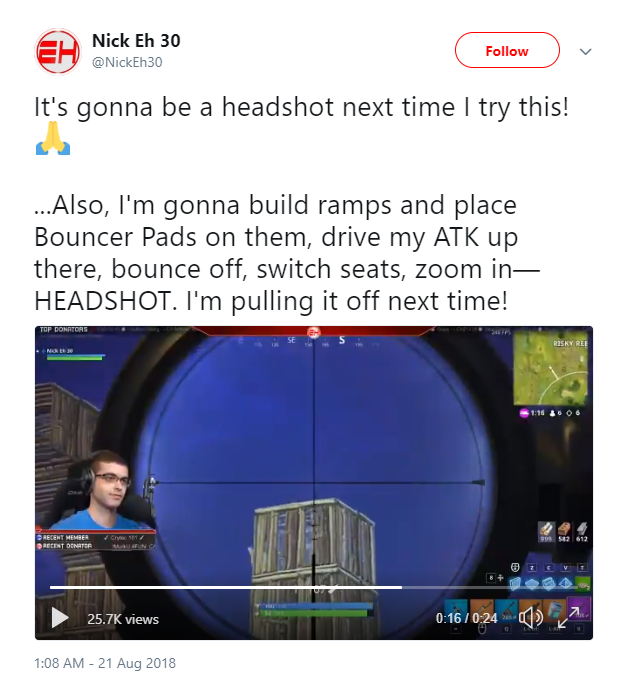