Fortnite Battle Royale players have finally been given a glimpse of the unreleased and long awaited Driftboard vehicle in action.

Data miners have dug up and leaked gameplay footage showing how the new Driftboard will work once it’s added into Fortnite.

As seen in the announcement of the vehicle, the Driftboard is futuristic looking and features a light and dark blue color scheme along with yellow footholds.

It looks very much like a standard snowboard, except for the fact that it hovers about a foot above the ground at all times and can be used to efficiently zip around the map.

A video showing the Driftboard in action can be seen below, courtesy of prominent data miner @JH9 on Instagram.

There are several things to note about the Driftboard from the gameplay footage shown above. It’s got several neat features to it, such as a speed boost that allows players to rapidly accelerate when riding.

Players can use that speed boost and ride off of hillsides to get themselves in the air, at which point they can then perform aerial tricks that will get them points, very much like the Quadcrasher.

As for when the Driftboard will make its debut in Fortnite, that remains to be seen, but the leaks indicate that it will be added via a Limited Time Mode called Driftin’.

Here is the official description of the LTM as can be seen in the leaked in-game image of it below: “Land near a Red Supply Drop, grab a Driftboard and some weapons, meet up with your team and race to eliminate the enemies.”

It’s unclear at this point whether the Driftboard will be available only in this LTM or if it will ultimately be added into the core default modes as well. 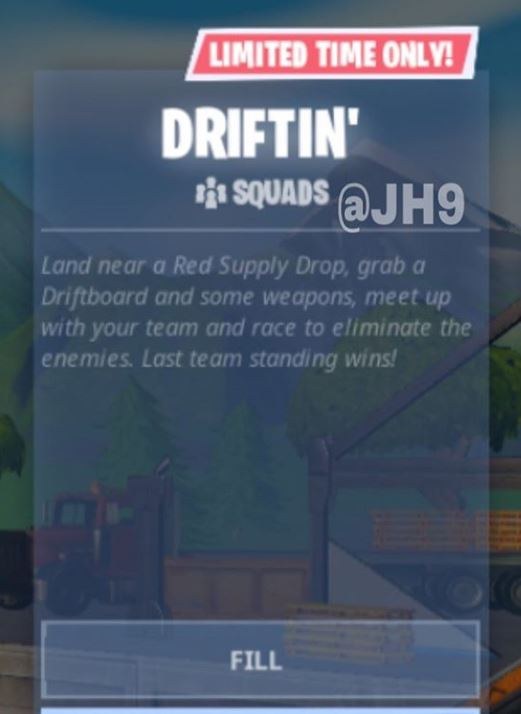 These leaks offer a ray of hope to Fortnite players who have been eagerly waiting to try out the new Driftboard after it was initially announced before the release of the v7.10 update.

Unfortunately, due to last minute issues flaring up, the vehicle was delayed indefinitely and there has been very little said about it via the official channels since.