Fortnite: This item concept would give players an inventive new way to get shields - Dexerto
Fortnite

Fortnite: This item concept would give players an inventive new way to get shields

With Fortnite getting all kinds of new items lately, fans have decided to remind Epic about a fan-favorite concept for an item that would help teams shield up.

Shields are basically a second bar of health in Fortnite, and are essential for players to survive until the final circle.

Players can use a Slurp Juice or other shield items to fully refill their shields and health, but there’s no way for a team to recharge their shields together.

The concept was originally created by user JeremyRyanMiller, who said they wanted to remind Epic about the awesome idea.

The item, called a shield shower, would work like the Cosy Campfire, but would be placed on a ceiling and regenerate shields instead of health.

It would grant two shields per second, up to 50 for each player standing underneath it, just like the campfire. 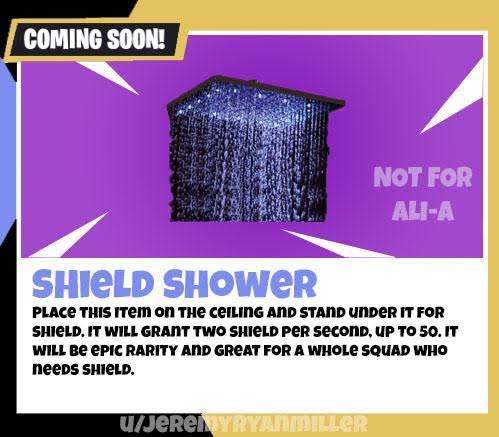 Earlier this week on December 30, Epic introduced the new Boombox item the same day as the $100,000 WSOE Fortnite duos tournament, so it’s clear they’re not scared to shake things up a bit.

Most of the new items and vehicles added to the game of late have been more offensive-focused, however, leaving plenty of room for Epic to add in some new healing items soon.

Epic has said they have big plans in store for 2019, so fans can probably expect to see more new items coming soon.