Epic Games have confirmed that a major change made to the editing system in Fortnite Battle Royale has been temporarily reverted.

The massive v7.20 patch update that went live in Fortnite on January 15 adjusted editing to allow the initial edit of builds to register immediately, regardless of the player’s respective internet connection or server ping.

While the speed at which the edits got confirmed still relied on those two aspects, the ability to at least instantly initiate the initial edit greatly cut down on ghost shots and made the overall experiences much smoother.

While players were happily reaping the benefits of this new change in the day or so following its implementation, some soon began experiencing the pre-patch effects of the editing once again, aka ghost shots and edit delay.

As some of the more prominent members of the Fortnite community began publicly complaining about this issue, @PeteNub, Technical Lead on Fortnite at Epic Games, explained what was going on. 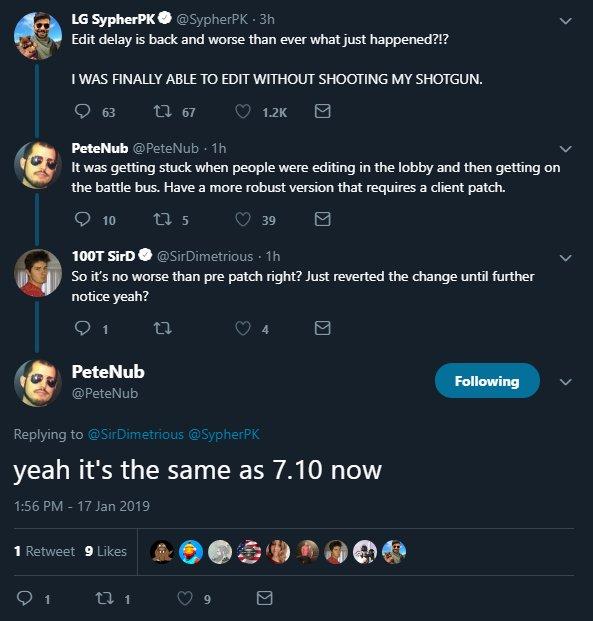 As it turns out, the editing change that was so positively received has actually been reverted because of a bug that was causing the system to get stuck whenever players got on the Battle Bus after editing in the pre-match waiting area.

He also hinted at a “more robust version” of the editing system coming soon, but it requires a patch that would have to be manually downloaded and installed.

This means that the new editing feature will likely not be implemented back into the game until the next update, which will probably go live sometime between January 22-23.

I think the editing got reverted. Can't tell, but it just doesn't feel as consistent as when the update dropped.

As for now, players will have to still deal with the way editing was prior to the release of v7.20, which means more of those annoying ghost shots and edit delay.

Epic Games Community Coordinator Sean ‘MrPopoTFS’ Hamilton has offered new details on this change, assuring fans that the new editing improvements will be added back with the v7.30 update.