Epic Games is continuing to clamp down on cheating in its flagship game Fortnite, taking legal action against two prominent YouTubers who are accused of using and selling cheats.

YouTuber Brandon ‘Golden Modz’ Lucas, who has over 1.7 million subscribers, and Colton ‘Excentric’ Conter are accused of being in breach of the Digital Millennium Copyright Act.

By sharing videos on YouTube using and promoting the cheats, Epic say they breached the terms of service and user agreement, committing “tortious interference”.

The lawsuit accuses both Lucas and Conter of copyright infringement, by “injecting unauthorized cheat software (‘cheats’ or ‘hacks’)” into the game code.

As well as using the cheats in videos, Golden Modz is accused of selling them through his own websites, which are promoted in his content.

“Lucas is operating these websites and selling these cheats and accounts for his own personal enrichment. He posts videos of people using the cheats for the same reason. His ill-gotten gains come at the expense of Epic and members of the Fortnite community.” 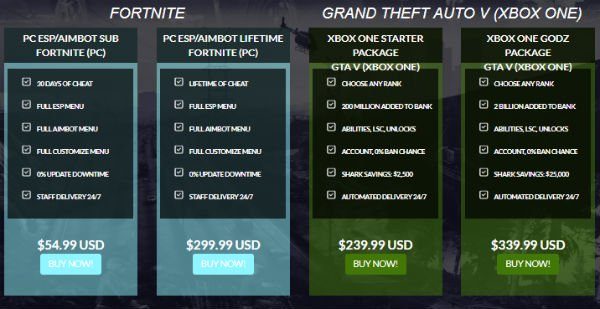 An example of cheats being sold on Golden Modz’ website.
[ad name=”article3″]

Epic has requested that several videos from the two YouTubers be taken down, meanwhile Golden Modz doesn’t believe he is in the wrong.

In a video titled ‘I am getting sued by Fortnite…’, he says:

“I’m almost kind of feeling I’m being discriminated against by Epic Games you know I’m just a kid that’s making YouTube videos and a lot of people were enjoying this.”

Epic want the accused to pay damages, attorney’s fees and “costs related” to the lawsuit.

It is not the first time they have sued cheaters either, including when they filed a complaint against a 14 year old supposed cheater.