Morgausse accumulated a total of 11 points, good enough to lead the field of 100 players. Ghost Gaming pro player ‘Bizzle’ came in second with eight points, which was also how much Team Liquid pro ‘POACH’ got as he came in third.

The points and placements of this week’s Summer Skirmish competition was based on a score system that prioritized both in-match placements and eliminations over a course of seven matches.

Morgausse took full advantage of the format as he got the maximum six points possible in his Match 3 Victory Royale, as he was able to accumulate 7+ eliminations.

He maintained his consistent performance throughout the finals, taking points left and right thanks to strong placements and good elimination totals.

In second place, Ghost Bizzle was able to clutch out a key Victory Royale in the seventh and final match, securing the points necessary to boost him into the top three.

Despite also getting eight points, Liquid’s POACH came in third due to losing the eliminations tie-breaker with Bizzle, which ultimately proved to be a $35,000 difference.

POACH was the only player in the top three to not secure a Victory Royale, however, his eliminations did earn him a tie-breaker against FaZe Clan’s Nate Hill, who also had eight points but came in fourth.

The final top-20 placements list can be viewed below, along with their base share of the $1.5 million prize pool. 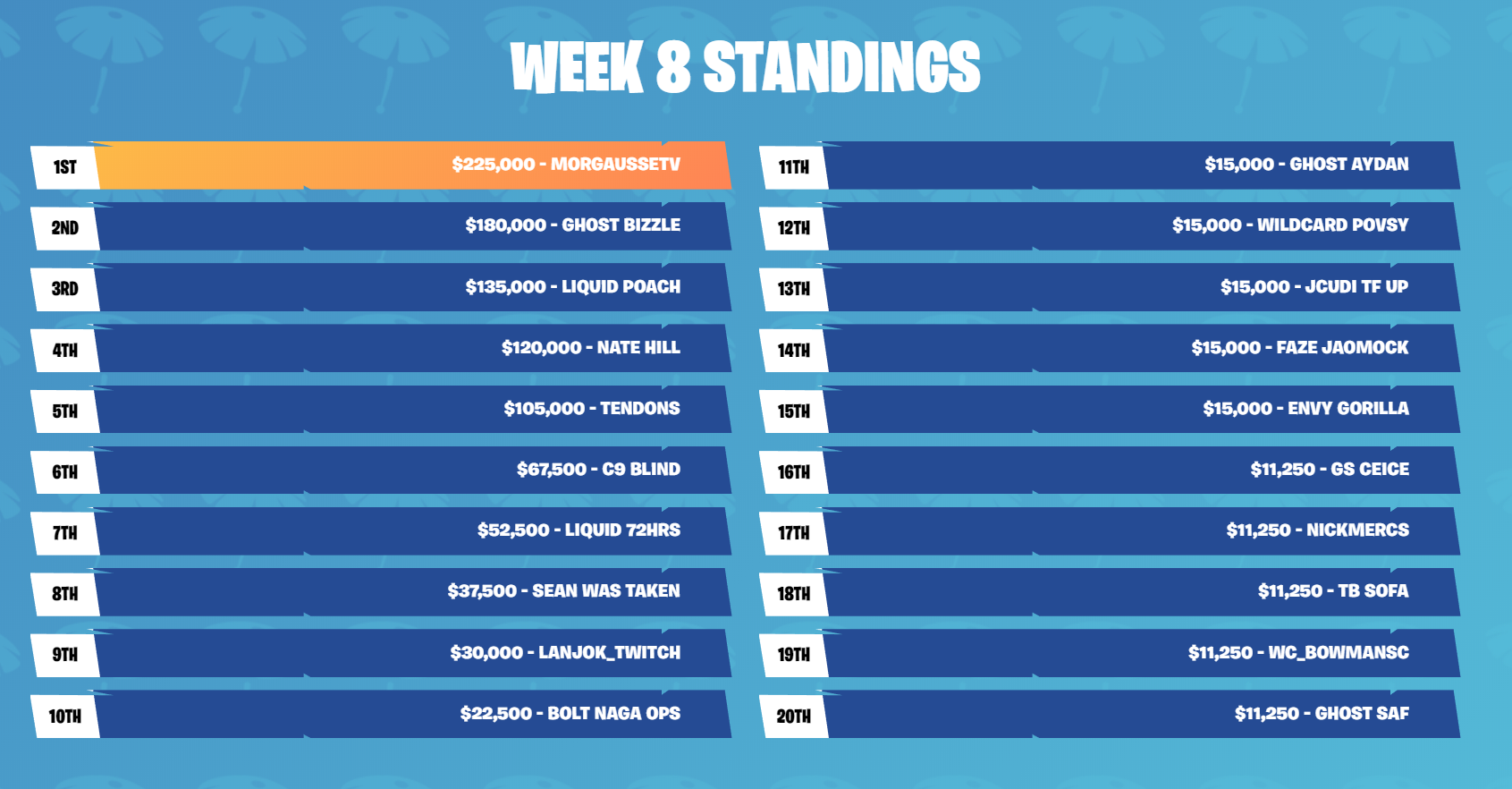 The full and finalized list of placements can also be viewed on the Summer Skirmish standings page down below. All players who placed 21st-100th earned $5,000 for qualifying for the final stage of this event.

In addition to their base share of the prize pool, the following players also earned a $25,000 prize for winning at least one of the seven matches in the Grand Final.

Here are highlights of some of the top plays from the Grand Finals, featuring players that finished in the top-10, including Liquid pro ’72HRS,’ competitive player ‘tendons,’ and streamer ‘Lanjok.’

The conclusion of this tournament brings the end of the Summer Skirmish competition series, in which Epic Games awarded a total of $8 million in prize money.

While the entirety of Week 8’s $1.5 million prize pool was awarded in this final stage, this weekend’s tournament featured a long and extensive qualification process from August 31 – September 2, with the event open to all PAX West attendees who managed to register and met the eligibility requirements.

For general information about the rest of the event, including the qualification process, requirements, and more, visit our information hub here.