A new building may be arriving to Fortnite’s Tilted Towers

The ever-changing Tilted Towers looks set to be receiving an update with the addition of a new building that has been uncovered by Fortnite data miners.

One of the most popular landing spots in Fortnite, Tilted Towers hands players the ability to quickly drop into the action, with plenty of loot available in the many buildings that make up the area.

During the evolution of the game, the area has received a number of changes – with fans even concerned for the safety of the entirety of Tilted during the meteor strike that kicked off Season 4.

Changes to Tilted Towers are not always welcomed by Fortnite fans.

Now, data miners have discovered a new building file in the game’s creative mode files that match the Tilted Towers look. Labeled as ‘T_Icon_PG_TS_Tilted_L_Office_k,’ the new structure appears in the game’s prefab list – prefab being pre-constructed buildings that players are able to pop down wherever they choose.

It appears that this will be an office building with five floors – all of varying sizes – and rooftop access. The different leveling of the floors makes the building seemingly perfect for action – a staple of Tilted Towers. There also appears to be a single plant growing on the top – something that may resemble a small cactus – and the majority of the structure is seemingly made of stone. 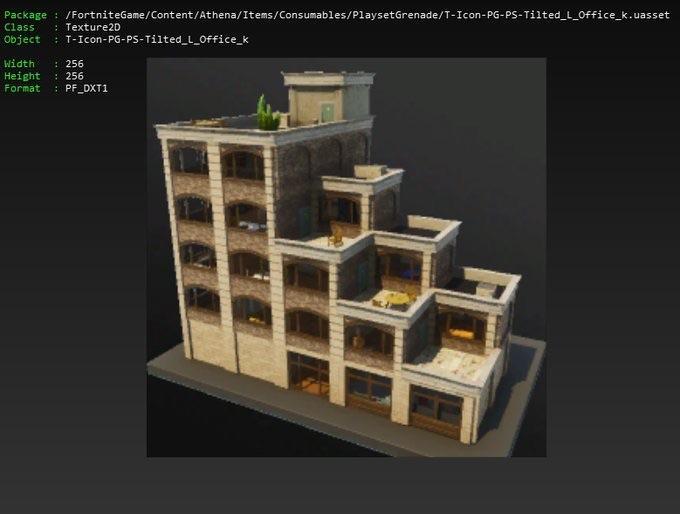 The addition of this building is not yet confirmed and nor is a date on which it could be released.

Being found in the game files points to its likely addition in the near future, especially considering the construction area that currently resides in Tilted Towers has seen progress over the course of season 7.

Whatever happens, be sure to keep your eyes on Dexerto for the all the latest Fortnite news and updates.