YouTuber slammed for his defense after wasting 100,000 paper towels

A YouTuber who used 100,000 paper towels for an experiment in a video was criticized for its environmental impact – and is now under fire for his defense of the video.

YouTuber Tyler Oliveira has over 500,000 subscribers at the time of writing, with most of his content being a variety of vlogs and challenges that get millions of views.

He grew impressive amounts throughout 2019 and is on his way to being a major name in the YouTube space, but he is now being slammed for defending his use of 100,000 paper towels by people conscious of climate change and environmental issues.

Tyler has done a variety of different challenges, including a 24-hour trip to Chernobyl.

On January 10, Oliveira posted a video titled “Can 1,000,000 Paper Towels Absorb A Swimming Pool,” with the premise being very clear. He threw a bunch of paper towels into his pool and tested the results.

While he likely thought this was just an innocent challenge video, many fans commented on it condemning his use of so many towels, including comments about how fellow YouTuber MrBeast ran a campaign to plant 20 million trees – and now Oliveira seems to be doing the opposite.

However, his defense of the video is what has really made headlines, hitting out at the critics and calling out those who have questioned his actions.

In his statement, posted as a comment on the video, Oliveira explains that while he understands some people’s frustrations with his use of so many paper towels, “these paper towels existed independently of whether or not I would have used them.”

He then questions his detractors’ use of paper and wood, as well as the fact that they are “largely doing nothing to benefit the environment.”

He offered three “facts” to the naysayers, saying the following: 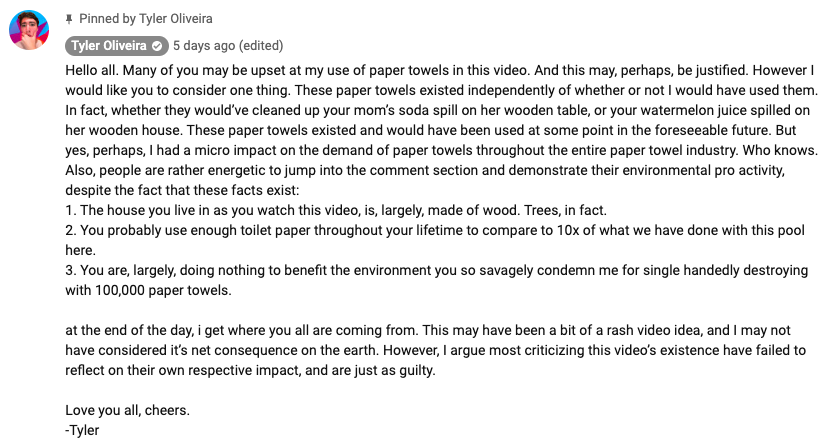 Oliveira called out his critics, questioning what they were doing to help the environment.

In the responses to this comment, a number of people have called him out for his “poor response” to the criticism, while others went so far as to say they were disappointed by this “garbage” video.

Oliveira’s final point is that “most criticizing this video’s existence have failed to reflect on their own respective impact, and are just as guilty,” and it’s not likely we’ll see him address the controversy much further than this.