YouTube king Felix ‘PewDiePie‘ Kjellberg reacted to a web comic celebrating his house being broken into, and explained how hate on the internet is not “normal behavior.”

PewDiePie’s house in Japan was broken into in December, where “90%” of their valuables were stolen according to an Instagram Story by the Swede’s wife Marzia.

However, after a webcomic celebrating the break-in caught the YouTuber’s attention, he went on to explain how hatred on the internet has “gone overboard” with this kind of behavior.

The YouTube star passed over 102 million followers on his channel in 2019.

During the January 4 edition of PewNews, the Swedish star revealed to his audience that he had been tipped off about a webcomic that celebrated his house being broken into.

While he didn’t say who the artist was, the comic depicted a person telling their new co-worker “heh, that millionaire gamer-bro douchebag totally got robbed.” When the “new guy” at her store points out, “Hey, how’d you like it if you were robbed?,” the character is made fun of for asking the question.

Reacting to the art, Pewds said, “This person tries to vilify new guy, but is so tone deaf, they don’t understand they make themselves look like an idiot. It’s so weird. It’s so un-self aware.” 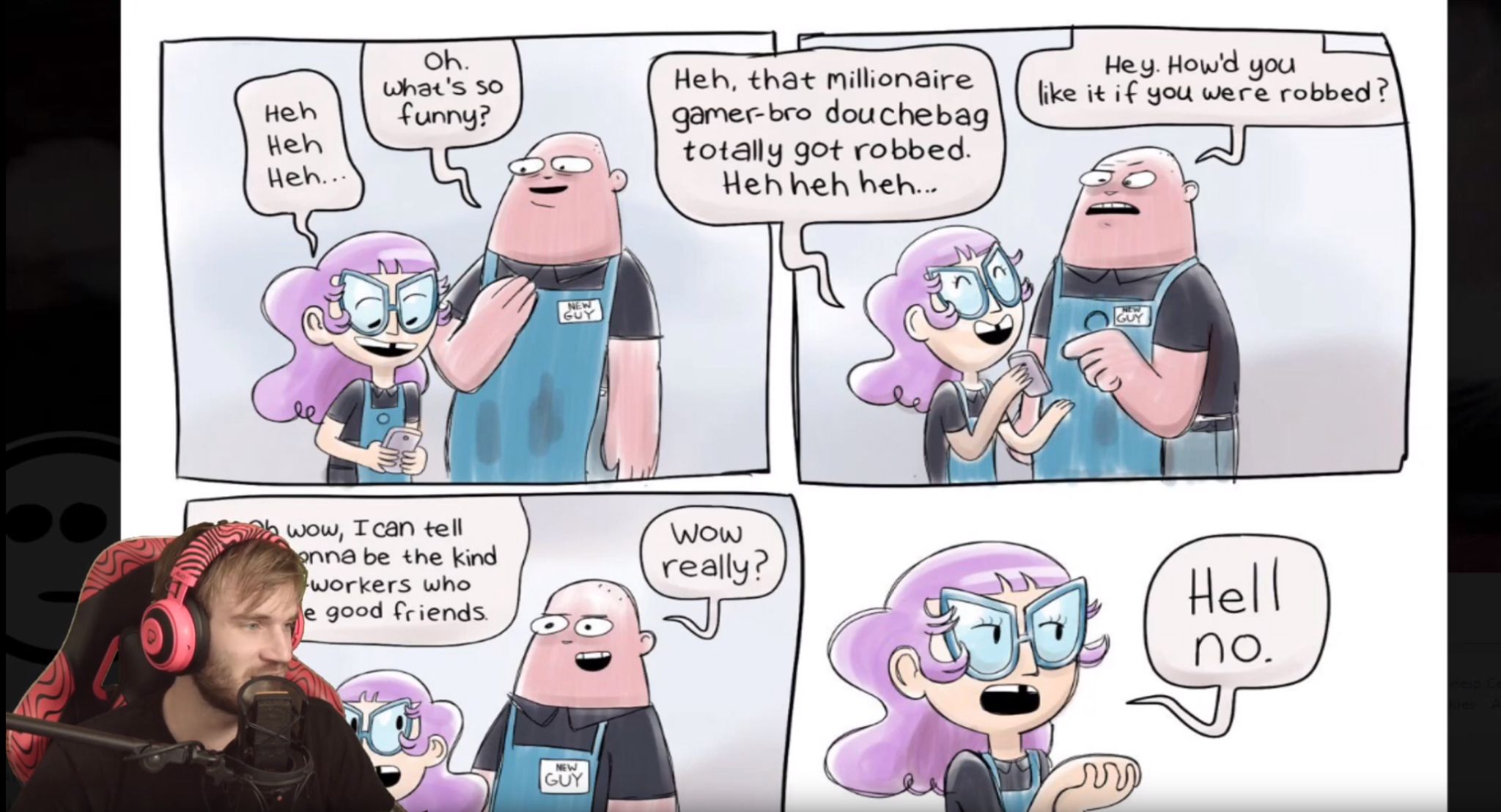 Someone made a comic laughing at PewDiePie having his house broken into.

After the comic spread online, a meme centered around the “new guy” being a hero began trending on Twitter. “He has all the hallmarks of a good protagonist. If he were real, he’d make a good friend,” the YouTuber said as he read a tweet aloud. “I want to be friends with new guy! He seems great!”

“I don’t know anything about this person who made this webcomic. But the point is, people that react this way about something unjust happening to someone, it’s not normal behavior to react this way,” he continued. “There is a clear distinction to me wishing actual harm on someone, or something illegal to happen.”

The Minecraft star then exclaimed, “That’s the weird part and how that line is blurred because I’m a millionaire, when it’s not about the money, it’s the personal space. And it’s weird that no one understand that. It’s clearly gotten so overboard.”

While the comic was in poor taste, the Swedish star didn’t wish any ill will towards the creator, and asked his audience to not seek them out, as it would solve nothing.

Despite the break in, PewDiePie has had one hell of a few months, reaching over 102 million subs on his YouTube channel, and marrying his best friend Marzia in August 2019.