PewDiePie playing Counter-Strike in VR is as hilarious as you'd expect - Dexerto
CS:GO

Felix ‘PewDiePie’ Kjellberg is well known for making hilarious videos on his YouTube channel, so it’s no surprise that his trip into the world of Virtual Reality warfare was extremely funny.

The Swede brought out his VR headset to play Pavlov VR, a first-person-shooter which features popular Counter-Strike maps alongside the game’s well-known purchasing system.

Kjellberg was feeling confident as he hopped into his first game, declaring:”Let’s kill some noobs,” as he stared at the ground. Unfortunately, PewDiePie ran into a problem straight away, realizing that he couldn’t figure out the controls, and didn’t know how to buy a weapon.

PewDiePie was able to solve this problem easily, spotting a computer controlled player beside him and quickly stabbing him with his knife, killing him and taking his weapon.

Still unable to change his weapon, Kjellberg took advantage of a frustrated teammate’s decision to teamkill, allowing him to throw away his current weapon and pick up an AK-47, which he then sprayed wildly at a group of enemies, taking credit for the kills that his teammates picked up. 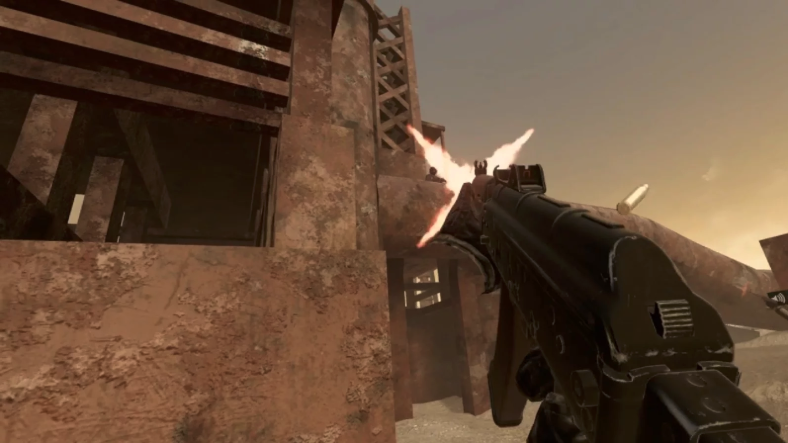 PewDiePie was playing Pavlov VR – a game based on Counter-Strike.

PewDiePie’s adventure in Pavlov ended with the YouTube sensation furiously chasing an enemy player who attempted to throw a knife at him. Demanding an apology, the Swede chased his opponent through tunnels and over crates until he finally got revenge, throwing his own knife and stabbing him in the back.

While PewDiePie’s aim may not have been amazing while using guns, he did seem to have a great time playing the game, and even ran into a fan, who was brutally shot in the head while expressing his gratitude to Kjellberg for the content he produces.

You can watch the hilarious video from PewDiePie below.