YouTube stars Logan Paul and KSI threw down for the final time in the boxing ring on November 9 – but it doesn’t look like their fighting careers are ending anytime soon.

Both YouTubers have expressed an ardent desire to further their status as professional fighters, with Logan Paul notably petitioning UFC president Dana White for a chance at stepping in the octagon after his first fight in 2018.

Although White claimed that Paul would “get murdered” in MMA, his boxing rematch with KSI has put the YouTuber on the map, once more – and this time, the odds put him in favor of fighting with boxing legend Floyd Mayweather.

YouTubers Logan Paul & KSI faced off for the final time on November 9, with KSI winning by split-decision.

With Mayweather announcing that he’s coming out of retirement for the fourth time, boxing fans are rampant with speculation as to who the undefeated legend will fight, and apparently, one of his potential opponents could be Logan Paul.

UK betting platform Betfair placed both KSI and Logan Paul as possible candidates to take on Mayweather in the ring – although the odds are not in their favor, putting the YouTubers at 33/1 against the boxer. 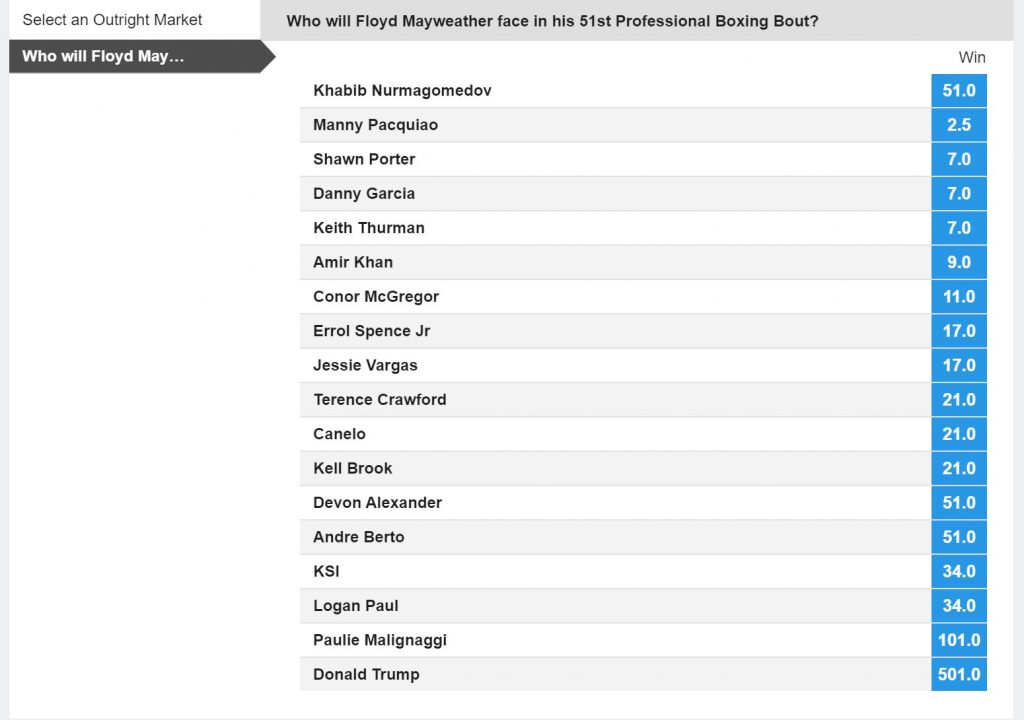 The odds of Mayweather choosing KSI and Logan Paul for his comeback boxing match are quite slim – but they exist.

Although near-impossible, it doesn’t look like Paul is dissuaded by his odds, expressing his curious excitement at the news on Twitter and even issuing a challenge toward Mayweather.

“Bring it,” Paul wrote over a screenshot of Sport Bible’s article on his odds.

While Mayweather has yet to respond to Paul’s callout, some fans aren’t sure that he’s even returning boxing. There’s speculation that he may be switching to MMA after he posed for a photo with Dana White promising to “bring the world another spectacular event in 2020.”

Though the chances of Paul actually taking on Mayweather might be slim, such a change would work in his favor, with the YouTuber claiming that his future lies within the sport during an interview DAZN following his rematch with KSI.

Having already gunned for MMA in the past, it doesn’t look like he’s giving up the dream anytime soon – but the odds are still out on his actual chances of even sparring with Mayweather in the ring.