In addition to revealing his predictions, the host of ‘Drama Alert’ also claimed that this will not be the last time these two meet in the boxing ring, as there may be two additional fights in the future.

According to Keem, KSI will be crowned the victor in the upcoming fight, although it will be by a small margin and in a later round.

On Aug 25th KSI will barley beat Logan in the 5th round.

However, he believes that the result will lead to a rematch bout that will be held in the USA, and Logan Paul will take that fight quickly and early.

The rematch will be in America & Logan Paul will win early.

According to Keem, the action might not even stop there as the two YouTubers will want to break the tie with a third fight, which Keem believes would be held in Africa with KSI taking home the belt.

This will cause a 3rd fight held in Africa KSI will win. 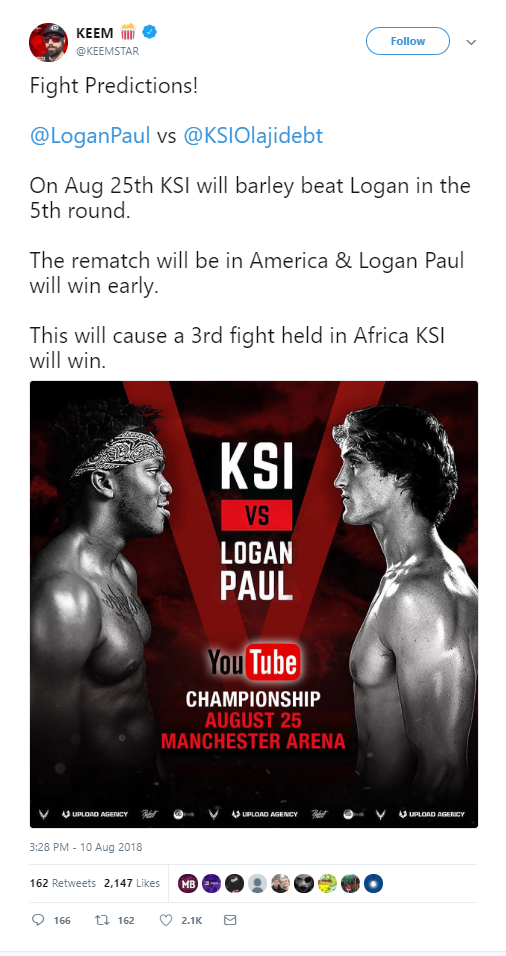 KSI and Logan Paul are schedule to fight on August 25 at the Manchester Arena in Manchester, England.

Likely to be the biggest event in YouTube history, the boxing match will be streamed live in Pay-Per-View, meaning that viewers will have to pay $8 to watch.

While no other fights after the August 25 bout have been officially confirmed, if anyone was to have insider knowledge it would be KEEMSTAR, who has been heavily involved with the fight in the months leading up to it.