Instagram and YouTube star Belle Delphine is back in the headlines after apparently being arrested and releasing her mugshot, but some theory-crafters are not convinced it’s legitimate.

On October 7, Delphine posted her ‘mugshot’, complete with a watermark from the Metropolitan Police, to Twitter with the caption ‘I got arrested lol’.

Later, the YouTuber explained that her arrest was because of her vandalizing a friend’s car, because they had stolen her hamster, and had images to ‘prove’ this. 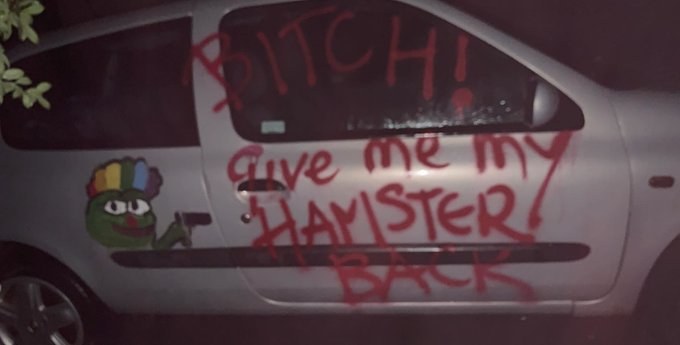 Belle Delphine claimed that she spray painted this vehicle and was subsequently arrested.
[ad name=”article2″]

However, the veracity of this story and her arrest, in general, has been called into question.

Self-styled Twitter detectives were quickly on the case, claiming that the mugshot differed from others taken that same day, and that it’s not typical for Met Police to watermark the images. The image itself could not be found elsewhere online prior to Delphine’s initial post.

Another user also claimed that when searching the Met Police records for her real name, Mary-Belle Kirschner, there is no entry.

You also can't find her here https://t.co/P5blp1VUNB by searching her real name

Others believe it is fake due to the lack of hard evidence, and her penchant for trying to go viral.

She took a break from social media after her Instagram account was suspended, and some believe this could be her angling for a way back into the limelight.

It's fake.
This isn't a real mugshot.
If she had been arrested we would've gotten the news from other source with a mugshot where she looks bad. She's cute in the pic.
It's Delphine, she craves attention and controversy.

On October 4, H3H3’s Ethan Klien had speculated that Belle Delphine had been in trouble with the law, which would explain her disappearance, and then coincidentally, she posted the mugshot three days later.

Klien posted a cryptic tweet in response, perhaps hinting that the story was fabricated to fit in with his speculation.

Great job Belle, keep it up. Proud of you.

So, the jury is still out, so to speak, on whether the YouTuber was really arrested, or if it was a ploy to go viral once more.

Either way, the latter has been achieved regardless, and with interest in Belle Delphine spiking once again, it’s possible she will make her return to her YouTube channel, and perhaps Instagram if she can get her account back.