Call of Duty pro player Tommy ‘ZooMaa’ Paparratto may have landed the ultimate knockout blow on Jake Paul, by roasting the YouTube sensation on Twitter.

The American was victorious in his undercard bout against KSI’s brother Deji at the Manchester Arena on Saturday, August 25, and immediately called out rapper Chris Brown as his next opponent, to the delight of social media.

Paparratto, on the other hand, was decidely less enthusiastic about the potential clash, and took to Twitter to declare that he had had enough of the event.

This fool said Chris Brown, I’m turning this shit off.

Never one to sit back and be silent, Paul shot back, thanking ZooMaa for the cost of the event, which was distributed via pay-per-view on YouTube. 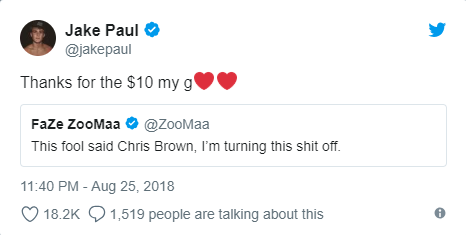 It was the FaZe Clan member who would have the last laugh, however, destroying the YouTuber-turned-boxer by explaining he didn’t actually pay for the event, but instead watched it on Twitch.

I didn’t buy that shit it was on twitch for free.

ZooMaa wasn’t the only person who watched the historic boxing event on Twitch, with over one million people estimated to have watched the event on the streaming platform, instead of the official broadcast.

If Chris Brown does accept Jake Paul’s challenge, the fight will probably take place on the same card as the KSI vs Logan Paul rematch early in 2019. It’s safe to assume, however, that ZooMaa won’t be watching.